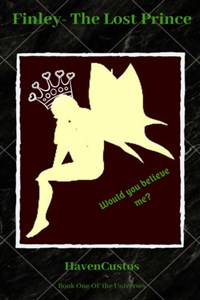 Life was okay for Finley. It wasn't great, wasn't bad but it was okay. He went to a prestigious school, had a couple of friends and a decent future awaiting him.
Or he would have if the people who had abandoned him hadn't shown up with wings, horns and a proverbial wrench for his life plan.
It makes for some strange days when you find out you weren't just an average guy all along.

Book one of the Universes Series.

All Aux Chapters are compiled at:

Discord to talk with me and others (hopefully~) :

A good story for those looking for it's kind.

As of chapter 20, I would say this is a good story. A good style, grammar could use some edits, and the author is doing a decent job to flesh out the character's and build the world. Now my only issue would be that the story seems a tad bit too slice of life for my tastes, like a Disney princess/high school  story, not a bad thing but not what I'm looking for at the moment. All said ,it's a good story if action and mad fights aren't your speed or your looking to take a break from all that,then you would probably enjoy this. Best of luck to the author.

First of I stopped reading after the 14(b) chapter (+ The Finley- Diary Entries).

My problem with this story starts with is its lack of structure and world-building in the beginning. 15 chapter in the story and I still feel like I know nearly nothing of the MC, neither his likes and dislikes nor his personal history or goals for the future. His general personality is a mystery to me.

When the MC gets explained who and where he is, it feels like a huge portion is missing and he simply goes along with everything. Also, his reactions to those changes are either avoided or feel empty. Seriously he gets told he is the prince of a magical race and is told to find a suitable mate because he is only a male and his reaction is nothing...

His behavior at the human school and the school's general "power structure" feels completely unrealistic to me.

Last but not least is the Matriarchy of the Fairies. Now the author wants to write about a Matriarchy and that is fine by me, though it would probably be good if he added a tag for it since quite a few people dislike it. No, it is how he presents it. It isn't just that the females are the stronger ones and inherit everything, no males are apparently a minority that is seen as second class citizens who are crippled by their own parents if it helps a twin sister gaining more magical power. Again fine you can do that, but at least be honest and portray the world as the darker place it is. The MC's reaction to finding out this practice is one sentence where he thinks it's sickening, that's it. That guy is supposed to become a ruler of these people!!

That all said the grammar is fine, the author writes in an easily understandable style and is building an interesting world. But is definitely not a story for me, I am unable to relate to MC even a little bit.

Too much of a hassle to read

The premise sounds great but the execution has much to be desired. My biggest issue with the story is that it is confusing.

The setting is constantly changing with little to no transitions. Every single chapter feels like it begins with a time skip. Character after character after character is introduced without any real depth being given to any of them. Characters often have non-traditional names that all seem to blend together into a pile of blandness. Viewpoint changes happen nearly every chapter. None of the characters are likeable or even personable, at least as far as I have read. Near future events are described but then glossed over or ignored post occurence with no discernable outcomes being made visible to the reader.

It is frustrating because it seems like the author is creating an amazing world, but is keeping 90% of it in their head and not on the (figurative) paper. Every chapter feels like a non-sequitor from the previous one. It is frustrating to try and follow along.