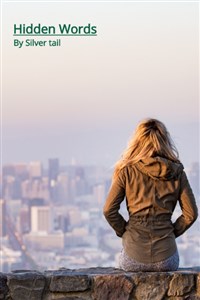 "lady Jade, are you ready to leave," came Terry's voice the hint of America easy to hear.

I looked up holding on to the black long wool coat. Looking down at me with his wrinkled face each line displaying a different story of time. A silver-framed, black glass sunglasses hid his eyes while the rest of his face while uncovered gave away nothing apart from the sight twitch of his upturned lips.

"Oh sorry," I sniffed try not to let him see my tears "Terry, you came."

"Yes lady jade, you phoned. Sorry if you had to wait long," Terry replied placing a hand on my shoulder "the car is waiting for when you wish to leave."

I gave a little nod while whipping my eyes with my sleeve.

"Very well..." Terry starts to say leading me toward the door before he stopped.

"Can I help you?" He asked turning back around.

I looked other to see Zoe standing there. Hands on her hips looking at Terry an angry look in her eye "hey, where do you think you're going with her?"

"Home," Terry said look at Zoe who stood basically the same height as him.

"Jade do you know this person?" Zoe asked turning to me.

"Um yes, this is my uncle butler, Terry," I whispered not looking up at her. I didn't want her to see my face. Or maybe I didn't want to get trapped in hers.

"My mistake I didn't now I had to sign her out if so I will take Lady Jade to the car before signing any forms," Terry replied still keeping his hand on my shoulder.

"You what now?" Zoe faces going from concern to confusion in the blink of an eye.

"The forms to sigh out, you are her carer are you not," Terry replied again in the same tone.

I looked up at Terry before it clicked, "Terry I'm not in school anymore, this isn't a teacher this is Zoe my... flatmate. And that's Wick he also not a teacher."

"Actually I do teach on every other weekend," Wick called over still sitting in his seat.

"Wick not now," Zoe hissed back at him. I just felt pity for who ever had him as a teacher.

"Yes lady, do you wish to leave now," Terry asked looking down at me.

He turned taking me with him toward the door.

I turn back to look at Ruby with a wave I whispered a "bye."

"See ya, Jade, come back soon. Oh and don't worry about the bill I put it on your uncle's tab," Ruby called with a wave back.

I stepped out into the evening's sun to see the black polished car waiting on the curb edge. Terry walks to the back door, opening it wide before turning to me "do you wish for them to join is lady Jade."

I turned to see Zoe and Wick standing behind me, Wick fumbling with the content of his bag and Zoe still giving Terry an odd look.

I took me a second. Did I want to introduce them to my uncle, would they judge me for it. And I... I can't trust myself with Zoe, what if I try something and hurt her. But they came here with me, for me.

"Oh, yes. I want them to come, please," I whispered

Zoe and Wick wiggled into the other back seats with me. The door shut with a click as Terry turned to walk to the driver's side.

"Well that was something," Zoe commented with a sly look

Sorry. So sleepy, dam you life.