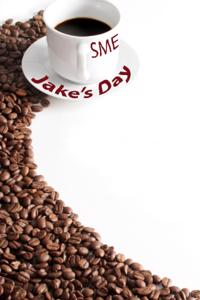 Jake is a good, hardworking man that just wants to get his sister out of the slums and his boss a cup of coffee, but the actions of those around him end up spelling a horrific ending for our protagonist.

This is a branch off from another series I write, The Helena Chronicles.  This takes place several books after the first.  I chose to write this to show the Butterfly Effect and the poor tragedy of Jake, which wouldn't be expanded upon in the series.  Just some random stranger that let a little girl use his phone.