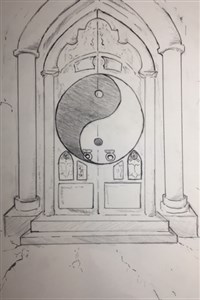 Yeah, this and the previous chapter should have been just a single ‘3: Discovery’ instead of separate.

I’m still getting the hang of this whole writing business.

It had been a few days since the chief’s proclamation, and almost the entire village taking shifts to ensure at least a couple of people were on it at any given time, and it showed results.

At Li Gong’s guidance, the tunnel started at the foot of the hill, then sloped downwards towards what seemed to be the source of the Qi emanations. The strength of the energy had increased during the excavation, to the point where everyone could feel at least a minor tingle if they just concentrated, which was nothing but good news.

The incessant digging kept going at fever pace, until the village’s workers bumped into something- quite literally, as their spades and hoes bounced right off of something much harder than normal soil or even rock. Digging around the strange intrusion, the pair that were currently on duty eventually uncovered the obstruction: it was a dull, bluish-grey gate, built in an unknown architectural style, but unmistakably an entrance nontheless, leading into a long corridor built in the same material and style.

The two looked at each other, gulped, and ran off to notify the others.

Not so long after...

Five people, crowded together in the not-very-large tunnel, stood in quiet contemplation in front of the gate. The chief was naturally at the forefront, stroking his exuberant mustache with a deeply pensive expression. Behind him, Li Gong attempted to stay serious, but the teen’s hands shook with obvious excitement. To his left, “Sage Sister” Yang, a bright woman in her late twenties who had managed to get a proper education at a large city before coming back to her home village, being the closest thing the village had to a scholar or sage, was naturally present. And lastly, the Ming brothers, who had dug up the gate, hopped up and down, attempting to peek over the other three’s shoulders.

Yang was the first to break the silence, speaking in the same measured ‘teacher’ voice she often adopted when imparting wisdom, or just putting weight behind her words.

“Well! The architecture certainly is nothing like ay I know, that’s for sure.”

“M-maybe it’s, like... an ancient, buried sect, f-full of relics and manuals that we can get!” The younger Ming spoke up.

”No it isn’t bro, you’ve got too many stories in that head of yours.”

“Maybe it’s an immortal’s cave?” Li Gong offered. “I’ve heard that sometimes cultivators will shut themselves off and just meditate for a long times, and that the really old ones will completely lock themselves away from the world. It’s what this looks like.”

“Possible, possible... but there’s really only one way to figure out, isn’t there?” The chief finally said, glancing meaningfully at Li Gong.

One of the weirder things that came with being incarnated as a dungeon is this sense of keeping track of everything. I always know which way I’m digging towards regardless of how much I pay attention, always know the time like I’m counting each second individually, stuff like that. I’m sure it probably would be a godsend later on, when I’m ruling a Minas Morgul fortress of monsters and have to keep track of thousands of minions, but right now, all it does is let me know that it’s been exactly eighty three hours, twelve minutes, and fourty one seconds since I’ve been here and Lana has been on my back for most of these.

Oh, I’m grateful for the lessons on magic and everything, of course, but when I mentioned that I had felt some people coming closer with mana sense, she went ballistic. She flew right up and ordered me to make the dungeon ‘presentable,’ and as fast as possible. Thankfully, she recognized that I knew a bit too, and we ended up having a heated back-and-forth about design while in the middle of digging. Some corners probably ended up rough, but the final layout we both were satisfied with.

Everything was built from standard reinforced dungeon stone, in medieval Gothic style, all arches, ribs, and vaulted, fancy, decorative loopy bits. There’s proper terms for all that, I’m sure, but I’m not sure what they are. The dungeon package include some proficiency in architecture, but not necessarily the jargon.

A large, empty entrance corridor for style, filled tall archways and meancingly dark, empty alcoves, eventually leading down to a massive main hall with eight doors lining each side and one large double-door at the far end, from which several smaller passages emerged at the sides of the hall, branching off like from a tree.

Most were just a single dead-end room, but three continued into longer passages- one being the large, obvious one, and two slightly more noticeable others to the sides.

The hall itself was empty- it was designed to look like a dining room one might see at some grand estate, complete with a massively long table crossing most of it lengthwise. However, each of the side passages, in true dungeon fashion, was set with a just-about-random distribution of treasure, traps and monsters. Or trapped treasure. Or monsters with treasure. Anyways.

There didn’t seem to be any magically installed blueprints in my head, so I wound up having to improvise some stuff with my meager engineering knowledge. Stuff like spring loaded chests that shot something out like one of those bad prank boxes, simple, wire-based step-on-this-tile-thing-falls-on-you traps, nothing elaborate.

Creating monsters was surprisingly easy- or, at least, I though it was, until Lana explained to me that these ‘monsters’ were, right now, just the basest level minions I could make. They weren’t areally alive nor could ever be, more or less simple puppets cobbled together with a dungeon’s innate matter-manipulating magic proficiency, then animated with a set of instructions using basic transmutations. These minion-types were usually better suited to carrying out labor that couldn’t be automated for some reason, but too boring or time-consuming for the dungeon proper to carry out. ...Like digging.

Even so, I managed to make some rudimentary humanoid monsters and arm them with some hastily made dungeon stone weapons. They look vaguely orcish, what with their grey skin and crude posture- but the lack of detailed facial features is creepier than expected, especially in the spotty dungeon lighting. Hasty design actually looks kinda decent on a monster.

At least, she promised to properly teach me how to summon proper monsters after this is over- which reminds me, I can feel those guys who dug up the gates coming back- with company.

A note from Rockabilly

Nope, I’m still bad at properly sizing chapters. I won’t even jokingly try to blame it on anything and just up and lazy: I’m kinda lazy and don’t like writing for too long.

Bio: some nerd who likes stories and stuff
I also draw a bit