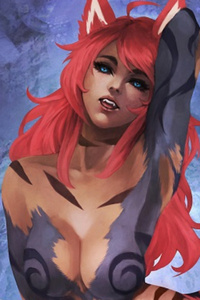 A slime randomly falls into existence. Sapient and born with the ability to recreate parts of the things it preys upon, the highly confused drop of primordial soup decides that the only real thing it can do is become the being at the top of the food chain. A task of longevity in the leaves of the Omniverse.

Potential hindered by the Characters

At the beginning we have a unique and very interesting take on how a monster evolves in its biome. But after he leaves the first environment the characters become kind of flat. Whenever a new character is introduced, it is literally a small description like "he is old, he needs a walkingt stick and has age spots and loose skin". You always tell us, you don't show us.

On the first meetings with girls he also always notices how sexy they are. Literally still a slime-blob, and when he meets Reysha, the first thought our puddle of slime has:

"Helped that she was sexy to boot. [...] she had a killer body as well. Apexus just wanted to wrap around her and slide into her reproductive organs."

Interesting setting, but the characters and their interaction is definetly a weak point.

The story starts with about 80 chapters of fluff and adventure; they're not the best but mistakes can be forgiven because of the story's light tone. Then the story takes a sharp turn into about 40 chapters of tragedy. And not just any tragedy, the kind of tragedy that's easily avoided if people just talk to each other but obviously evil enemies can only tell lies. It's not quite so contrived as to feel contrived, because the characters have established flaws and motivations that can justify refusing to listen, but it's uninteresting.

I don't know what's beyond the ~40 chapters of tragedy because I've tried 4 different times now to push through it, hoping it returns to being good. Every time I conclude it's simply not worth it, the tragedy section is too tired and tiring to push through, especially without any guarantee the story ever returns to its good elements (and even if it gets good again, how long will it stay there?). Better for me to put that effort into exploring a new story.

So as of right now we have several hundred pages of fluffy adventure, followed by hundreds of pages of mediocre tragedy, followed by a few hundred more pages. That means the tragedy section is at a minimum half the length of the fluffy adventure section, and 1/3 of book one. I simply cannot recommend it unless you enjoy tragedy and are willing to wait a long time to get to it.

Starts ok and then we get gratuitous slime sex

At first this is a fun story about a slime learning the world and slowly getting stronger.

However despite being born from oblivion with no shape and only basic animal instincts the shapeless, asexual (as in having no sex) slime blob is attracted to humanoid women. This makes no sense and serves no purpose. At one point this leads to a scene with slime & human sex which is quite terrible and completely sunk the story in my opinion.

Other than that I would say the characters are the weakest element of this story. Motivations are not well explained nor sufficiently explored.

Sliming up the food chain

The story follows the adventures of a unique slime as he learns what it is to be alive. It's a fun read with relatively frequent updates. The cast of crew is memorable but small at the moment. The perspective of the slime is refreshing and captivating. It shows all of the curiosity, bravery, and ignorance of a newborn slime, and the author does a good job conveying this.

The writing style is solid and easy to read with solid descriptions. The worldbuilding is fairly shallow at the moment, but is not the focus of the story yet, and leaves room for expansion in future chapters. The story so far is focused mostly on growth and survival so far, but not in the grindy style of typical litrpgs. There is also a secondary focus on relationships and smut that builds on the relationships.

Reviewed at: Season 2 Epilogue – What now?

Enjoyable read about a slime whos more human than most humans. It's a bit jarring how un-slime like the MC is. Personally I think the story hindered its potential by making it so smutty and romance focused. Especially in book 2 where I lost complete interest.

The world-building is really cool with multiple dimensions and gods not interfering. I really enjoyed book 1, but book 2 I ended up skip-reading.

Well quite decent overall if you enjoy system fics. MC is actually quite interesting, wish I could say the same for the side characters.

The fairy is super annoying (nooo don't kill any humanoids bla bla bla oh no an inqusition is after us), and having a lesbo in the harem is a big no for me, so I'm out.

Good luck author, I'm not hating I'm just giving a warning to others if this isn't their cup of tea.

a solid five stars! up until it isn't!

the style's great, until the end.

the grammar's great, doesn't save the ending as of the "epilogue"

the story's great, until the end.

the characters are great, until the end.

the story isn't over, but "book one" is. and it's so bad, i'd need a thesauras, an AI assistant, and a prescription of anti-depessants to sit here and make up new words to explain how bad it is. I'd have to do make up new words because the ones that already exist are insufficient.

the ending of book one should have happened at the beginning, or near the middle, in order to catalyze the plucky band of heroes into evolving into the next stage of their heros journey.

instead, i can't even explain why it's bad, becuase it's impossible to explain without spoilers, which are apparently only allowed for positive reviews.

maybe it'll redeem itself in future chapters, but i'm not crossing my fingers for it.

If You Have Read The GAMER:

Well you dont need me to say what to expect, but yes it is just as good. Dont read this review and start the story instead and trust the author.

If You have NOT read The GAMER:

The stroy starts about a slime who slowly gets more powers. But, dont think it s just that, the scope rapidly expands and more characters are introduced after a few chapters. Once the pace picks up there is so much to love about the story.

The characters are very distinct and likeable. The antagonist is not generic bad guy and is well developed. The characters have an actual world view and stay true to their personalities. The plot is interesting and at times heart breaking. The choices made by the characters have consequences. And alsthough there are some bad things happining to the protagonists, I think there story conveys that it is not the end and there is a sense of optimism. The world building kics in the middle of Volume 1 and is pretty good, but super detailed right now. The slime powers are well though out and interesting to use in combat. The lewd scenes are a highlight if you are into monster/slime lewds.

Overall I reccomend this story, go read it. And then read The GAMER to get much much more.

I really enjoyed this story and am sad to see that I am caught up. For stories that get posted frequently (like this and The Gamer for example), I usually read it and then don't continue even when there're updates. I enjoyed this so much, I think I will continue reading it when you update it, it's just really good.

While the concept isn't original in the slightest, you do it really well with many twists and turns to the formula. The characters are believable and likable (or unlikable) with good motivation and goals. You have set it up well to be able to continue for a long time to come and with such an interesting story I can see it going far. The sex is much more tame and it is more of a story with the occasional erotic moments instead of an erotica with a good story. All in all, I really enjoy this and am looking forward to seeing what you do with it. :)

Just finished reading up to the latest chapter (Safe leaf 6)
And I really am liking the way you introduced a system for the mc to gain in power without it feeling too rushed or undeserved. Your world building and lore is very captivating and enjoyable to read and think about, and the characters seem fleshed out and feel real and relateable.
All in all, I'm really enjoying it so far and can't wait to read more!