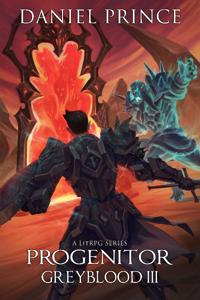 A Shipwreck. A Half-Orc battling for control of his mind. Things that go bump in the night.

Fresh from the events of the Academy's end of year tournament, Half-Orc Lugor and his party are on their first official Guild assignment. Their mission? Aid in the creation of a new settlement on a recently discovered landmass.
Unfortunately, Lugor is finding out that nothing in life ever comes easy. Disaster strikes on arrival and there is no way to contact his mentor Maric for help. The expedition starts crumbling and Lugor must find a way to keep the new settlement from falling apart.
But Lugor has his own personal problems. His monster side is awakening faster than predicted, and if he doesn't become strong enough then the Orc soul inhabiting his body will seize control. With his friends by his side, Lugor is still confident that he can take on the challenges ahead of him.
That is, if the demonic beasts attacking every night don't kill them first.

This story includes the following:

An orc, a dark elf and a dwarf walk into a bar. What happens?

The answer? A riot. Everybody hates orcs, the dark elf's a necromancer, and dwarves are druken little megalomaniacs.

That should give you a quick view of the world of Greyblood. Actually, I don't know about the dwarf, but that's my default view of them. Greyblood is large, bold and unafraid to tell you what it thinks.

The world hates orcs. And with good reason. There's a pretty deep, and dark backstory here, and it makes sense. Lugor, our MC, wants to be an adventurer. The only problem is, he's a half-orc. And he's got balls. The slightest scratch will reveal his hertigae, which is promptly follwed by the rest of his party turning on him and likely killing him.

Never let it be said that the threat of death at any moment ever got in the way of other people's opinion of you, long sweaty tromps through Giant Spider infested forests and running from goblin hordes, a spot of saving the world and getting the girlsz.

Yup, that's not going to stop Lugor, people. A life as a blacksmith's apprentice does not serve to entice our interped MC, no matter how delicious those grind levels might be. There are larger stories at play here too, with a shadowy overmind lurking in the background, but for now, we got Lugor.

The leveling, RPG system, dungeons and monsters are all well done, with twists added to make this a breath of fresh air if you've seen this before. The author knows the tropes of the genre, and plays them to deliver fresh twists, or makes them bearable when he does use them.

I never say much about Style, but Daniel's is actually pretty good. His wordplay and banter continuously improve through the series, as does his ability to draw you in and keep you hooked. Not going to say more.

Now, while I have the impression that we're just getting started, there is already a large, respectable cast assembled here. Our titular half-orc, our dark elf snarky necromancer. Her cat, which deserves a mention. A human blacksmith that gives most dwarves a run for their money at drinking. Adventurers, old acquaintances, Lugor's mother, a badass in her own right. Several hundred files to shave down Lugor's tusks, and monsters. Lotsa monsters. Oh, and an asshole of a villian.

There's little I can say about the cast without major spoilers, so I won't go on. I'll just say this instead. It ain't no Practical Guide to Evil, but it's leaps and bounds above RRL's standards.

To be plain and simple, I love it. Blah blah blah, dafug you still here for? Go and read this amazing story already.

It was going so well

Good grammar (that probably just needs a quick passthrough to fix) and very easygoing and direct style lend itself to readability.

The character traits of the MC are between 'well developed' and 'predictable' for the genre. It's the almost generic 'stern, yet somewhat naive, up-and-coming hero' character.

The story has a few good hooks, some decent worldbuilding, and the characters are generally likeable, relatable, or heck, even appear to be malleable by what they have went through.

Unfortunately, the author decided to stray away from introduced world-building, and put a literal God to drive the plot in an moment of necessity. While not unheard of, it could've possibly be done with greater finesse if it was taken care of earlier and with already given/explained world building tools, which were actually novel and interesting, and could give the fiction a push.

I'm also weirded out by the obvious conflict between what the MC had done and what was done to him in regards to class giving.

The class doesn't appear to get decent benefits from being alone, even though his first 'achievement' was literally soloing a dungeon

All in all, I can't give this fiction more than 3.5. It has good hooks and a decent writing style, but I felt that single moment in execution cost a lot more than it should've.

But I'm probably not the one you should be listening anyway. If you manage to get past chapter 15, then you're a better person than I.

An excellent start but you've probably spoiled some of the story with your synopsis. We know what will happen eventually even if we don't know how it will come to pass. Fix that to keep some suspense going and you'll be golden. Also really can't wait for the updates. It's THAT good. Looking forward to more.

A Fresh look at Orcs

Great interactions between characters. I like the perspectives that were presented and the backgrounds tat are revealed for each.

Personally, I think it had a strong opening and kep with engaged.
No obsene use of stat system to pad chapters.

Overall style and grammar score are high, but could use a light edit to improve.

The story is original and is giving a humanized 'monster' perspective for it which I find exciting.

I think its a killer story and if the pace continues it will be a story that is could easily be one of the better LitRPGs on RR.
Looking forward to more Lugor and crafting.

Funny, thrilling, and funny to boot! If you're looking for good humor, magic, and youthful shenanigans mixes with serious danger...you should give it a shot 😉

I liked the style... Keep the good work dear author

Okay I don't do many of these but here we go..

Style: The author's style is easy to read, but not over simplistic. A different take than most of the LitRPGs with classes not being given out automaticly.

Grammer: I've seen nothing wrong in from what I've read, but grammer is not my strong point.

Story: The author does a great job of making the world. I think the fact that the MC got his class from a god was great. Some chaps are little to much world building, but still not bad.

Character: The MC isn't super OP, he just wants to be like his idol. One of the most human MCs I've read on this site, with the MC's worries and dreams

Overall: Great story, only problem would be the "slow" releases.

Enjoying it very much!

Enjoying this read very much at the moment lets hope it continues. The MC is intresting and the events that happen flow pretty smoothly. Try a couple of chapters for sure!

Good pacing and well thought out

Many litrpgs on RR feel very rushed, leaving little time for any real character development, particularly in side characters. Adventurer Academy has taken the time to establish a setting, and introduced actual personalities. The grammar is good and descriptions are on point.

Well worth a read.

Pretty good so far to be honest , nothing great yet but please keep the power of the protaginist down so the mc doesnt get overpowered. The grammar is very good and i found it abit annoying that there are so few chapters.