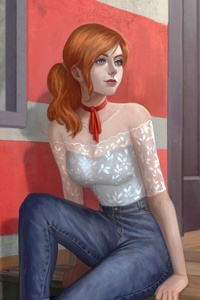 This is a story of someone who's given a chance to redo their entire life starting at the last few days of middle school. Aside from that, it's realistic fiction. Because it's realistic fiction, instead of high fantasy or a LitRPG, the author has time to develop characters and avoid cliches.

In a lot of novels, the author describes their character as "hard working," only for the character to never actually work for their accomplishments. Not this one. The entire novel is about the work it takes to change your life.

In a lot of novels where a character is sent back in time, they make use of some supernatural memory of specific dates to change history. Not this time. Fifty years (or more) is a lot of time to forget important details of major events in history, let alone your middle school class schedule.

I hope this story gets regular updates. This is one that I want to see succeed.

Strongly Suggest this one

It's an interesting context that the author choses. The idea of a redo for your life after living would be appealing to many. That said the author choses some outlandish timetables for the redo and establishes, creating a character that can reshape herself in months. While this is very optomistic for the character I personally think that an allowance of the improvable/impossible is the very reason this site exists. The characters are well thought out, with believable backstories and the author has the ability to accurately portray the multitudes of P.O.V. that crop uI All in all, I have experienced this authors' writting ability and have found myself entertained by the stories that he has created and hope that others will at the very least test it out for themselves. I find these stories to be as well thought out and written as my other favs such as Savage Divinity, Forgotten Conqueror and in a rather new case the Mother of Learning. I realize this may seem like I've jumped to conclusion but there have always been a very small number of personal favorites that I have managed to find on the internet. This author is one of the select few I thoroughly enjoy reading from.

Reviewed at: 34: The music just right for Elena.

This is like nothing I've read. I haven't found anything like this. It is good enough my wife started reading on the site as well. Found nothing else she liked and sticks with her Harry Dresden or quidditch friendly worlds. But this resonates. That's a unique, valuable and worthy thing. So I just want to contribute in a small way and say thanks.

by Nicholas Obviouslyfakelastnamebecauseprivacy Tuesday, December 11, 2018 12:04:47 AM

The story is absolutely perfect

1. We have a naturally likable protagonist, and while she doesn't seem to have any outstanding flaws, she doesn't feel like a perfect Mary Sue and had to work hard to lose weight. Although the MC is erring dangerously towards a Mary Sue, she's still relatable and likable.

2.  She has no OP "advantages". She doesn't know stocks (although how brain-dead do you have to be to remember that apple rose quickly) and she doesn't know lottery numbers. If this is a wish-fulfillment story it's a very good one. The character is goal-oriented and doesn't just screw around with mountains of cash

All is great. Except for the update schedule, we need MoOOOOOAR!

Reviewed at: 31: Released from the hospital.

A great start for this Do-Over story, I really like what you did with the character of Tabitha: wholesome and focused but not to the point of becoming a Ms Perfect, a real danger in the genre. Also appreciated the references to its common traps (and tropes), like the stockmarket, and that you focused on the contrary on character interaction. In this case, ordinary is good, in light of the drastics changes you depict in Tabitha's life.

I already am hooked to the different characters of the family, even the little cousins always taken together, which make sense. For now there is maybe one minus to this perfect score : her father who seems just a little flat, but it is still the beginning.

If I need to find a fault, it is the rythm a bit rushed ; I hope that down the road the story will take its time a little more. In fact, seeing the care of the incipit, it looks like you are in for the long haul, so don't hurry and instead keep up the goodwork! And maybe search for a better title? This one is honest, true, but in terms of attractiveness for new readers, I'm sure something better can be found.

I thought of quickly skimming through the first few chapters. Here I am, on the last page of the story, and it is morning outside.

We are following Tabitha Moore, a woman well past her prime. An incident occurs that sends her mind back in her own body. Back to her childhood that she hated so much. Back into her accursed fat body. And back to her family, school and many other troublesome and painful things.

Is this a story of wish-fulfilling 'I'll do everything right and save the world' type? It's not an opposite type where everything goes wrong in many more ways, screwing the protagonist's life.

It's a realistic story of a woman reverting back into the girl and struggling with her life once more. And the struggle is not of the kind you'd expect, not 'oh I don't want to do it,' or 'another force shows and screws all the plans,' no.

But I suggest you read it yourself to find out.

The quality is way beyond RR. It belongs to a published book of an experienced author. Consistency, characters, plot, everything is beyond expectations. I'm surprised to find such a mature read here.

Hope, you'll be surprised, too.

PS: It actually made me do workouts again.

Reviewed at: 35: Moore and Moore problems.

This story is written by a writer. Not just telling a storey, but many, with an economy of words and method refined to the point that it seem like natural conversation and high literature converging in reality. In a meta homage to the craft the notes and analysis are in the plot.Characters are developed by word, feeling, thought, need and deed. Each a required facit to illuminate the inner colour and brightness to full effect. Each living jewel balances the crown, heavy upon the main character's head. Everyone carries this great responsability to make the most of their life. The choice of what that means is entirely personal.

Where the hell do I even begin? In describing some of the novel I'll spoil parts of it and that'd be robbing anyone who reads this review of the enjoyment of finding out for themselves.

TDLR: This novel is worth your time, read it and enjoy it as I have. With each chapter read I felt myself drawn further into the web the author has spun, at only four chapters I'm hooked.

A story with Depth

This story is excellent. It is a typical concept with a twist done well. It makes you think how hard it would be to do what this MC wants to do.

If you could go back to when you were younger what would you change?

How much do you relaly remember about your high school friends or classmates?

How useful is your knowledge of 'the future' really? And who would listen to you if you tried to later it?

This is the story I look for eagerly on RRL right now. I thoroughly enjoy all the others, but this one stands out, it is different, well written and easy to picture in my mind as I read it. The author knows to write characters that have flaws, have positives and negatives, and are clearly shown to be influenced by society and the times they live in.

This is one of the few stories on this site that makes me actaully think about it when I'm not reading it.