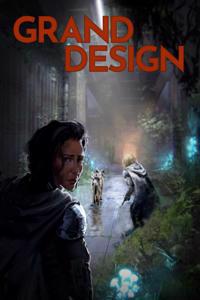 Humanity once ruled space, building an empire that stretched across hundreds of stars.  Now Earth is a cold cinder in the void, its colonies and ships annihilated in an instant.  For five thousand years the surviving races have huddled in the dying light of those few stations which avoided total destruction, eking out their existence in the shadow of the long-dead humans who built their homes.  When a piece of that lost legacy resurfaces, the few who still remember humanity have one last opportunity to find the truth and avenge the fallen.

This is definitely one of the best written stories on Royal Road.

It can get a bit heavy at times, and some of the characters can seem a little to similar, but over all thoroughly recommend.

Looking for great Sci-Fi? Here it is!

People often say it's hard to find good sci-fi on Royal Road.  Well, here it is.  It's base is a space marine story, but it's shot through with mind bending weirdness and delightful surprises.

Reviewed at: A New Story, A New World (II)

It made me laugh, it made me cry, and that is the best praise I can give a work of fiction regardless of the medium. I'm still reeling from that sense of loss that grips you whenever a particularly engaging narrative ends, and your mind is churning, and you're particularly susceptible to dithering so I'll forgo a structured advanced review and cut to the chase:

Grand Design is worth your time because it subscribes to William Faulkner's statement that the only thing worth writing about is the human heart in conflict with itself. How would an impossibly ancient soul carry along the last dying embers of a civilization? How do you not buckle under the impossible weight of such a responsibility?  If you answered that you can't, you're correct. If you answered that you would need help, you're correct. The struggle between responsibility and the existential tiredness it generates is the beating heart of the story and the fulcrum of its protagonists. That in turn makes them satisfying, realistic, and deeply, deeply sympathetic characters. You feel for them. You feel with them. Which makes for particularly poignant triumphs.

The story itself is well paced and consistent. I still feel it's too short but that's the sense of loss speaking. As for style and grammar, I'm still floored that Grand Design was the author's first foray in full-length creative writing. It's remarkable and a great promise for future stories.

And finally, please understand that while it may not be the standard fare on Royal Road, it is one of those hidden gems you keep hearing about. Thus, whenever you have a spare weekend at hand, do yourself a favor and give it a read.

Genuinely a great read from start to finish.

It had all the elements of a great novel, a great scifi and no cliffhangers but you always end the chapter wanting more.

Not what's on the can.

The synopsis up top gives the impression that this is a dark themed space opera. Surviving races of the apocalypse, yada yada … After the first 5 chapters, I must say I do not have that impression.

An expressive side-cast, as well as morally ambiguous but funny main characters, do not convey that same glum feeling the blurb gives. Sure, nothing is rosy, but this is somewhere between Cowboy Bebop and Song of the Void tonally as well as thematically. Not dark. Not desperate.

Its not often i /follow a story at the end of chapter one, first time in fact i believe. (Leans down to look overthrim of his glasses, holding unwavering eye contact- i never thought in a millio years i would 5-star, favorite, and comment, in the middle of the 2nd.

"She stepped back, one hand at her side and the other clasped in a fist against her heart. Tears glittered in her eyes as she spoke words that had not been uttered in five thousand years.

DAMN. With all the crap going on irl right now, ill own it, that brought a tear to my , it didnt fall, heh, but we want this right now. We want to feel this, to touch that remembrance of "that old strength which moved earth and heaven"...

Finish this. Publish it. It is pure and strong and, ive read hundreds of real novels and i know- this one is sleeping, whole, inside the stone.... Let it out.

The characters are interesting, dimensional and vibrant.  The history/lore, even so early, is compelling too.  I want to KNOW what happens, follow them on what will no doubt be an epic journey!  The scale, five thousand years?? What could have happened..    its brilliant.

Stlye wise, you can just tell the gold from dross after a while, it has the weight, the timing, cadence.  This wasnt translated,or if it was, it was the guy who created both languages himself lol.   Its smooth, and has shading, nuance already.

I dont pay much attention to the letter of the grammatical laws, i care if things feel right, if its smooth and rolls off the tongue. If it doesnt have me stumbling along, rereading sentences for meaning, and this doesnt.   Its a real pleasure to read compared to many stories ive read online which i still love, but this flows.

Introducing the decrepit old hag she meets in chapter two, and having her invoke the power of a vanished race, becoming youthful and healthy in a few moments, while the tension soars as news of a last great vessel crackles to life in front of the tired, world worn main character... Then she steps out and salutes, a member of an ancient order, shining and ready to fight for them, for us.  Awesome.   Its Tennyson's poem come to life :)

Sometimes I read a story here and think, "Man, this is really good for RRL."

This isn't one of those. This one is just good, period. If I'd bought it in paperback from...hmm, Tor, probably, I would have considered it money well spent. This is novel-grade, publishable writing and the author should probably consider getting an agent.

The characters are interesting and have some inner depth. We're well beyond "no grammar errors" and into "skilled use of language and imagery". There are some nice turns of phrase; the craft of the story is good.

I found this story three days ago. I laughed. I cried... manly tears. I was completely blown away. This was a massive space opera about what is human. We slowly learn what happened to the human race and just how bleak and hopeless the future is. An then those left behind say "fuck that shit." Wow.

The characters have so much depth I'm pretty sure the author is really a 4D creature masquerading as a human.

The Grammer and spelling is excellent.

The science isn't as hardcore as something like David Weber, or Larry Niven, but the story certainly is.

Read it. Just be careful because your emotions will be raw for a few days.

Reviewed at: A New Story, A New World (II)

* Well, it's more of a small caste of characters - there is no single MC.  This is a sign of an author that knows what they are doing.

** Evil? No.  Cruel?  Maybe a bit bitchy.  Moraly ambiguous?  Very.  They try to do the right thing, but when you're the last of your kind and struggling to redeem and resurrect a species on the verge of extinction, a little bit of collateral damage and theft starts to look like a good idea.

I'd definitely rate this PG-13, but it's nowhere near R. There's nothing in here that made me regret reading this story.

All stories have strengths and weaknesses, but the overall quality is on par with any award winning paperback sci backed by a publisher.  I'm talking about story length, coherent plot, a propper beginning, middle, and end, well defined characters who are actually relevant to the story... in short, it is incredibly obvious that the entire story was planned from beginning to end.

Other than that, there really isn't much to say.  It doesn't feel right to give it 5/5 in all categories, since it's just good as opposed to amazing.  To be clear, by "good" I mean "In the top 5% of everything I have ever read, across all genres.", so don't take any of the following as a serious criticism.

-1 Style for me being unable to remember the visual design of the setting and ships a year after reading this.  -0.5 Character since I can only remember the personalities and plot twists of the main and secondary characters, I've forgotten the tertiary characters.

Story is the strongest point, as I can still remember the entire main plot.  It's a combination of action, subtle philosophy, and semi-foreshadowed plot twists, so it really stands out in my memory.

As I've said above, this story is complete.  For better or worse, there will be no sequelitus infecting this series.  The author has continued to write new stories that I can only assume are of the same or higher quality, so I would DEFINITELY recommend following him.  Too many authors suffer from burnout, hiatitus, amazonetization, litrpg addiction, or one-trick-pony syndrome, so finding a legit author-tier author is a goldmine.

This is an above average sci-fi space opera with a hint of HFY. I highly recommend you read Part 1 and see if it hooks you like this managed to hook me. Quality is quite high.