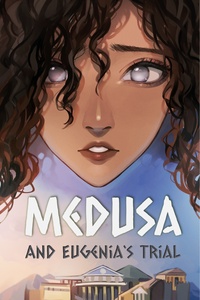 Medusa and the blind woman

The legendary Gorgon, Medusa, spends a solitary life on her island Sarpedon. The only interruptions to her monotonous life are the occasional expeditions of foolish humans that try to slay her for fame and riches.

This story begins on the day that just another of these expeditions brings along an unusual woman. A priestess of Athena that was born blind and is not afraid of the Gorgon. Soon those two are forced into an unexpected coexistence on the small island.

Will those two unlikely life partners learn to get along?

Disclaimer: I released Volume 1 on amazon kindle under the name Bryn D. Estelle, so please do not send me messages that my work was stolen.

The great goddess of wisdom and war, Athena, realizes that her priestess is prisoner to the Gorgon and makes a bet with the monster.

The human expedition returns to slay the Gorgon and Eugenia is caught between the front lines. Typhos reveals his true goal and his machinations corner Medusa.

What choices will the dissimilar duo make? Who will come out victorious?

After Eugenia awakens in the city of rowers, Eretria, she finds herself separated from Medusa who is receiving punishment for leaving her exile.

Still recovering from her injuries and desperate, the priestess sets off on a journey to make a return to Sarpedon. On her way she meets many strange new people as well as some familiar faces. On top of that the messenger of the gods, Hermes, tells her of a trial that awaits her on this uncertain path.

Where will her trial take her?

Love it, I recommend giving it a read

This story is driven by character interaction, as I believe any great story is. The two main characters feel well developed with distinct personalities and charming interactions with each other. The author goes on to expand the world by introducing side characters with their own backstories and motivations that make them feel like fleshed out characters that eventually drag the main characters into a much bigger world and story than the initial set up may suggest. For these reasons I give full points to character and story. As for style and grammar I have noticed nothing that distracts from the story being told, so full marks there as well. I feel that this story is highly underrated at the moment and is one of my favorite stories on RR. I urge anyone reading this to give it a try.

This a heart-warming story driven by the interactions of its two well-developed main characters. It effectively and accurately weaves in many aspects of the relevant Greek mythology, while still telling an original story.

The writing style is easy to follow, there are no major grammar issues, and the world-building has been happening slowly but steadily.

My only concern is that recently chapter releases have become a bit more erratic, but the chapters are worth the wait.

I would strongly recommend this story, since it is well-written and has a lot of potential.

A great sweet story. That I love!

Reviewed at: Chapter 43: Medusa and a reunion

Overall this is a romance story. We have the infamous Gorgon and a blind priestess of Athena. They go through life together, both the good and the bad. The love is there hidden behind half-truth and misdirections, but it is simply sweet.

This is by far one of the best novels on this site and I highly recommend it to everyone who wants a well-written romance novel.

Don’t get fooled by the tags

Reviewed at: Prologue: Medusa and the blind woman

Even though this story has comedy and slice of life tags, it is not just about a human and a monster living together and doing a random stuffs. Later in the story it will be lots of drama and seriousness that even made me tear up several times while reading. It is a beautiful and heart-warming story. The plot is great and you will find it even more enjoyable if you are into Greek mythology like me.

The best story on this site for me so far.

I was really pleasant surprised by the accuracy of the whole story. Some details I never knew about the myth are naturally introduced in the story. I am excited to see where the story is going to.

The Story is Heart-Warming and Generally Great

This is really a special piece that has graced RoyalRoad. As a work of historical fiction, the author breathes life into his or her vision of the Greecian city states' golden age while paying homage to just about everything ancient greek: language, culture, and mythology (religions, cults, and mythos). A reader versed in classical greek literature will also find plenty of draws from those materials, which lends the story a very solid base.

Iconic cities are populated with imaginative characters steeped in the city states' diverse cultures. The main cast in particular recieve real attention to authenticity in their motives and decisionmaking. Readers will discover that good guys can be bad guys (but not too bad), and more interestingly, bad guys can be good guys. Characters also face the classic literary devices. In particular they must struggle in a world where fallible but apocalyptically powerful gods have vested interests in the affairs of mortals and immortals alike despite remaining rather detatched from the toils and sufferings. Of course, there is no lack of conflict between the mortal cast, who really take the stage as the plot transitions from an isolated castaway set to the vibrant city-state backdrops.

Readers will appreciate the comedic elements amidst a serious story. The only negative here is that the humor seems very much the Japanese boke and tsukommi, but perhaps just straight guy wise guy. Either way, it sticks out from the story, despite being properly integrated. This is impossible to avoid, really: ancient greek jokes would be lost in translation or lost on the readers, modern comedy is probably different anyway.

On that note, the style looses points as modern phrases have worked their way into the story, too many to count really. Some of this is unavoidable what with using the english language, but also a shortcoming on the author's part to replace them. No points were removed from style for giving characters accents to explain their educational level or regional dialect/accent despite it being distasteful and putting undesireable focus on the english language's part in the story, in the eyes of this reviewer.

It felt as though this story might have learned something from rational fictions, or perhaps just good writing. Characters behave rationally; no-one is left holding an idiot ball. Furthermore, there is a real submotif of advancing humankind's interests for the sake of progress and betterment, of defying destiny and not relying on an external force (gods). This goes hand in hand with the deconstruction of strawman monsters. Thats right, the work we have been waiting for, where monsters are NOT humans, but neither are they monsters. Certainly not flat, that much is clear. True to greek mythos, it turns out they are mostly just victims of hyperpowerful deities with hyperpowerful egos. Anyone who likes redemption, repentance, and general self improvement should be satisfied. Certainly there are some tragic elements, but all things considered, they belong in a story inspired by ancient greek mythos.

Similarly, what is a hero, in a realistic story rather than a legend? What does it mean to have faith when your faith can be rewarded? When your faith is insignificant and ignored, or when a lack of faith may bring an olympic wrath down upon you? All these dilemas and more are faced by ordinary individuals daily in BugDevil's Medusa and the Blind Woman, where everyone is a hero and no-one is special.

Note: the author does not claim to be perfectly accurate, and indeed there are plenty of mistakes. However, given the role shipping plays, I wish the author had done more research. ¿Why are there wooden crates?

A Historical Monster Turned into a Slice Of lIfe

I never thought I wanted a slice of life about a blind priestess living with Medusa. But reading as they interact and slowly get to know each other has been very fun. If you have any interst in Greek mythology, monster girls (who are truly Monsterous) or a cute slice of life, than this story is worth checking out.

Is this story a total fiction or was there really a eugenia in Greece myths. Also people use the term Lamia for snake women, Was there really such a place? Are these connected?

Reviewed at: Chapter 59: Eugenia and the dream