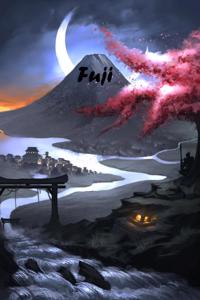 Further down this page contains minor spoilers, avert your eyes if you wish to read without any predisposed knowledge.

With that in mind, let’s go into where we start this story-

The sun goddess Amaterasu has gone missing, plunging the earth into eternal night. Beings of darkness and pain have started emerging from the shadows and have been deemed the title Yokai. The shogunate has formed a committee of samurai and swordsmen gifted with the embers of Amaterasu to slay the beasts of shadow, but their efforts have grown unsuccessful.

Ash covers the land as snow. The embers of a forgotten time have died out. All that’s left is us and the dark.

A Strong Story That Needs Time to Breathe

Fuji is a fascinating new web fiction from writer AdmiralMonkeyman (Or AM as I’ll refer to him from here on in). Set in a world inspired by eastern mythology, Fuji imagines a world where the sun has set for the last time and darkness is all that we have left. Such a concept is rife with possibilities and while they have yet to be fully explored I look forward to continuing on this ride.

From the very first chapter AM does a wonderful job developing our protagonist Kenshi. His past has been difficult and little hints are sprinkled throughout the piece about some of the reasons. I expect these will be paid off in time. Other characters are quickly established and with few words we feel we know them. Hayato’s honor shines through in his characterization and I immediately like the Emperor once we finally meet him. Even characters we meet for much shorter times or whose importance is likely to be limited have distinct and notable personalities. Strong dialogue helps to drive this home as each character has a notable voice.

At times the writer paints a strong picture of what we’re seeing which I appreciate. At other times however his descriptions can get to be a bit much, especially when they’re revolving around things which don’t particularly matter. More of an issue is that despite this he tends to fall into a trap of telling us things instead of showing us things.

The strongest example of this is the relationship between Kenshi and Hayato. We’re repeatedly told that these two have developed a bond after Hayato has to take Kenshi in. We see no real evidence of this however. Their one interaction we see during the period this bond is seemingly being created actually suggests the exact opposite. It features a lack of trust between the two that suggests they have almost no bond. The evidence of his words and the evidence of what we read contradict each other.

This leads us into the biggest flaw of the work which most of my other critique is built upon. Things move too fast. I appreciate a story which has forward momentum. Some of my favorite TV moments in recent years were the season finales of Once Upon A Time Season 1 and The Good Place Season 1. The one thing these share is they hurtle the story forward. Both do things at the end of their first season which lesser shows would have stretched out for years.

There’s a key difference here though. Those were at the end of a season so we had time before that to let things naturally develop. In Fuji it feels like we’ve gone through several “seasons” worth of content in a much shorter amount of time and this begins almost right away. Because we haven’t yet had time to get to know the characters, to let their relationships develop, hurrying forward too often leaves us wondering what’s going on. We also miss the chance to dig into key aspects of our characters and the world. A world without light is an awesome idea, especially during a time when artificial sources of light would have been more limited. There’s a lot of room to explore that and I hope that’s coming.

Despite some reservations about quick pacing I really have enjoyed Fuji. A strong concept, good dialogue and interesting characters are enough to keep me happily reading for now. I do however hope that at some point we slow down and smell the flowers a little bit. These characters and this world have a lot of room to develop. I want to see them given the chance to do so.

A Samurai is never too old for Honor

Reviewed at: The hunt

Fuji follows a middle aged man named Kenshi. This man clearly has had an important role in past history, and it would seem his time is not yet done. As we enter into the story, Kenshi is there to witness a small boy violently transform. Though seemingly a nobody on his way through the market, Kenshi is quickly revealed through his ties to the shogunate, in the wake of this monstrous transformation, to have been a past political player. He is thus not treated very nicely in the court.

We see that the land is sunless and monsters stalk the dark, waging an eternal war against humanity. And now we find out that those monsters are infecting humans? Cue imprisonment and the plot has got itself rolling, pulling Kenshi back into the war. Well that’s that. We have the setup for a great quest!

I’ve been following the story since the start. This means that I have seen Admiral’s notable improvement as a writer (including a strong rewrite of the first five chapters), and I can vouch for his potential. Though the story is not yet done, my review could be summarized just by this: I am genuinely excited to see it through.

Fuji has a solid aesthetic and always paints a pretty picture in my mind’s eye. It’s a snowy, fuedal japan, with all the colorful and cliched beauty. Its characters, with their mannerisms and dialogue being well described, are interesting and entertaining to follow. Sometimes they can be a little hard to track and make sense of, but overall, they are distinct.

The author has been largely consistent but, including both the break for rewrites and others, he does sometimes miss an update. I feel confident the story will be completed regardless, but I would appreciate the same criticism of my own work. Consistency is king, as they say.

Now! Any major flaws? Things can sometimes meander. There may have been one or two unnecessary chapters spent at camp when the plot could have been moving along. Though they were utilized for character building, the plot has, overall, suffered from a small degree of directionlessness, as Kenshi is swept along just to survive. While it has become apparent later on in the story that Kenshi has a mission of personal significance that we can root for, at first he is merely afloat on the wind. But perhaps this is fitting for a first act? All that matters is that he is, you guessed it, going to regain his honor! If you’re anything like me, you enjoy a solid redemption arc.

I give the story a mechanical rating of 3.5, with emphasis on the fact that a 2.5 is what I would consider a solidly written book on a technical level, including prose and whatnot. Anything below is actively unreadable. What I list on my actual review-rating is the amount I would recommend this story, among all others. This is more subjective and based in the credit that I give to its uniqueness and world. 5/5. Keep up the good work.