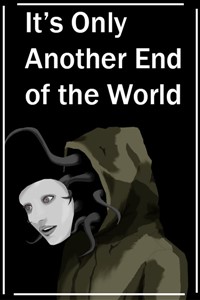 It's Only Another End of the World

Fate conspires to unite Cody, a grieving man who lost all he held dear, and Suzy, an eldritch abomination from beyond the stars. Together they attempt to save humanity from yet another end of the world. They will travel beyond time and space! They will face madness, violence and greasy food! They will laugh, cry and fight for the sake of all mankind.

They will also fail.

This story will update infrequently for the last of its run.

Great for fans of "Welcome to Nightvale"

Chilling, bizarre, and dark, this serial somehow strikes a balance with anachronistic humor. There is nothing else like it that I have seen on this site, or at least nothing like it done this well. We are still in the early parts of the story but already this is one of my favorites. I cannot wait for more!

There is nothing to add more than, it's great.

It goes straight to my re-read when I have time list.

It's good, and amazing, and i actually had planned to write this long and extensive review, but it's two past midnight for me, so i'll pass.

I will complain about one thing tho. I was promised eldritch waifu. But i wasn't delivered eldritch waifu. Yes, yes, i know. "But Suzy!" Yeah, but shes more friend/manipulator for MC. I want Romance. Eldritch romance! With our boy Cody smashing eldritch waifu. And by that i mean Suzy. I can just feel that they could be something.

Other than that, amazing story, hope it never ends.

Not My Style, But Worth A Try

Like the review title says, this story isn't really my style. I don't agree with many of the decisions the main character makes, the direction the plot goes, or many other tiny details, but that's mainly unrelated to the what I should be putting in this review: all of what's below are just the opinions of a rando on the internet O_o.

The story is based on the perspective of a character with powerful social anxiety and other personality flaws.

That should say at all; it reads like a diary of a person who has just recovered from being in an insane asylum. It feels disjointed and awkward in some places, but deeply philosophical in others. Sometimes, the results from this strange thought process might surprise you. Overall, not bad, but it could do with a bit more focus.

Grammar is good. A few mistakes here and there, but usually in spelling, not punctuation, and usually not enough to ruin the flow of the storytelling.

If there's one thing this novel does extremely well, it's illustrate characters. The characters feel visceral, realistic, almost as if you're meeting them as the author writes them in. (most of) The characters are charming, witty, and deeply human in a way that lots of authors on RR miss. Unfortunately, (sorry for saying this for the umpteenth time) this means that I hate the main character and I would love to punch the whiny baby in the face.

There is my review. Whether you liked it or you don't like it, I always say read the first chapter and decide what you think about the writing for yourself.

As psych horror(?) goes it is amazing

And i will never ever continue. Superbly written with a fantastic idea and it creeps me the fudge out. I got to 4-5 and i refuse to go any further. The existential nightmare that is this glorious piece of fiction shall haunt me the rest of my life. Bravo, and curse you

One way trip to insanity

This is one of few stories with writing so good that I sinked into it and even pulled a night just to read more. Mix of eldrich comedy and tragedy is something amazing, and author seems to be on pair with pros in writing or at least near that level. The ending is also perfection

Grammar, structure, and pacing is great. Worth a read

An excellent story with a rather abrupt ending

It's Only Another End of the World is an excellent story.  The dynamic between Suzy and Cody provides an excellent opportunity to explore Cody's motivations.  What makes Cody a fascinating character is that his decisions feel very impulsive.  It was a lot of fun watching him traverse the world.  Even his goodbyes during the first act were highly entertaining, in large part because they felt so unfilfilling.  His non-reaction to saving his mother was frustrating but also perfect.

I found Act 4.5 especially powerful  Not only did it showcase Cody's impulsiveness, but it was beautiful how oblivious Cody was to

the parallels between his perspective in Act 1 as compared to his clone's perspective.  I realized immediately that Suzy was watching the entire time, but seeing Cody's reaction to this revelation was great.

However, the conclusion of Act 4 felt forced.  Prior to 4.6, I felt like Cody was hyper-focused on his goals.

I acknowledge that 4.6 helped lead towards the revelation that Cody was suicidal.  However, prior to that Cody had primarily focused on survival of the world.  While this survival often felt a bit misguided or forced (which is justified in Act 7 where we learn that survival is his secondary motivation), his impulsiveness in pursuit of that goal is a big part of what made him an interesting character.  Being willing to die was a strong but out-of-place hint that he was suicidal.  However, I think it would have been less jarring if he was resigned to die.

In some sense, a big part of my enjoyment of this story came from watching Cody consistently make futile decisions.  It quickly became clear to both the audience and to Cody that Suzy was helping Cody more for fun than because she cared about the world.

All that being said, I found myself far less satisfied with the final act.

While it was a very jarring change, I didn't mind the interaction with Nyarlathotep.  It was obvious even to Cody that Suzy viewed him primarily for entertainment.  If nothing else, her outbursts when he was threatened made it clear she cared about him more like a piece of property than as a person.  While it was foolish to think Nyarlathotep was any better, such foolishness was not out-of-character for Cody.

However, the revelation that he was suicidal didn't really draw my interest.  It was strongly hinted at throughout the story, but when it was revealed I just didn't care.  He struggled far more with world-saving than with suicide, so that's the part of Cody which I cared about.  Perhaps an Act 0 would have been helpful in engaging me wit his suicide.

Where things got even worse was when Cody started tying up loose ends.  It felt awkward when he went from taking it for granted that Suzy would help him to bargaining for her assistance.  Further, much of the fascination of the story was in how he reacted to the futility of his goals.  The switch to acceptance was rather boring.  What success he had in the conclusion did not fit the tone of the rest of the story.

While I admit that such a downer would have frustrated the audience, I think complete falure would have been more narratively satisfying if his request for further assistance from Suzy had been met with her replying that she any further suggestions she offered would be even worse, in the context of his original wish.  It would not have been out of place to then end with a callback to her original warning that people who accepted her wishes were often unsatisfied.

Despite my criticism of Act 7, I enjoyed this story a lot.  Thank you for sharing your work.

The story is over, and feel like crying. I feel like crying because this story is too good and I get emotional when it's late at night. If you're still reading this review than I will tell you this; Read The Story! The author has written an unpredictable tale of hardship, wonder, and growth. Within its enchanting (web) pages, Cody battles the conflicting feelings of nihilism vs hope, desperation vs will, and finality vs change. As most who clicked that spoiler button know, the end is nigh, so we might as well watch as it unfolds in a tale that shall forever go forgotten. "It's Only Another End Of The World," is just as the title suggests, so make of it what you will and let that understanding change as you read it.

Much like Lovecraft's stories, the MC is adrift in a world where powers he cannot fathom take root.

Truth be told, I did not expect that. I came with the expectation of reading yet another OP MC on the path to divinity, with little depth and a very emo character.

Needless to say, I am so far (as of 220~ pages) very pleasantly surprised.

It's a comedy, it's a tragedy, it's a sea of words mostly outside of the MC's control.

Structure-wise it's organized in an easy way to read.

The grammar is good,sand there are no glaring mistakes. Well, English is not my maiden tongue, so I might have missed something.

Why are you still reading my review? Put on some music and dive in!