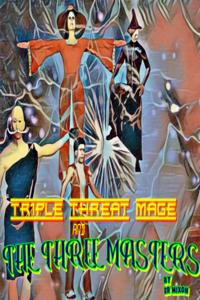 Draken Crowe is a pickpocket working the mean streets of Gold Seal City. He runs a small but loyal crew working under his young but ambitious uncle. It's a hard but uncomplicated life until one night he unlocks a terrible power. Weeks later the memory still haunts him when he chases down a bully, following him  into the line for the annual open magician apprenticeship trials.   Yet not even the master mages are prepared to deal with the power he holds.  Unique in all of history he is a triple threat mage and has the potential to master all three mystic arts. The only problem , Draken still thinks of himself as a thief and he's looking to use his new magic to pull off the biggest score of his life.

It did not remind me of Locke Lamora, it reminds me thieves guilds in Neverwinter or something like that, a classic videogame from the dawn of this century.

the narrative is clear, though the use of present tense narration is a risky business, and this book walks the edge between it being grating and it working as intended, I.e. to heighten the suspense. At least every few paragraphs it made me think, ‘it would have been smoother in the Past tense’, and I would have preferred it not go past prologue once the cat is out of the bag with Draken’s hidden talent. But, what can you do.

I liked the use of dialogue in this book. It flows well, conveys the conflict, is terse in the right places. The use of dialect speech does not obscure the meaning of what is said, and does not trip the eyes.

Draken emerges immediately as the main character of the book, and stays firmly at its core, leaving no doubts that it is his journey. His character is not particularly pleasant, with lots of rough edges. He prefers his profession as a thief to being a mage, but you get te feeling early one that he will be coerced into using his powers. It is a time-honoured plot, very few protagonists seem to actively work towards being something special.

The book makes it intersteing to guess if Draken falls into the tough with a golden heart archetype.

The side characters are sketched in, which helps the pacing. the book is not overflowing with them, so it is possible to keep track and stay with the narrative. On the downside, it’s hard to like anyone but the MC, so if you did not buy into the MC, there is nobody to keep your affections anchored to.

I did not catch backdrops that had significance to the narration, I felt that the book relies on me to picture the crooked alleys, dives and warrens of the maybe late medieval cities in Faerun’s bend. I did not get a feel of a particular century or a country that the book references — one of the big departures from, say, LAmora’s escapades.

The way the book is formatted and presented is problematic for me, between the numerous pictures in different styles all over the text — it is hard to say if the author illustrated himself or borrowed the clip art. This many illustrations is always suspect for not enough descriptions to keep the imagery coming. The continuous asks for geld, twice per chapter, do not help the enjoyment either & ruin immersion, as the author now competes for attention with his MC.

in summary, if you were born in the Present Tense is In Era, and looking for a young rogue’s adventures with a magic twist, in an classic videogame setting, check this book out.

Thrill From The Get Go!

I will say that this was a rather fun adventure from the beginning. The characters were moderately believable and for the most part pretty well defined and individual. The Main Character is very well written and a highlight of the story.

I will say this, the cover threw me off to the story. Seeing that, it moreso was slightly off putting but still the blurb kept me interested and I am overall glad I read this!

He does some fun ideas and twists with the magic which keeps everything fun and enjoyable, but some things you need to be careful with is that magic cannot be a fix all. Like in Sci-Fi how time travel fixes all haha.

Overall though this is a well thought out and planned book. The author does an amazing job at the world building and I was ultimately impressed. Strong potiential and I am excited to see where this will go.

Hmm reminds me of the gentlemen bastards series

So as the title says this reminds me of the lies of Locke Lemora(gentleman bastards series) but with more magic.  this is a great thing as that is one of my favorite series. The only question I have is where are all the reviews? You have a fun work that while not the most high fantasy(this is more of a modern fantasy novel) is still is great and very well written.

the Mc has some believable if naive aspersions and it makes sense that he thinks this way given his previous way of life.

The only thing I think drags this down(that is a personal like) is the fact that this novel has a soft magic system.

in literature there are two different types of magic systems, a soft one and a hard one. An example of this would be the lord of the rings which has both soft and hard. Soft magic is like Gandalf’s magic, where the rules are never explained and most of the time you don’t even know if it really is magic(like when he summons the eagles or when he saves the day at helms deep) now this adds a sense of wonder to the book but can also get tiresome as it allows all problems(or most) to be solved  through the use of magic as some new spell is found to save the day or whatever.

Hard magic on the other hand is like the one ring, it has rules, it always does the same thing(Frodo puts it on and turns invisible, but also gets spotted by the eye of Sauron) this allows the author to use it in unique and clever ways but more importantly allows the magic to have flaws. Flaws are always more interesting than the magic itself, and I believe no action should not have some sort of backlash. Now I know this is just my taste but I think you should set down some ground rules and make this a hard magic system it would make this novel a 5 out of 5 right away even for me. Brandon Sanderson has some excellent lecture on the matter just look it up on YouTube (he is after all a prolific writer and the author of the storm light archives so he would know)

i very much enjoyed this novel and will be watching it for more updates.