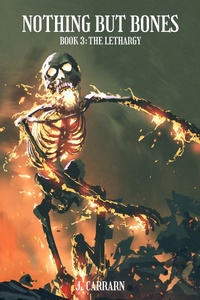 Remove
Original HIATUS Action Adventure Fantasy Sci-fi GameLit LitRPG Magic Non-Human lead Post Apocalyptic
Warning This fiction contains:
I am super excited to announce that book one has been released on Kindle. Due to this, all but the first few chapters had to be removed from the public domain. Book two will we released here while I write it and stay here until I decide to put it on Kindle too.
https://www.royalroad.com/amazon/B088C4YS7W

After the exodus of all life, our galaxy is left empty and desolate. But in the absence of life, undead energy surges. Beings that should only be summoned are now rising, gifted undead life by the abundance of energy. On one empty world, a skeleton comes into being. With no memories or even a personality, he is cast into a young, dangerous world. He will need to grow fast if he is to keep his new existence.

Let me start by saying I love skeletons.

Story This is about a lonely piece of bones that wants to find the meaning to his existence. You can feel the potential after chapter 5. Nothing much here because it's just starting.

The style was difficult at first because of how flowery it's. But once you go pass the first it becomes easier to read.

Os Solus is a skeleton with no absolutely zero memory, at least in the beginning. But he/it slowly understands the empty earth as he travels. He didn't make any major decision yet or associates with on deep level with others so it's difficult to say how he will develop.

This is good. There are a few sentences that require double read and some that are unusually longer other than that nothing .

Thanks for story. As I said, I love bones.

The Journey of a pile of bones.

This story follows the skeleton Os Solus and his journey to finding a meaning in his existence, cant exactly say much about him, since he is basically a simple skeleton at first, but slowly becomes more than that after an encounter. The interactions between the MC and the first characters he meets is a bit weird at first, but considering he is a 'newish' skeleton compared to them, its fine. The story also showcases the growth of the MC in various ways, most notable being his intelligence, this does mean his personality changes over the course of the story.

The concept chosen for the story is quite different, and interesting. How the author has built a story without any 'life' and still made it have some sort of weird ecosystem, is just good. Theres also the system of evolution, while it aint that special, it is still done well. Through i still have questions about some stuff since some of the weirder stuff has not been explained yet.

Would say it has a weird start with the first chapters, through it becomes better a couple chapters in, so that is not a big problem. Through the large paragraphs in some chapters can get annoying.

There are the occasional mistakes, but in a normal read, they barely hinder the reading at all. So overall the grammar is of a good quality. There are through the times where the wrong words are used for something, which can be annoying, through those are rare, and are getting corrected when detected.

I barely have any problems with the writing style of the author, its overall easy to read, through its quite wordy at times.

Overall its a good story, from the viewpoint of a skeleton starting at the weakest, and slowly growing stronger. Whats currently released is only the first book so theres a lot more potential in this story. Through i find the story could use some more editing, so it is improved on even more, but what we have currently is already pretty good.

The 4-5 first chapter were a bit  difficult to read (i skip the first chapter), but all those which  came after were great.

The MC and sub character are well wrote with a good evolution.

I wasn't able to immerse myself into the story even though the plot is fairly good. But I will continue to read because of the characters and theirs evolutions which are really interesting 😊

wow that was a great read!