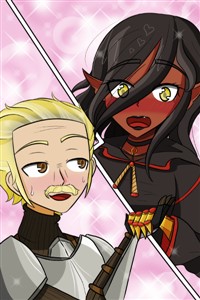 Julius Goldforge knows how the world works. He knows his role. Really, it's destiny by this point.

The mentor dies, the hero gains motivation, and the demon lord falls to their blade.

Written by Redknight3996 and Indismile, The Demon Lord's Lover is a fantasy comedy/romance featuring a jaded, middle-aged adventurer who's damn sure he's going to die on this new journey with his students and the ambitious Empress of the Dark Lands, whose drive to conquer the entire world winds up putting both him and her on a bizarre course of attraction and impulsive decision making.

Includes (but is not limited to): action, adventure, big fights, elemental-themed temples, demons, angels, fumbling romance, competence, incompetence, nudist druids, the crimes of the past influencing the current age in myriad ways, interpersonal issues, fatalism, and being a decent uncle to one's adoptive family.

Quirky, fun, and full of clichés

At the time of writing this story barely has 100 pages, so no advanced review for you just yet.

Nevertheless, let it be known that I like this story. I don't usually read (or enjoy) these "hero goes to fight demon lord", or the "super OP mentor traveling with students" things, but in a really weird way, this one managed to worm its way into my heart.

First of all, it's well written; no matter if you like the premise or not, you can't deny that. The grammar and spelling are spot on, descriptions are well done (no infodumps in sight), and the pacing feels just right. Fights get the attention they deserve but aren't too dominant, and enough room is left for proper character building.

Ah yes, the characters. I hated them, at the beginning. So many clichés. But once you get over that bit of bias, they turn out to be irreplaceable additions to the story and its vibe -- which is to say they are hilarious. They don't act like human beings but like the ridiculously exaggerated sketches of different personalities that they are.

To conclude, a very much enjoyable ride alongside characters and in a world which are both not to be taken very seriously, in a good way.

THIS IS PLEASING TO ME!

Hello ladies and gentlemen, come and relax as I tell you the greatness of this most scrumptious tale.

In this story, a saga of very poor life decisions, you will see many clichés being thrown over their heads and mercilessly drowned in a sea of loving parody. To the isekai genre, to the mentor mortem syndrome, to the nymphomaniac bard that probably tried to fuck all the dragons you fought, we have it all here.

But the main catch of the story is not this, oh no, this is merely the strawberry icing on the chocolate cake of victory. The style is good and relatively fast-paced and the grammar is near perfect but the real strongarm of The Demon Lord's Lover are the characters and the story. No 2-dimensional cutouts so thin they could fit between two connected atoms, here even the extras are interesting in their own way.

Julius Goldforge is by far one of my favorite characters in any book I've read. The man's a fuckin national treasure and his characterization is 11/10 would save the world again. His motives and personality are seamlessly shown throughout the story, and he is the living incarnation of "I'm done with this shit" and if it wasn't for the Demon Lord I would be the one trying to bang him.

Indeed, for his main love interest (I say main due to some developments that happen later in the story, but even then it's kinda pushing it until more happens) is the best Overlord I've seen in a while, outmatched only by Momonga-sama himself. She's not evil for the sake of it, not even really evil and she's quite pleasant as a person and I would most definitely invite her to grab a beer with me. Her interactions with Julius are extremely CUTE. ABSOLUTELY SO.

All in all, I want those two to make about a thousand babies and you will too.

Regarding the other characters, particularly the heroes, they're all charming in their own ways and their interactions are very funny and lovable, though they might need some more development and focus in the near future if they hope to stand against the ABSOLUTE CHARISMA UNIT that is Julius, the old heroes, and the Overlord.

The story is great. It's obviously inspired by most fantasy cliches, particularly Japanese ones, but it's not done in an unpleasant or boring way and these concepts are instead used rather well. All settings and story arcs flow well and never feel like they've outstayed their welcome. It always feels like something's happening, though there are of course some breather chapters.

All in all, as official local shitposter of the story, I must declare that it is fucking great and a very fun read overall, with more depth than you'd imagine from this kind of setting, particularly in the lore and characters. ALSO IT'S CUTE DAMMIT!

If you keep the fiction the way it is paced I will be your good follower. It is a really light-hearted comedy with a sprinkle of romance. I like it :)

Also the art is rather cute.

Doesn't play to its strengths

Splits focus between combat and simple politics, not giving either enough time to develop. The main romance is too simple for how mature the two leads are supposed to be. Kinda funny how almost all relationships are gay though. Lots of lore, and frustratingly the backstories provided by the ending bonus chapters hint at the possibility of more (e.g. character development, politics, etc.). The whole "demon lord" aspect was conveyed much better in the ending bonus chapters than the main story.

Reviewed at: Epilogue - The Epilogue

Even if it's accurate.

The MC is sarcastic as all hell, a good measure of slightly insane, and a 100% badass.

The story is extremely well written and developed. While not being a full on comedy, it makes you smile.

Read it, you owe it to yourself

This is the BEST story i've read on Royalroad in a long time, and the only one ive given 5 stars. Hands down my favorite story on this website.

The MC is sarcastic and tired of everyone's shit and the story is a not stop excercise in dry humor and stifling your grin and laughter. Julius is realistic for an outlandish MC and a fresh take on the "mentor always dies" trope. rather than following the hero in the aftermath of the mentor's death instead the mentor lives and we follow him as he clumsily guides the party on their quest to defeat the demon lord (MC's crush).

this story deserves the top spot in trending and I hope to see it there soon!

Love the story so far.

I am 8 chapters in (about 93 pages of an average novel/book) and caught up with the current released chapters at the time of this review.

Its current rating of about 4.7+ stars overall is a testament to how great the story is so far. It has excellent world building, near perfect grammar, and relatable characters/human interactions that you would expect from seasoned writers. The authors also know how to flesh out characters and make them unique, though I wish some of the young heros can be fleshed out a bit more and maybe have some backstory on them. That is probably my only concern, though it is too early to determine how important to the overall plot the young heros will be compared to the main character and what will most likely be an obvious romance, and if their backstories will be necessary at all. My opinion is though that the budding heros feel a bit dry in terms of characters and incomplete, since we know so little about them other than that they have their own quirks and personalities. I'm not sure how important this is at this time as I am not an author, so again, this is my opinion, and does not take away too much from the quality of this excellent story.

Overall, read this story! Thank you authors for posting on RR. I eagerly await for the continuation of your story!

Nothing bad about it that I can remember (maybe you guys didn't use Oxford commas? I'm not sure, I can't remember) and a whole lot of good.

A funny and great story

It is a funny story. It is well written. I like how the story plays with the cliches of hero agains demon world. The world is well build. The story have a lots of potential for the futur.

I wish Alviona could enjoy a life like this! Of all the world she could have arrived to T_T.

This fiction is light-hearted and packed with comedy!

Style is good, grammar is descent.  Story and plot is straightforward unlike my fiction. I love this! I truly endorse this.

I need the distraction desperately and this pops up. I really like it :)