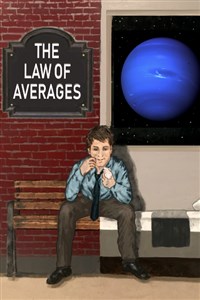 The Law of Averages

What young boy doesn't crave adventure? What young man doesn't wish to be a superhero?

But time marches on, and life grows dull with responsibility. Is it any wonder that old dreams are forgotten?

Welcome to The Law of Averages: In which a man is dragged solidly out of his comfort zone. Be careful what you wish for, you never know when it will come true.

This story follows Daniel Newman as he adjusts to a strange new world. One where superpowers are for sale, where heroics are frowned upon, and where life is constantly defying Daniel's expectations. Dan always thought that he was destined to be normal, but one world's normal is another world's special.

The Law of Averages now has a Patreon page!

Failure to do anything with it

I had such hopes for this story. There is so many good ideas and the characters are quite good with interesting relationship. When I started the story I was hyped but just nothing happened.

I stop at Book 2, I'm just bored reading this. Most of the chapters are useless and could be easily replaced with one or two phrases. And the few times something actually happen, the consequences vanishes after 5 chapters or just take ages to appear (with random training, side quest, etc.. in the middle).

This story is really good but it really need an overall plot to make the character move, and the plot need to move quicker than something interesing every  20 chapters.

Apart from that the story is good on every point, it just need a plot.

Decent but not for me

Great writing but a little boring. Gets better as it goes a long. Hard for me to relate to the MC and not my kind of story so much. I imagine some people will think it's great and some people will prefer other things.

A new take on the classical superhero trope

Dan is an average joe who got transmigrated in a superhero universe by a somewhat facetious deus ex machina and lucks out with an incredibly powerful teleportation power and a grumpy mad scientist as a sort of mentor.

But humanity being humanity, it only took a few years of mayhem and collateral damage for superheroes to be viewed as misguided and destructive vigilantes who are harshly punished or even directly put down. Even mere holders of strong powers, viewed with suspicion and distrust, are strictly monitored. So, our hero newfound powers might become a boon but are also a liability he has to hide.

Too bad a very nosy and even noisier cop has decided to quite forcefully make him join the Austin Police department. What kind of life can he makes for himself in this new world?

A fun and globally light-hearted story with hints of darkness beneath supported by a strong and colorful cast of side characters.

Detailed review (as of chapter 77)

The side characters are the strength of this story. Dan is somewhat the weak link but that’s part of his self-improvement storyline. It would be better to not overplay that and annoy the readers with it. It's good he's finally improving his powers and using his head, but unless it's plot relevant, the metaphysics of what he thinks he understand about his power when powers are belief based should be kept at a minimum. It can also be problematic to make him too powerful too soon.

The style is good but not great, no eye-catching grammar mistakes.

I’m sad to say that as of chapter 77 the story seems to be quickly getting nowhere. Most readers would prefer less chapters if it means a better story. Maybe it’s time to take a break and really think about the global plot and direction of the story. At minima you need a guideline of what you want to write in your current arc and how you might go on from there to the rest of the story.

The dark route hinted by the spiked collars seems to have been put too soon unless he plans to turn full vigilante. The trainer blackmail is interesting, especially to maintain his paranoia but it's obviously completely stuck. One question you have to ask yourself is if he will become a cop or not. If yes when and why he will change his mind about it and if not, how he could act against villains and potentially interact with cops. Especially if you plan to use his first disaster relief job as a turning point.

I don’t know, it’s not my story, but the author at least needs to know where his story is going. That doesn’t mean being constrained by it but the earlier you start thinking about new plots or modifications, the easier it is to incorporate them into the story.

The story has potential, don't bury it by trying to push too fast.

This isn't the average isekai where the average protagonist lands in a new environment, gets exploitable powers and starts using them to smite everyone that opposes their interests and -other-worldview.

This story strives to be more, and i love it for it.

This is the slice-of-life story of Normal Dan, average man, unimpressive in all aspects, that suddenly gets some impressive circumstances and struggles to reorient his own mindset, in a subtly-alien land.

This isn't yet another one-step-op, master-of-magic, imma-change-the-world-because-i-know-better wish fulfillment story, like many others on this site. And you sholdn't come into this expecting that.

This work's characters have a layer of realism on them, especially the protagonist, as he truly feels like a person used to be mediocre and trying to get better, but needing to put in a conscious effort to break out of habits. In a world that expects him to want to remain meek, of all places.

It reminds me of the Tales of Fred, the Vampire Accountant, but serial and just done better. On all accounts.

Reviewed at: My new story is out!

This story isn't something that you can immediately get into. Putting this out right now before any criticisms are coming though. This story, is great. Sure, it's not really about superpowers, but it's nice. This is basically a story about how a guy who just complied with the status quo, deals with sudden, unchangable events and all the while, tries to fix himself to be a better man. This isn't really going to be actions or anything, it's going to be more like a slow burn. At the end though, you'll be glad you were along for the ride. Usually Hiatus stories tend to not have good endings, or any type of ending at all, but thankfully the author actually put a place where the story could reasonably end before he assigned the hiatus state. So that's another good thing going for him. Anyway, that's all I've got to say. Hope you all enjoy. :)

One of my favorite.

Super interesting world. i like how the author shows the consequences of super powers. be that political, social or cultural.

I also like how the mc perceives and has the idea about the powers -him being from a world without powers- and how his views matures and change during the story. How in truth this world is in many ways extremely different and at the same time similiar to his home world.

In my opinion the romantic part is truly good.

by the way, my personal prefered characters are Dr. Viktor, Anastasia, Abby and obviously Officer Gregoir.

Solid Writing Worth a read

The author proves themselves to be one of the better writers on royal road.  The dialog and scene description is on point.  The plot/tone of the novel is a little all over the place, but that is easily forgiven, in light of the things which are done well.  It is a fun, mostly light-hearted rambling slice of life adventure in a semi dystopian sci fi parallel world with super powers.  Easily 5/5 for RoyalRoad.  The author clearly has the chops to go beyond amateur fiction.

A fresh take on supers

I can't believe it took me this long to review this one. It's awesome.

I don't think I've caught (m)any gramatical errors. Those that have been spotted are fixed quickly. The world feels realistic. It's a very realistic take on how governments and corporations would handle super powers and vigilantes. The story stays lighthearted. Some characters are stereotypical at a glance, but they gain depth as the main character gets to know them.

Recently, a chapter was rewritten because the original had the characters acting quite out of character. A willingnes to take constructive criticism is something many authors here have. Major props for that. The author takes great care to make sure the characters interact with the world in a manner consistent with who we know them to be. When they don't, it's because the author is revealing a new facet that adds to the story.

Don't worry, it's not all slice of life.

Wait. this is an isekai?

I never actually realized that fact. But... I guess it makes sense when you think about it. He does get somewhat kidnapped into another world, where he gains both power and wealth, ultimately resulting in him meeting a lo- Holy heck. This really does fulfil all the tropes.

Anyways... This is quite a grand story. It's also a fun one, with the MC having more than just a good ability. Makes it possible for so much growth, to the point where I'm wondering if he can become truly OP with time. Only one way to really tell, I suppose.

Its all about growth

I really enjoy this novel. The MC is not as bad as what others think of him. MC is a normal person and tries at his own capacity to be better than who he was. I always enjoy it when I see growth in  characters when compared to other OP MC  that seems to know everything and makes no mistakes. I also like that the chapter updates is consistent and not rushed with plenty of errors.