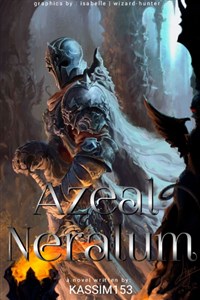 Remove Ads
Next Chapter
A note from kazi223

Discord Channel! Check it out!

A Blighted World and Crushing Hearts by The Juggernaut - Great Reads!

I woke up today. It felt like I had been asleep, yet that can't be right. You dream whenever you sleep. Here there were no dreams, no ill-conceived fantasies or projections of imagination. The universe in its entirety was still, completely black and unmoving. There was nothing.

It's impossible to notice something so apparent until it's gone. You don't notice that lack of mind and feeling. The lack of everything that made you what you are. It's a sudden realization that strikes at your core. You realize that you didn't exist; there was no I- the concept of ‘self’- and complete and utter lack of sense.

You close your eyes once, then open them again, feeling. Noticing what had been hidden from you in plain sight. We are told that we don't appreciate health or family until they are gone, yet it is the same with your sense of self. You don't understand how blessed you are to merely exist until you don't.

‘Where did I go, and how did I end up here?’ I had asked myself then, baffled at what had happened. But, as quickly as lightning strikes, it-- the realization--struck me, dawning upon my broken soul.

‘Oh God, I… I died! I can’t die!’ Facing the worst of outcomes, my soul had fallen into denial. Unable to comprehend the situation, entirely. But, slowly and assuredly, the denial crept away. Flashes of fragmented memories struck my mind. Things that happened long ago. In… In my lifetime. It showed me who I was and those close to me, though their faces were all blurred, their names forgotten.

‘Mother? Who will take care of my mother?! Pay for her recovery! And what of my son?! What of his future?! They can’t live with my sister and that abusive jerk she calls her husband!’


Then, I had only one wish over all. I wished that this was all a dream. Hoping it was but a figment of my overactive imagination. A lucid dream that I had full control of. But I did not know how wrong I was.

A sudden spike of serenity struck me unexpectedly. My impressionable soul was unable to withstand its influence.

"Calm down, tranquility, peace, serenity," a soft and motherly voice called from within the void. So far away, yet so close. Then again, what was distance when there was no sight? I, feeling the strangeness creep into my soul, could not stop the string of words that seemed to escape my mouth, as though they wished to be free of a cold prison.

“Who is there? What is going on? Please explain! Help me get out of the dark!” Putting all my hope in an unknown entity might not have been the wisest move, but it was the only thing that tied me to reality. To the few memories that were not shattered and were understandable.

“Child, you will have your answers in time, but until then be calm for me,” she said in an aged voice, millennia beyond my greatest comprehension. Oh, it was definitely a She- mature and calming in ways no being had the right to be. Something no person could resist, no matter how trained they may be.

Having no other recourse, I affirmed her request with a hesitant “O...Okay.” For a while, time seemed to still, she wholly silent and I the same. After a time, she deemed me worthy of her alluring voice once again. Having been easy to mold, I felt gratification I never expected when she spoke.

"You died a tragic death. Your body and soul crushed under the strain of a cosmic accident. The last vestiges of your existence were left to wander the Void aimlessly for eternity. Lost and hopeless had I not noticed your delicate glow. Your kindness was your lifeline, Child."

Her words caused me more confusion as a million questions appeared in my mind. Trying my best, I vocalized the few I thought most important. "Void? Eternity? Soul? What of heaven and hell?" These were questions I felt myself demand rather than ask. They were essential to who I am, or at least who I had been.

I feared her answer. Was everything I had believed in those fragments of memories all lies? Yet, her response to my question caused me more questions. "My existence is not allowed to speak of such things. Everyone has rules they must follow. But I can tell you that the manner of your death caused your soul to be trapped. Making it impossible to move on."

What was she to have such rules? What did she know that I could not learn? How did she know what I knew not of myself? Unable to fathom the meaning of her words, I choose to leave my concerns for a later time and bring up what was most important.

“How did I die?” I questioned, hoping no rules bound her from this answer.

She replied much quicker than before, startling me. “What do you remember?” She almost sounded eager.

As I thought of what happened to me, a spike of pain started to grow, encapsulating my entire existence in its grasp. Thrumming images long past began to pass my mind's eye. Broken memories never meant to be seen again appeared, though without order. One second I stood there smiling at a blurry figure almost half my height, and the next I lay there all alone.

Steadily, enough came together to get a picture of what had happened. I loved something or someone. As we enjoyed our time, evil and blurry things appeared from nowhere and attacked us. I told the one I loved to run, to escape a most horrible fate, while I was determined to stay behind and protect what I had loved. I did enough, accomplishing my final goal.

The last of my memories was the clearest of them all. I laid down in a puddle of blood as I looked to the sky. Unable to move at all from the lack of blood. Around me were massive buildings that blocked the view from the outside world. In those moments, one thought came to me. Of how I failed to survive and provide for my family.

Let me know what you think on the comment section