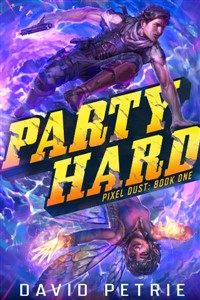 The average person spends a third of their life sleeping, or at least, they did before the online game Carpe Noctem hit the market. Now, instead of wasting time in bed dreaming about showing up late to class in their underwear, players step into a breathtaking world of fantasy and adventure. For most users, it is a dream come true. For players like MaxDamage24 and his sidekick Kirabell, it will become something else.

When one of the Noctem’s creators is fired over “creative differences,” he sets into motion a plan to send the system crashing down. To stop it, Max and Kira will have to gather their friends and embark on a quest that will push them to their limits. Together they’ll face creepy dungeons, impossible bosses and their own nightmares, all while doing their best to stay alive. The only question is, will they be the same afterward?

One thing’s for sure - if they want to survive, they’re gonna have to Party Hard.

PARTY HARD is available now on Amazon, BUY A COPY OR LEAVE A REVIEW

NOTES: PARTY HARD is a fast-paced GameLIT story with light LitRPG elements, which means that, while character stats matter, the fiction focuses more on the story, characters and actual gameplay than it does on leveling up.

Keep writing! For your health!!

by thriceborn Monday, October 8, 2018 7:32:07 PM
So just blew through up to chapter 41 and I'm kinda pissed because I've enjoyed the ride and got stuck at a good part. But besides that? Love the characters and how the story has progressed, kind of worried it might be over soon already, and kind of hating you because now I have a new obsession. Only bad point I could find was a couple grammatical errors, dropped words and the like, and that only in maybe every three chapters. But you just need an editor/proofreader and you're good. Seriously though, thanks for giving me writers envy (if that is not a thing, it is now). Keep it up! Edit:.....man, if you don't make a sequel...you ever read Misery? A little number by Stephen King? Yeah. That's gonna happen. So...make with the writing!
Report

BAM IN Ya Face

This story is GREAT. It makes want the technology for it here today. The story grabs you and will not release you.

The characters are great and believable. I get the gamer lingo and all the "That's what she said" jokes. Action, Puzzles, Intrigue all rolled up into something that smacks you in the face.

No. I don’t play video games.

This is my first foray into a genre that I still have trouble correctly naming. LitRPG?

MMO. MMORPG. I don’t know what these mean. Gaming. Not my wheelhouse. The video game world has escaped me. Give me a comic, a graphic novel, or a book and I’m good to go. Movies? Definitely. Genre aside, I’ll read or watch anything. (I read my wife’s weather and climate text book for fun.) If it’s good, it’s good.

This one is good. Party Hard brings it. Solid storytelling with a great cast of characters. It’s fun. It’s funny. It’s loaded with action and heart and drama.

Maybe this will be my bridge to gaming. No. Probably not. But I have found a new genre of fiction to explore, and I wait with high anticipation to read the further adventures of Max, Kira and friends.

Give it a read. You’ll be glad you did.

Finally a MMO story that actually has MMO spirit!

I enjoy LitRPGs because I enjoy gaming. It’s a world I’m familiar with and find more fun than a generic fantasy. One major problem that I do find with a lot books in the genre is that they write books about playing MMOs and yet the game world isn’t played like an actual MMO. Lot of them dwell on solo play (similar to Skyrim) and single character growth; and from my experience with MMOs, you play with other people. Every member of a team has their strengths and weaknesses and the author not only captures that well but it lends to very well-written, cinematic fight scenes. Another interesting point is that the author makes you really feel the connection between team members. This book says a lot about team dialogue and dynamic which in turns adds a lot individual personalities to the characters as well. In MMOs you play with friends or make new ones and this book captures the “party” aspect really well. They definitely chose their title well.

The writing flows well. The action scenes are the highlight of this piece - they are crisp, quick, and most of all entertaining.