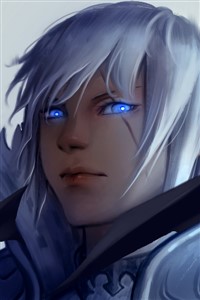 Author lost his mind and found god that wants from him unconditional love and devotion. Pack it up boys and remeber: "last person turns off the light".

I find that the uniqueness of the story and characters are both very enjoyable and a good chance of pace from what is usually found on RoyalRoad. I look forward to reading more.

I cannot in good faith give this work higher than 1 star after the author has seemingly dropped it. While well written with an enjoyable plot it is not worth your time to read to the current cliffhanger; with what appears is as of today's update the end of the story.

I originally found this story on FictionPress, where I read it up to the current release which matches up to the current on RRL as of today  (18th July).  Overall I rate it so highly because it is INSPIRED. The magic system is reminisicent of a few others but has a charm all of it's own as well as a large amount of intresting interactions.

Grammar, I didn't notice any startling mistakes. The most I could point out would be the occasional wrong tense or missed comma. As a whole it does not affect the story and reads well.

Style. The story is told in a manner that gives detail where detail is needed and no more than that. It isn't flowery bullshit, It gets straight to the gritty and I love that about it.

I love this story. I hope that it continues to be written to as high of a standard as it currently it, if that is the case I would have no issue buying it on amazon or elsewhere once it's ready for release.

Everything I want in a story

Update 8/20/18:  The author has dropped the story and has indicated they will not be writing futher here or anywhere else. The story was very enjoyable, but please do not start, since there will most likely not be a conclusion to this story.

Exceedingly well thought out, the story is a masterpiece. Few stories on the site make me as giddy to keep reading as this one does. Although the tag states fantasy and magic, this story honestly reminds me more of a classic superhero story, where each person's abilites have slight quirks to them. The term heros and villains are left out, and in replace of those we have the Mafia families and the Shepherds. Bt everything isn't always black and white.

Like Toph from Avatar the Last Airbender, our protagonist turns a disability into an overwhelming advantage. The magic system is very well done, and every character feels alive and fleshed out. The quality of writing is spectacular, and it would not surprise me if this became published.

I enjoy it when weak ability users overcome their obstacles by being tactical, similar to Taylor's in wildbow's Worm, who can only control insects. How does someone compete against superman-level powers with such a weak ability? By thinking outside the box.

Had the potential to be one of the best!

This webnovel was utterly unique. I hope that the author one day picks this back up and continues writing. The only novel that compares on this site is "Mother of Learning". Crazy to see it dropped.

do i even need more prof that it suks than making such a nice story die in 2018??? at least they are done burning ppl lets hope they leave stories/childrens alone :P

This is by far the best review I've given on this site. The chapters are long, I've seen stories with over 60 chapters but fewer words than this books first 14 chapters (which are as far as I have read at this point)

This story is fantastic, I'm not gonna lie, I am immensely impressed. The quality of writing is higher than 99% of the stories on here, the setting while not exactly unique is a step away from the norm.

We have more or less a modern world, but with an affinity-based magic system (e.g. water, wind, fire, lightning, earth, etc) with monsters periodically apperaing out of portals so the whole purpose of mages in society is to fight these monsters (none of which have appeared yet in the story). There's a unique twist on the magic system which is that each person has a 'niche' or 'quirk' or basically a superpower which can be just about anything (examples include quick-casting, hijacking other people's magic, range boosts, hormone manipulation, and more, just about anyone can have just about anything) which prevents the situation where we can have an overpowered protagonist where his magic trumps everything else, (e.g. it's subtly like a superhero story, you'll have to work around other people's superpowers to win)

But what really makes this story stand out is it's characters, it does not have the 2 dimensional characters I'm used to seeing in webnovels, and I usually judge characters quite harshly even when they are not. The most notable thing is that character development is a thing in this story, there are a lot of characters already that have shown more than 1 side of their personality, and a select few who have actually changed in personality, which includes the protagonist who is a huge step away from the norm, after a certain point early on in the story he evolves into a

Chaotic - Neutral type of character, though he borders on Chaotic - Good, he will sometimes do things to further himself at the expense of others, he will lie like he's getting paid for it at every turn, which sort of makes it the kind of story where you have to read it all in one go or you'll lose track of which things he says are lies and which are truths when you return to it later. But in general he's still a good guy. This type of protagonist may not be for everyone though.

I've also seen from a bunch of other reviews that people are getting triggered, half of them because the MC has an open mind, and the other half because there comes a time where he decides he's willing to lose everything as long as he can fulfil his dream. Like I said before, it's simply because he's not 2 dimensional, he's not a goody two-shoes, and he will make decisions according to his own biases like flawed human beings tend to do, rather than always automatically doing what is 'right'.

The politics and factions are also not 2 dimensional and the story brings up a lot of philosophical debates to spice things up. It avoids painting anyone as 'just evil' and so far there hasn't really been any person or faction that is clearly viewed as evil by the protagonist.

The story has only just begun though, I mean I'm literally only at the part where the mc has trained his magic for like a week and is getting into hogwarts magic school, and I am this impressed already.

I imagine there will be a lot more action in the following chapters but it's interesting to see how the protagonist will struggle through that considering that he's got some extremely restrictive limitations that are no doubt going to get in his way very very much for a potentially very long time. He's a weak-to-strong type of protagonist, starting with wind magic so weak he can't even compete with a desk fan, and by the time he gets into school he's not at all strong. He's going at it with a 'fake it till you make it' attitude, and it's a really interesting step away from the 'knows everything' protagonist trope. The only thing that keepss him going is his secret weapon that replaces what is commonly known as 'plot shield' quite elegantly, allowing him to bullshit his way out of the worst kinds of situations, and bullshit he does.

I am very excited about this story, it's definitely the best read I've had on this site, I won't say it's the best by far, but it is definitely the best. And the only off-site novels I know that I liked as much or more are Worm and Practical Guide to Evil, both of which are top notch, I wouldn't say this story can compete with these, at least not so far (you never know though, it's only 14 chapters in so far after all) but I will say it is not far off.

This is a must read.

This story gives me some serious reminders of YA novels I used to read. A kid, who has always wanted something more, discovers a hidden power and becomes the student of a wise and mysterious master of their craft. With barely enough time to learn a couple tricks, he gets sent off to a prestigous school to fend for himself and prove that he has what it takes to be a hero. That being said, I still enjoy these types of stories, and this one seems to be very well executed. Looking forward to seeing how this plays out, even though I can make some general guesses about the plot. Thanks for writing!

This is my first review on this site, but I believe this story is well worth reviewing. The following review is based on the first 14 chapters,

To start, the main character is not massively overpowered like many of the MC on this site, but that said he certainly has the potential to be far down the road. The world is surprisingly fleshed out already, with a coherent magic system and background lore that was dolled out in such a way that you aren’t being smacked in the head with endless exposition. Most of the characters seem fairly fleshed out and there rarely seem to be characters that seem to be evil for the sake of being evil.

Relatively slow start, and so far there is relatively little action, but what has been done has been done well. However, I have a strong suspicion that the action will pick up a lot in the next few chapters.

Grammar, spelling, etc is excellent so far as I can tell, especially in comparison to most novels on this site. Top 99% on this site.

Really enjoying the story so far and really look forward to how it progresses in the future. Would recommend.