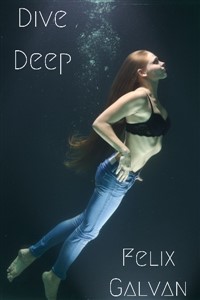 In the not-so-distant future, the Pacific Northwest of America Secedes from the United States and founds the first true democracy named Cascadia. This democracy is founded on technology and has proven itself to be a stable and successful model of government. Its citizens enjoy higher technological levels and happiness than anywhere else in the world, and that has led to the explosive takeoff of professional gaming. This is where our heroes step in. Jose, Laurel, and Nathan are determined to break into professional gaming but had no success until a mysterious backer offered them the ability to join the most anticipated game of all time, a full immersion VR game called Infinita.

This is their story.

This review applies up to chapter 4.

STYLE - It's fluid and easy to read. Not too many bells and whistles, but the author does mess with the prose every once in a while to make it a more interesting experience to read.

GRAMMAR - Better than most online fiction. There are some mistakes here and there, spelling mistakes and awkward sentences, but that's the exception rather than the rule. Overall, provides a pleasant reading experience that doesn't jar you out of it.

STORY - Seems like a standard LitRPG story so far. It's hard to say where the story is going in the future, so we will see if the author brings a new take to the genre.

CHARACTER - The three main characters have pretty good banter with each other. While nothing revolutionary so far, the character traits given to the three mains help flesh them out. I hope the author expands on this in the future.

OVERALL - A recommend, for sure. Keep an eye on this one as it is updated.

It's fun to play out scenarios considering the function of technology and how it affects daily life. As someone who has studied economics and politics, it's interesting to see other people's take on the role of tech in the political process and the possible results of that application. That's just the political geek side of me on the setting, though. I'd like to see where the story goes in regard to the characters. So far so good.

Review as of chapter three:

Style: The style is pretty good for RRL and gets the job done. There's nothing special about the prose; it serves its job and is clear and to the point. I would have liked more description of the settings in the game, but that's just my personal preference and things are fine as they are.

Grammar: The grammar is on point for the most part, though there are several sentences (mostly in chapter one) where commas are used instead of full stops, making sentences unreasonably long and jarring. This has been mentioned in other reviews before, so I won't go any further into it.

Story: It's only been three chapters so far. The story is pretty typical of a litrpg so far—stakes are raised when people can't log out of the game and death becomes permanent, etc. Nothing new there, though as I said, it's still early days and it could literally go anywhere from here.

The main couple are cute, and there are already hints of backstory being sprinkled here and there. Looking forward to how the real life events affect them in game. The side characters need development, but as of now they're fine given how much screen time there's been.

Summary: A decently written litrpg that might be worth checking out if you're like me and can't stand crappy grammar/punctuation and poor prose written by authors who are terrible at english.

Dive Deep seems to be a promising story. The reader is immediately immersed into the action, and it makes me want to read more.

The grammar is top notch and the text flows well, although certain sentences are too long and have too many commas. The setting is pretty standard, but it looks like the author is willing to explore it in more depth than usual for this kind of story.

I like the concept. The way you have gone about it is pretty smart. We are immediately thrust into the drama of the quest to ressurect your friend. That for me, is why I want to read the next line - I want to know how you are going to save him.

To that end, the other characters seem like bit players, but that may be because I've only read 2 chapters of it.

This is simply an opinion and probably a matter of personal preference - I found that some of the sentences have a tendency to be too long and fragmented. Eg "The immediate feeling that every ounce of blood just rushed out of me, caused me to sway a bit, but I fought it down, knowing that If I were to save him, I'd need to focus. " - You could split this into two maybe?

On a side note, "susurrus" is one of my favorite words so you get points for that in my book :)

Attracted my brain so much that I couldn't stop reading it. RIP my exam tho :(

Anyways keep it up and become a prominent writer someday :)