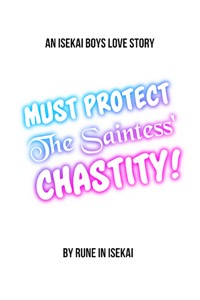 Stomps of feet resounded in the hall.

Several guards in the end of the hallway turned around to find a fuming youth coming their way.

"Y-your Highness? When did you pass through..." one of the guards could only ask. The spear in his hand seemed useless because he was too flustered to make a stance. He couldn't let any trespasser pass through their guards, but there was no way they could bar the exit from the crown prince.

Calen glared at them, before saying, "Scram!"

He probably meant to be intimidating, but the guards let him pass because they had been caring for him for more than a decade.

And Calen knew that.

Still, he couldn't curb down his emotions enough to pass the guards with composure. The exchange that just happened with his... benefactor, had made him retreat like this.

A shame, as a royalty. A real shame of him, the crown prince!

He kept walking until he reached the inner garden where there was a natural pond and a seating area. One of his favorite spots of this small world that kept him inside for years before and years to come.

He grabbed one of the white marble pillars while panting hard, leaning until he could sit on one of the softest cushions there.

Calen groaned. Avi, that old man, said that he had been cured. So why did he still feel this weak?

He wheezed while breathing, and he leaned down, trying to calm his erratic heart beat as soon as possible.

...Yesterday afternoon, he also felt this weak and almost died right then and there. His stupid fall to the river had ruined everything that he worked for in secret, making a secret route that his father had sealed by now, probably.

He hated that his plan was ruined, but what he hated the most about the incident yesterday... was how helpless he was in the depth of that water.

As soon as his head hit the water, his already weak consciousness got twisted and turned inside his head, wreaking havoc and disabling him from holding his breath. Soon enough, bubbles of breath escaped from his lips, and it was the moment where he thought he was going to die, like that.

Robbing himself from a chance of life from one foolish mistake.

...It was truly scary, and that elf was the one who saved him.

How strong could the elf be to save Calen from that water? How long would it take for Calen to become that strong?

Calen took a look at his own arms. For his age, he looked way too small. He knew that, because the gardener's son was only a year older than him, and yet he had been as tall as the young peach tree in the garden. The sickness robbed him of a chance to grow fast in his childhood, and he might have passed that golden time to cultivate a better physique.

Of course, it didn't mean that he was going to give up from being stronger, but it was already obvious that he wouldn't be as strong or as huge as someone else... Like, Alovera...

Flashes of images where his body was unmoving on top of Calen's filled his mind.

Calen felt his face heating up and he groaned.

Alovera had the physique that Calen had always wanted for himself. He looked as capable as the best guard in the protectors' group around Calen, but something about his elven face made him look princely.

Calen snorted. A crown prince like him, saying that someone else looked even more princely was nothing short of ridiculous.

However, it should be a given, he's an elf afterall. Accepting the fact that the man belonged to the most beautiful race in the Hanathea continent didn't make Calen less embarrassed when seeing him in person, though. Especially in that kind of attire...

...And knowing that he had seen Calen in less presentable way as well!

Calen had servants doing many things for him, but that was only before he was 10. He hated feeling helpless, so he never allowed anyone to do those simple tasks like bathing or wearing his clothes afterwards. He had also seen the guards topless, which made him feel inferior with his own body, and that elf had actually seen him...

After he found out that the man was unconscious, Calen screamed for help. His voice was small, but for better or worse, his escape wasn't as undetected as he hoped.

Someone must have visited his chamber and realized that he was nowhere to be found, reported it to the king, and his father dispatched his protectors to find him.

He had the conviction that they would find him, which was why he didn't stop yelling for help as best as he could in that condition.

That was also the reason why, once he found there was a cloak nearby, he wore it immediately to cover himself. One person to see him less presentable was enough. He couldn't let the guards saw him that way as well!

Since there was no one else's around and the cloak looked presentable, Calen deduced that it belonged to the elf on top of his lap. Not long after, he could make stronger voice and had one of the guards to spot him.

Calen's arms were full of dried blood and there was an unmoving man on top of him. If Calen didn't stop Nerine, the guard would have stabbed the elf several times over. It was by his order that they also brought the elf in the same coach as him, being indiscreet as they brought him to the palace, specifically the only area in the palace that knew the existence of the crown prince.

He had Avi, his personal physician, to give the fastest treatment for the elf. After all, Calen knew his own body. He was simply weakened, and several pills that he usually consumed would be enough to return him to his normal state.

Of course Avi didn't trust him and had him examined. However, it seemed that save for some water in his lungs and weakened body, he had nothing else to worry about, which made everyone in the palace breathed easier.

Afterwards, Calen hesitated to return the cloak, but he still decided to do so in the end. He hesitated to have the maid know that they should be washed, though. He was about to take them and told the maid to wash them in secret...

...Only to find the elf was standing straight, looking healthy and impudent enough to pat his head.

He was not a kid anymore! That filthy mongrel!

Argh, if only he could take away the man's memories about how he appeared yesterday, it would be perfect. If only he could be as unnoticeable as his power... The power that he only recently found... One that he never told to anyone else.

He sighed again, and it signaled that he had been breathing normally for a while now.

"I hope I'd never meet him anymore."

But fate works against him this time.

I didn't believe in side story or different POV before, but it seems like a good place to add some more details about what happened the day before, because Arata's POV is unclear and unreliable.