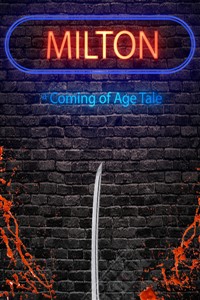 A Cyberpunk Coming of Age Tale

The Apocalypse is ugly. The only lights that work are battery powered or neon. Scroungers kill your neighbors and take control of their bodies. Gang wars run rampant in the perpetual night, as usual, except now, most members have magical spells to defend their turf. Life certainly changed once the Rainbow Letters came.

For Milton, things changed for the better. The world became familiar. He could find loot, learn skills, and equip weapons and armor. It was all much easier to understand than the perils of pre-Apocalypse life with its grocery shopping and going outside.

Then he discovers Ragnarok, Orchestrator of the Rainbow Letters and all of Milton’s problems. The race to figure out why is on. If Milton is to survive long enough to find answers, he must first be strong enough to confront his worst enemy: himself.

* This is work in progress and NOT professionally edited. *

** This story is humorous in the begining, but gets very dark around the turning point. Reader discretion is advised.**

Milton is the hero we have.

This is such a strange story. I love it.

The protagonist is fun to read, the story is uncomplicated, the grammar is very well done, and the style is unique within the ranks of the litrpg.

I won't wait for a chapter drop with bated breath. But when does, I'll be quietly thrilled. Thank you for writing this.

As odd as it is immersive. Can't stop reading!

Wow, this story brought me in like no others on RRL. It centers around a nerd? that goes to his grandmas house to let the dog out, when he receives a prompt in rainbow colored letters that he is about to get ambushed. He struggles to react and defend himself and failed alot of stat rolls in the process, but somehow he makes it through by the skin of his teeth and luck. We are starting to see that the MC isn't just some pathetic neckbeard that can't adapt to the real world or his new world. Milton is growing as a character. The whole thing is as odd as it is addicting.

Now for the stars...

This story would have been near perfect for me, if it wasn't for minor grammatical errors. There is really only a few and they don't detract from the story, but it didn't seem right to give five stars there.

Style - what can I say here. The style is great, especially for a first person perspective. I usually don't like first person, but this is done very well. There is alot of show, not tell. Actually, I don't think there was any 'tell' at all. There is a good mixture of long and short sentances and alot of immersive descriptions that help the worldbuilding as well.

Grammar - Some errors, nothing huge.

Story - I love this story. It is a bit of a mystery as to what is happening and what the main storyline is, other than to just survive, but it works. At least for now. I will change my review if that changes.

Characters - The characters make this story. From the MC, who is a fat, sheltered, neckbeard trying to survive. To Nikko, the homocidal maniac that owns the tattoe parlor. To Lorelai, a seemingly nice college girl with a super punch ability. The characters are great. OH! and the dog! The dog is my favorite. Won't go to far into that because of spoilers. Ever the MCs grandma, who isn't a huge character, was very well fleshed out.

If I could, I would give this a million stars! I follow the author's other works, and this is by far the best, even though it isn't completed yet.

I don't often review stories like this, but hear me out when I say this tale definitely deserves a look.

The name and initial idea may seem off-putting, but only three chapters in and we're greeted to a satirical take on the very saturated LitRPG genre.  Our star in this particular story is the self-professed Milton, who throws out white-knighting and kitana skills like its no one's business.  With his trusty dog Goldrin, he seems ill-prepared for the mundane world and the sublime dangers within.

It's hard to tell where the story will go with this, since it's only three chapters in so far, but it certainly seems promising.  While Milton himself is a huge parody sue (of course) much of the entertainment of this story comes in just how sincere he is about it.  He represents someone we've all known at some point during our lives, and as the story progresses, I find myself wondering if the story will really be about side characters and if Milton is just there to progress the ride.

An interesting and even endearing concept thus far.  I can only hope it keeps its steam and the jokes remain fun and laugh-worthy.

It was a nice short story, imaginative and fun. Great grammar, spelling, and punctuation, too! I genuinely felt bad when... well, I won’t spoil that. But it’s a decently story at the least, so stop looking in these reviews and read it!

This story just wasn't for me, let me just preface with that. I didn't enjoy the humor this parody had to offer me. I found the character obnoxious and his inner voice annoying. My biggest problem with this fiction though, is that when you strip out the fiction, there is very little left.

The grammar is definitely great overall, found a few mistakes, but nothing critical. I agree with other reviewers that this would make a good short story, but without a lot more added in, I feel it would begin falling into blandness.

Story was fine, definitely wouldnt label it an adventure or an action story yet though. That might happen in the future. Again, seemed fairly light, lot of it was based off of the parody.

The chracter and the style go hand in hand here, as my dislike for the character hurts the style. Not only did I find him annoying, I do think that more importantly, Milton's description of the world is lacking and leaves the readers wanting for details. That or he obfuscates with unimportant references that are often too long and then doesnt bring the point back.

To sum up, because the story is in first person, Milton, as the main point of parody, fills the story with inane chatter without really adding much else.

I love game apocalypses and good characters, this novel has both.

I hope you continue writing it.

I can’t look away!

Each line I read I need to know more! Review to follow once I’m able to look away!

A Lovely, Wacky Take on LitRPGs

This is certainly a satire (as all the other reviewers say) so I recommend you look at this story as such. Because under this lens, you can find just laugh after laugh.

Let's start with the style of writing. While it's a bit weird, it doesn't take too long to get used to, and once that occurs the humor of the story can truly be appreciated.

In regards to humor, it's honestly great and on point. The inner thoughts of Milton and what he says are just gold. The way he's self-aware of some of his own shortcomings makes for some self-deprecating moments and is only added to by how bizarre some of his thoughts are. Compounding this with the physical humor through Milton's constant fails in checks and it honestly can seem never-ending.

With the side characters, being that there are currently only four (the dog is in fact a character) really limits what I can say, but the ones we've currently seen are pretty cool and can give off their own laughs as well through Miltons thoughts of them and the fact that they will say things that can be extremely suggestive.

Storywise this story falls short, but mainly because its just starting and still needs to pick up steam. This is probably my biggest spot of worry in regards to the Neckbeards.

Finishing this off, I honestly found myself just laughing the entire time I read this and can't wait to see what comes next.

(There were three available chapters at the time of this review)

The story is a satirical take on the “System arrives to Earth” sub-genre. Milton, our protagonist, has to survive the chaos caused by the system’s arrival. He’s armed with his katana and is accompanied by his trusty dog, Goldrin.

Now for the proper review:

-The grammar is on point.

-Well written, a good take on the overrepresented genre.

-The humor is top notch.

- I hope the author will not rely on the same gimmick forever (Milton being a huge neckbeard) otherwise the story will become boring very quickly.

So far, nothing much has happened since the story is in its early stages. But the few available chapters have given me a good impression, so I hope the author will keep the same level of quality and put his own spin on an otherwise tired genre.