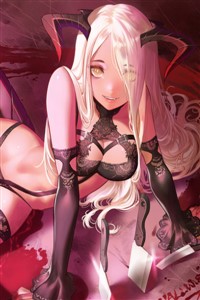 "When life gives you lemons, you should be grateful that it is only lemons. It could have been AIDS." - Hilda Caligari

Just because life throws you away as worthless does not mean death has the same ideas. The chance to be reborn and live a second life is tempting, assuming you don't get stabbed to death or worse. For a former sociopath experiencing emotions might seem troubling, until the realisation sets in that they are now alone and stranded in a new world in a female body. Of course, alone discounts the distinctly demonic, succubus looking spirit stitched to their soul, who has an uncomfortable love of sharp objects, knives and stabbing things. All of the things.

The new cover art belongs to the wildly talented Salmon88 (S88). If you'd like to check out some of his other artwork you can find him on - https://salmon88.deviantart.com/ and https://www.pixiv.net/member.php?id=9001612

At first, curious but now I am addicted!

Just as what the titles imply, I only checked this out due to curiosity (as I am in need of a good read) and shamelessly because of the image cover also. So here we are, a reincarnation novel to another world. A genre that it can be called a cliche at this point with how often it's been used. Half of the time, such stories are only good at the start but becomes slate as it continues or outright horrendous regardless of how good the premise is. And there are times, it becomes a great success. I can confidently say that "The Hollow" is one of these. Trust me, I've been lurking over the internet for a good amount of time, hunting for a good reincarnation isekai novel to read and I've found numerous. Anyways! Why can I say "The Hollow" is one of those good ones out there? It has the potential to be! Here's a little breakdown:

Style: The author does a good job of presenting us the characters and the world as it is without any confusion or whatsoever. Written in the first person, we can feel more intimate with the main character despite their.... personality. Anyone who isn't the main character is written from a third person perspective. A case of readers being omniscience is unlikely, giving the thrill of piecing together what may happen next based on the hints and foreshadowings being dropped. No info dumps of sorts that will kill your brain and the immersion. In fact, you'll feel yourself reading more and more.

Story: This is a reincarnation isekai story and that means our main character is transported to another world, into a new body, as a new existence.... more or less. There are the so-called "cheats" but they're not crutches that let the main character bulldoze everything with these cheats. They are but tools our protagonist uses to their benefit and in a clever way. Is it just easy sailing for our main character and their companions? I would say no as the chapters so proven that there will be friction and obstacles for our main character to face and for us readers to look forward to. There are surprises to look forward to. And I really like the quotes presented in every chapter that gives us a bit of something to ponder before we dive into the chapter itself.

Grammar: Here we are, one of the likely things why a good novel ends up not entertaining, or least entertaining. For "The Hollow" there are almost no grammatic errors. They are present but inconsequential that the grammatic errors don't break the immersion because they are too distracting. It's a well-written story.

Characters: Ahh~ here! Here is one of the reasons why I love this story and completely addicted to it. The author presents us with characters that aren't one dimensional but characters that are fleshed out. Especially the protagonist as they are portrayed in an interesting way that makes me eat everything up. I won't specify how as that's a slight spoiler but they are fun. Along with the conversations, the desires, and emotions showed to us, I highly anticipate what will be brought in the table in the future.

By the way, I wrote this review when there are only twenty-three chapters out so far.

A surprise to be sure, but a welcomed one.

Just as the title says, I did not expect this story to be of this high quality when I first started reading it, yet you surprised me, in a good way.

You shall read greatness.

There is a lot of conspiracy, evil plotand manipulation in this novel. The grammar is good and the characters amazing! Hilda is my favorite, I hope to read more about it to develop a more fitting review.

Very interesting and has a nice flow

I is a fantastic story the author now how to depict characters with out putting it on to much as to ruin the story, any complaints I do have are my options and have no place in a review

To be honest, i came to here just because of the gender bender tag, but the story made me stay. Sorry for the bad review and bad english, i just want to encourage the author.

The protagonist is OP from the start so the story reads like a sandbox world rather than a narrative with any dramatic tension. It's fun in its own unique way but can't help but be less engaging than a story containing a protagonist with actual limitations and desires. The Protagonists sociopathy makes them feel like a video game player interacting with a bunch of well developed NPC's whose fears, hopes, and dreams he can't relate to even though she can recognize and enjoy playing with them. The world feels plenty real and fleshed out but through the Protagonists OP sociopathic viewpoint the world acquires an unreal quality.

The story has almost no foreshadowing giving the reader no sense of progression or setbacks even when interesting events happen.

The story has good grammar.

The weak story telling is the limiting factor on an interesting world, plot, and characters.

So shallow you can study thin film interference

It's alright for a first attempt at writing but overall it's quite confusing. Stuff just seems to happen without explanation and the plot jumps forward blindly. The characters are also very shallow, almost caricatures of people. Worth reading if you're stuck in an airport with nothing else to do.