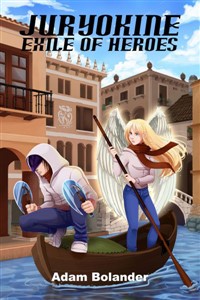 One year after Toke Gnasher, the infamous Juryokine, saved the city of Sorakines from his fallen hero, he and Zashiel are still on the run from a nationwide manhunt. Dubbed a terrorist by his own people and an unholy monster by Zashiel's, the two of them seek refuge in the neighboring country of Vlangur. There, they find work on the Seventh Swordfish, a floating circus with a mysterious ringleader. They aren't out of danger yet, though. Word of Toke's exploits has given rise to a cult with him as their guiding deity, and the vengeful Sorakine commander, Sir Klevon, has deployed a hunter more deadly than any they've faced before... Zashiel's sister.