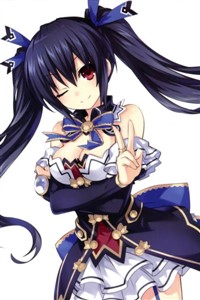 This is a story about friendship and love. Even the former is a grand achievement for Lastation's CPU Noire. After she has finally made her first official friend in K-sha, where does that leave Neptune? In a strange turn of events the protagonist of protagonists and the former Gold Third member engage in a competition over who has the right to call herself Noire's Best Friend!

This story takes place after the game Megadimension Neptunia VII. Characters and plotlines of the game will be referenced.