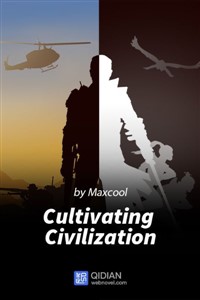 Cultivating Civilizations are horrible places for people to live.

Abducted from his retirement, Jack was placed into such a world.

He has two options. Either he can follow the traditions of the world and kill his way to the top, or try to change the world into one where people don't have to.

Follow him on his path as he tries to balance his past life's morals with this life's realities.

Jack doesn't care that a sea of people stands in his way, he will nurture a sea of his own and drown them.

I hope you like my novel. If you want to read advanced chapters then you can visit this site.

You can visit the novel's Discord through this link.

I will post at least 1 chapter per day here.

Positive: The grammar and spelling seem solid.  Interesting MC with plenty of room to grow.  No OP MC here (yet).  Its early but i'm enjoying  this twist on cultivation stories.

Negative:  The MC has the soul of an Old man (Gramps). You'd think he would be grumpier.

don't get put off by the early chapter,it worth it

this is the most realistic and well done cultivate novel I ever read here, and at first, it looks very grim dark and thing not going well for the mc at all, but more later it becomes more and more better, especially after chapter 34 that everything become more positive now, if you worry about the nearly slave part, just try read to chapter , I think around 1.30

I usually don't like cultivate novel but this is a exception

edit at 19/6/2018: this story is really thought out and doesn’t shy away from small technical explanations of reincarnation and spirit energy that other authors are either to lazy or afraid of writing about. Furthermore, not only is the story intriguing the fighting is engaging and well fleshed out. It’s also nice not to hear every enemy ever say the same exact thing billions of times. I can’t speak for others but all of these things together make this story better than a large portion of the professionally written ones which fall into the same tropes with predictable plots and bland writing

(sorry for copy this new comment at that site from you, 'Broski', but this sum up pretty good and will help other reader have beter idea for this novel)

(have to borrow other comments, but the amount of idiot is so god damn high and their comment right to the point)

I have no idea why these people are having a fit over this chapter 1.4 , this is normal tame even compared to other things in the genre. Even the supposed good guy main characters do some messed up stuff on their cultivation paths, including destroying others souls, wiping out sects even women and children but of course this is all completely justified and they can do no wrong. But this is just pure survival

So people would throw a fit and demand the author change the story because the protagonist prevented a soul from reincarnation in order to preserve his own life? Did you people ever even read a xianxia story before? I can't think of a xianxia world where wholesale slaughter of innocents is not an ordinary part of life in some way. This is pretty normal for a xianxia story; if things follow genre conventions, probably billions of those souls are destroyed annually for various reasons. But from Jack's perspective, who still has the outlook of a modern day man from Earth, this should be a decision that he struggles and comes into terms with in time. It's normal for a cultivator, but it'd be weird and unrealistic for Jack to go "I stole a baby's body, did what I had to do" and just shrug it off. Author did a good job with his characterization so far, so I'm hoping they continue with it in this aspect too.

He was afraid and wanted a body he simply removed an obstacle to his continued existence. The soul in question he destroyed was probably just like him except that it was purified and lost all memories of its previous life after spending an unknown amount of time in the soul river. He killed something that could probably barely be called aware, I'm not saying it's exactly a good thing but it's realistic

why go to Webnovel?

I'm sad it went to webnovel.

I had a great time seeing that earthling trying to conquer his path of survival adapting earth technology to cultivation techniques and civilization !

I liked this story.

I liked the start premise: a world lost soul of a modern man trying to make do in a very harsh and terrifying world of super beings.

If you like the idea of trying to use modern thinking to overcome deep ancient and tyrannical thinking...here's a story for you.

In some ways it reminds me of Release That Witch and the another RRL : The Dao of Magic

In the end, the author is trying to  tell the story of how a modern 21st thinking person will try to change an ancient system of thought and lifestyle that strangles mortal beings.

Come with me on this voyage of discovery!!

Its an interesting story with a good twist.if you like story which shows why things are done that way,then this is your cup of coffee.great cultivation story

A cultivating story that has a slight twist in it, at first i thought it would be like all the others cultivating  books an op Mc here and an incredible artifact there but i found myself surprised by the storyline and intrigued i cant wait for more.

Amazing take on a xianxia setting! Plus there's a ton of intersting characters that have real depth to them (which is something you don't usually get to see in this genre).

I'm really loving this story, can't wait to see what happens next :)

The stories are great till now.No excessive slaughter like other wuxia novel.Plot are interesting so far.Can't wait for next chapter and please continue work auther.Good luck

a refreshing take on an old man reincarnation tale

The first chapter hooked me and refused to let me go! the MC is realistic and clever with a snarky "Im over this shit, now get off my lawn or lose teeth" type of attitude. Great job!

Don't see any point in expanding my review, I highly recommend :)