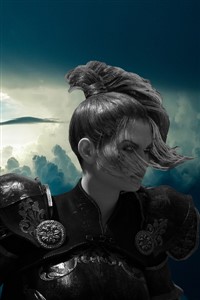 Tales of My Ascension Have Been Exaggerated

Chapter 3: Either A Barbarian, a Hero, or an Archer Walks Into a Bar

Once the cover of night fell giving the trio enough concealment they put their plan into action, setting each group of horses down a different road. There were fifteen horses in total, so they made four decoy groups, while they took the road directly east. The road would lead them to the city of Kanazaval on the Gaithal River, where they could find a ferry that would carry them up to Daksalnir, the capital of Relania.

Taking that route meant they would only have one more stop before their end destination, which was both beneficial and dangerous. It would mean the road was less populated, so there would be fewer people who could give them away, but they would be more exposed with no refuge for miles if they were attacked again.

For the first few hours of the ride, no one spoke as the tension of possibly being hunted by assassins weighed on their minds, but eventually, Kyron spoke up, “So Val, your dad said something about you applying to the military academy Daksalnir?”

“Yeah, they have some of the best arcane tutors in the country. I want to round out my skills you know? If I can be well versed in both martial and arcane strength I’ll feel unstoppable.”

“Speaker Srough despises magic, but understands its value. If you can keep your strength and learn magic even chondricthian warriors would be wise to fear you.”

“I’ll take that as a compliment.” Val smiled as she looked to the south, wondering how long it would be until she could see the delta that formed as the Gaithal River began to find level ground and flow into the ocean.

“So what type of magic are you thinking of learning?” Kyron prodded further, “I’m willing to bet you’d be excellent at transmutation.” He started to mime attacking with swords, “You know, changing your weapons mid-fight.”

“Well, I want to learn a little bit of everything, but, I was thinking of focusing on enhancements. If I can make slight alterations to myself to fit the situation better I’ll be more versatile.”

Kyron laughed, “Shapeshifters have always baffled me. If they can change their aura to become something else, why don’t they just alter themselves to become invincible?”

“I think they have to follow some sort of blueprint or something. They’re not titans. They can’t create something unnatural. Maybe if someone gained enough power, or found a zokai strong enough to produce that level of energy.” Val said thinking about the fundamentals of magic she had studied in her father’s library.

Every living thing across Telemera bore an aura around their bodies, and that aura was a source of arcane energy that sapient creatures could tap into to achieve incredible feats. The stronger a person’s aura, the stronger the magic that they could conjure, but there were certain artifacts that carried their own auras, known as zokai, that a talented mage could use to achieve power beyond their own capabilities.

“So you’ll just have to get strong enough to do it then right?” Kyron teased, “I dunno, I don’t really have any magical talent.” He gave a quick shrug, “I’ll just have to improve my aim enough people think I’m cheating.”

“Hey, look ahead, there’s the river.” Val pointed out. “And there’s the city. We’ll need to resupply before heading north. I doubt any ferry will be willing to feed a chondricthian. For free even less so.” The river in question was far enough across that from their vantage point it stretched onto the horizon.

“I feel like one of us should go in alone to secure the ferry passage. A chondricthian in town is sure to spark up rumors.” Kyron mused aloud, “We need to be in and out before word can spread.”

“I’ll go.” Val volunteered, “If there are any people working for the group that tried to kill us in this city they might have your description Kyron.”

Without further discussion, it was decided, and Val pushed on ahead of the others to secure their passage north. As she approached the city the rural unkempt path transformed into the smoother ride of an official road. Even Val’s horse seemed to appreciate the change as the gentle creature gave a whiny after the first few steps.

When she reached the gates of the city the guards on watch motioned for her to slow down as she approached, “Hail traveler! What business have you in Kanazaval. Doesn’t look like you’ve brought anything to sell.”

“Just trying to get passage to Daksalnir,” Val replied not wanting to give any unnecessary information away. “I’m thinking about attending the academy up there when I’m old enough.” She wished that she hadn’t needed to lie to the man about her true purpose, but she took solace in knowing that what she had said was also technically true.

“Carry on then.” The soldier nodded motioning for her to enter the city. “Good luck finding a captain. They’ve been having a slow season, so most of them are drunk at one of the pubs.”

Val thanked the soldier for his time and then headed towards the pier finding it just as the soldier had described. There were several riverboats and ferries tied to the dock, but there were no captains or quartermasters to be seen. Val decided then to follow the guard’s advice, looking around for the taverns and pubs where the captains and crews might be drinking away the lack of business to keep them occupied.

When she found a suitable tavern that wasn’t in the midst of a brawl, she tied off her horse outside and bravely ventured inward. What she found was a poorly lit, and even worse smelling environment. She quickly noticed the bartender staring at her, and found herself wishing she’d worn a hood. Her red hair often made her stand out when she wanted to blend in. It was an uncommon hair color in Relania, but it wasn’t so unique that she was identifiable purely by her hair. Val tore her attention from the bar and began to search for anyone who looked like they could sail a ship.

The first few captains that she spotted were so drunk that she doubted they’d even register her voice if she’d spoken to them. The next two seemed more unscrupulous from their choice of drink and company. Finally, she found a captain who barely seemed to be into his first drink, and she perched herself at the bar next to him. “Greetings sir. I’m hoping your ship is for sale.”

“As if you could afford her.” The captain groaned. He was wearing a long blue coat that was worn open and tattered to pieces. “I used to be the finest captain in the royal navy, so I don’t do charity work.”

“Well, if you ask me, you should at least offer a price before declining someone passage. For all you know I could be a noble traveling in rags to hide my identity.” Val retorted back, a little offended that he thought her poor.

“Well, you smell like you’re from Brackshore. Or maybe further north?” He smirked knowingly at her. Val found her hand reaching for the hilt of her blade, “Not to worry lass!” The captain continued, “I don’t have a thing against Brackshore. It’s just all the different parts of the coast have a slightly different smell to the ocean air. The further north you go on the coast the cleaner it smells.”

Val kept herself tensed and ready to move, not trusting that this captain actually meant no harm with his words. “Fine, so maybe they do, it’s not like I crawled out of the ocean then came straight here.”

“Aye, my nose is sharper than most. It’s why I don’t usually frequent taverns.” He said pinching his nose before taking a swig from his mug. “Either way, call me Leon. If you can afford one hundred gold, I’ll take you wherever you’re headed.”

“And two other passengers?” Val asked making sure of the price she would be paying.

“Aye, but if any of you or your company prove to be capable we’ll put you to work on the deck. It’s only fair since you’ll be taking up so much cargo space.” Leon demanded keeping an even tone.

“Thank you sir. I should go collect my other passengers.” Val said putting her coin purse on the bar next to him. “There’s two hundred gold in there. We’ll leave as soon as I return.” Val stood to leave but then turned back to face him, “I’d appreciate it if you’re crew wasn’t too prejudiced against the species that live underwater. She’s our special guest, and we wouldn’t want her to feel unwelcome on her first trip to the palace.”

“Oh, you wouldn’t dare bring a shark onto my boat now wouldya?” The captain called after her incredulously. “If you are I’m doubling the price and making you lot work for free!”

Val pretended not to hear the man, but smiled to herself. If he was only upping the price, that surely meant that he was fine with the proposition, but it would make his crew uneasy. She gave a quick wave to the captain behind her, and ran back to her horse. She greeted the creature and calmed it down before untying the thoroughbred and racing back towards the road where she had left the others.

When she passed back through the gate the guard once again called out to her, “Come back soon! We hope you enjoyed your stay.” Val wondered if he genuinely meant that or if he was required to say it as part of his patrol.

It didn’t take long for her to meet back with Kyron and Srough, but they were both eager to see her. The pair mounted up and rode back to meet her. When they arrived, Val explained the situation to them, and when everyone was ready they began to ride back to meet up with the captain and resume the journey north.