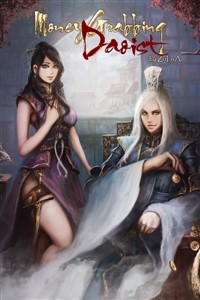 Immortals; the esteemed figures depicted in legends. Mortals across the worlds can only ever dream of becoming one. This great ideal haunts the great populous immensely and anybody given half the chance will desperately scramble to obtain the ability to cultivate!

Yu Yin however, thinks otherwise. Hailing from the great Yu Family, he never wanted to walk that path. All he ever wanted was to live his mortal life in luxury and enjoy it to the fullest. Unfortunately for him, his appetite for wealth and treasure dragged him down that path anyway!

„Money-Grabbing Daoist“ is an adventure cultivation story about a young man named Yu Yin, who is on the run from his family’s palace in order to find out more about himself and to discover the art of cultivation, that he has neglected to bother trying to learn for his entire life. Back at home, he’s seen as sort of a ‚good for nothing‘. First off, I’ve never read a cultivation novel, so do forgive me if I’m using the term incorrectly.

Yu Yin is a bit of a trickster, or more aptly said, a thief. But he doesn’t see himself as that and seems to have deluded himself with his absolutely egotistical mannerisms. This isn’t a bad thing though, as I find him quite humorous. He’s not a bad guy, he’s just… kind of a greedy jerk, you know? But a lot of fun haha. His very first goal? Rob a gravesite. Yu Yin uses so-called bloodline magic to enhance his capabilities on his adventure.

Fate intervenes in his grand plans though and he’s thrust into a life or death situation with the side character of the story Layla who carries with her a strange series of cultivation techniques that she, in their shared desperation, lets Yu Yin learn in order for them to escape. The two of them are fun to read about and have a good connection, especially given Yu Yinn’s short temper. I do wish the author would stop describing her ‚physical beauty‘ every few lines. It gets a bit too much for my taste. But she’s a good character and both of them are likeable in their own way I feel.

The grammar was solid and I found no spelling mistakes of note. Worth mentioned is that the prose felt very fitting for this kind of novel. It’s hard to describe, it just has a certain sort of narrative fluidity. The way its told is very colorful. I also like how the protagonist develops during the story, especially during chapters 8-10.

Apparently, the novel has been entirely rewritten and is now being continued after a long hiatus. Though I was unaware of that when I started. Does this hold up to other stories in the genre? I can't say, this is the first and only one I've read, but I was pretty impressed.

All in all, if you’re looking for a cultivation story with a lot of happenings and if you don’t mind a very ‚rough-edged‘ protagonist, then give this one a fair shot!

Made an account just to give this a five star. The story is well done and the main character is relatable and likeable. Eagerly awaiting for more chapters. The grammar is also very good it felt like reading a professional book.