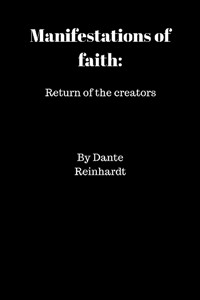 Manifestations of faith: Return of the creators.

This woman would change my life completely, and it was that damn appearance and demeanor that attracted me. She was otherworldly beautiful, but she didn't have the sexy demeanor that I am usually attracted to. She was like a plank lost in a lake, floating there, unfeeling and uncaring towards the world around her. It was something that made me feel lost in her dazed eyes, and I could only get myself together after I heard...

"Oh! You are awake. I thought you would sleep until tomorrow. Come down here."Hans spoke when he saw her, he had a warm smile on his face, the one he has when he's worried.

The woman came down the stairs, she then stood in front of the stairs and didn't move afterward. It was as if she were a robot that completed its mission, It had no reason to go beyond it was ordered.

Hans looked at her and sighed, he had worry written all over his face. I know how he is when he's worried, he reveals his soft mother-like nature. I have never seen he worrying for anything else besides me and G, he also worries when he has problems at work, but all he says is "Dis' shit is tuff!", he uses a weird way of speaking from a long time ago when he's pissed.

"Sophia, please sit on the table. It is unpolite to stand during dinner."He says as he looks at Sophia.

I and G look at her and frown, we know very well what is happening to her. But that only makes it weirder that she is here. Then G looks at Hans and asks.

"She is an Inan with a heavily damaged building, isn't she? What is she doing here?!"G says in a harsh tone, he gets really defensive when people come to our house, he thinks that everyone besides me and Hans is dangerous, but because of his past, we can't blame him for that.

"Hans, why is she here? Are you taking care of her? Did you find her somewhere?" This is something is am asking not because I want her to go away, but usually, an Inan in such state isn't managed by normal people.

Hans shakes his head at my question, he then struggles for a little while before sternly explaining the situation to us.

"Her building is a really important monument, and it is my work to restore her memories and personality, so we can then restore the monument. But as this is a difficult task, I had to make her come here and try different things… And as I also have another professional Historian here, it will be a lot easier."Hans said, for the first time giving us a hint of his identity.

You must have been asking yourself what I meant by 'isn't managed by normal people', and when I said that, I meant it is made to be managed by a historian.

Historians are the most influential people in our world, and also the most intelligent and that have the fewer numbers. Because of manifestations, the amount of information we have on the past is gigantic, and most technological advancements came from the knowledge of lost technologies from the past. The super-activation formula that can regenerate limbs after some time, came from an ancient recipe that was used by the Egyptians to increase the slaves' strength, making the rocks that were used to build the pyramids easier to carry.

After that, we proceeded with the dinner. I and G asked many questions to Sophia, and it seems that she doesn't remember much, but she remembers she isn't a trap. I also had a fight with Hans because he never helped me with anything Ph.D-related, even though he was a historian all this time, but the ones that fought were him and my pawn, G. Because as an intellectual, how can I have a fist fight with someone that works as a field historian for the union? Those guys enter dangerous places and are attacked almost every day, it would be preposterous for me to fight him. And I also discovered that Sophia is going to study with me in my normal-person university.

After we cleaned the mess that happened when those two muscle-heads fought, we all went to sleep. And Sophia was going to sleep in my room.

My room had an arrow-point form, and in the entrance was my couch, video-games and entertainment devices, and also mine and Hans' giant mountain of RPGs. Both of us are RPG lovers,(The FPSist Giorgio is a black sheep.) Hans is into those Old School things from the twenty-first century, and I like them as well but... I still like Full dive VR MMORPGs more.

At the other end, after the turn where the corner I kept a gigantic minefield of miscellaneous trash was, stayed my bed and my massage chair. As a gentleman(Pervert and Polite Person.) I let Sophia sleep in my bed.

I slept well until about midnight when I woke up because of footstep noises. They were light footsteps that came from Sophia's side of the room. And when I heard those noises I started shivering. Why?

"She's a Demon!" Because I saw waaay too many horror movies. (My mind actually just flips into the full chunni mode every now and then.)

I then get up from the bed and take the anti-rapist baseball bat I keep under my bed, (I am so Handsome, what if someone tried to rape me?!) and step softly on the ground.

I go towards the corner that leads to the other side of the room, I put my back against the wall as I listen attentively...

I heard nothing but the sound of my dumbness...

That is when I relax and see around the corner, to check what Sophia was doing. After looking for a second, I turned around and went back to sleep, because everything was normal and okay and she definitely wasn't possessed...

That bitch was looking outside the window in the creepiest way possible!!! How would I go back to bed if I can't move out of fear?! Priest! Call the priest! There is a demon-possessed girl in my bedroom! God fucking damn it, I swear that if she turns her head backward I am going to die of a heart attack!!!

Calm... CALM THE FUCK DOWN DANTE! Get your shit together and fucking crusade the shit out of that unholy being! Yeah! I have a plan. I roll towards her and sneak attack the fuck out of that bitch! And then I say that 'Say your name Demon!' thing I saw in that movie. After that, I call a priest and exorcise the shit out of this demon! Leeeeeeroy Jenkins!

I had the most stupid idea at that moment, but I was having fun so my common sense didn't stop me. I stuck the bat closer to my body and executed a judo roll that G taught me.

But then I noticed that doing that while having the bat so close to my body was really difficult, but I didn't stop as I said 'Say your name...' and rammed my head into the wall...

I felt my head hurt, but not much as I wasn't really fast when I rolled, as I only learned it in a half-assed way. I was really afraid to open my eyes because I noticed I had gone too far with this little game, and I could even feel someone was laughing at me.

Ultimately, I opened my eyes slowly as I looked at Sophia's face.

Surprisingly, she wasn't looking at me, as she still gazed outside the window. But her dazed eyes now reflected the beautiful starry sky of the lightless city. I never felt so grateful for the energy saving policies the government imposes.

I hastily got up as I dusted the dirt that had accumulated on my pajamas, as my floor was nowhere near clean, and looked at Sophia.

I didn't say anything and first looked at the sky, to try to catch a glimpse of what exactly could wake her up so late in the night. But all I saw was the starry night sky, and the city on the horizon. There was neither an airplane nor a helicopter on sight. I then looked at her again and asked.

"What are you looking at?"I asked curiously, using my usual roundabout way and my all-encompassing social tact. (And now my sarcasm as well.)

She then answered me in the vaguest way possible.

"Something beautiful."She said. Even though that explained nothing.

"What EXACTLY are you looking at?"Again, my social skills were unparalleled.

"I don't know."She said, making me even more confused.

I then kept looking at her for a few seconds before turning towards the sky again. The sky was still empty of anything besides stars, and for some reason, I couldn't get myself to crack a joke using pseudo-philosophies like 'You are seeing the ghosts of stars long dead.' or 'You are seeing how small you are'. I just stood there and gazed at the sky with her.

I gazed at the chaotic cosmic dance that would change eventually.