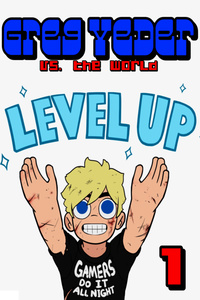 Greg Veder vs The World

Lover of All Things Worm

The average person can easily understand that when it comes to living in a villain-infested, crime-filled city like Brockton Bay, treating life like a game can get you killed.

It's kind of ironic, then, that Greg Veder has always been far more serious about games than he ever has about life. (Worm/The Gamer AU)

Lover of All Things Worm

I have never read Worm, and even without the, no doubt important, background information from that series, I am loving this one.

The character is just strange enough to be interesting.

The story seems well thought out, or at the very least well written enough to hide its flaws.

The grammar is immaculate.

And all in all it's a good fun read!

Its very hard to review this story properly, I'd say the overall package gives this is a +1 rating but there are some smaller ticks that are somewhat irritating.

I'll get into it at the bottom of the review, as my overall bias towards this story is very positive. The little issues are easily outweighed otherwise.

So, let's get into the four review points.

For starters, the style. I would say, the style is reminiscent of webnovels. It is enjoyable to read, quite amusing too. I ended up laughing too. However, as I said: it's a webnovel style. The writing isn't the vivid "artwork" esque style. Overall, it does a good job at the way it is expressed. I like to read it. It also has a somewhat unique spin to it, not overly so but still noticeable.

Grammar, well. I don't have any complaints on that one. It's good, I think I noticed less then a handful spelling issues. But most of them were intentional choices tying to the style. Sentence structure is pretty good, I didn't have to re-read anything several times over to grasp the meaning.

Story, well. Super hero story with a touch of the gamer, and likable characters that are involved. I hadn't noticed while I read over this story, but it has no story. Which isnt bad per-se, no story wins over bad story. But I still think that 3/5 is the most fair choice that I can do here.

Again, I'm not saying the story isn't bad but rather that you won't notice the story. And I hope the author doesn't misinterpret this. The only thing worse then a bad story is a forced story.

Again. The story isn't bad. It's not there, you won't "miss" it because it isn't noticeable. You won't get upset over it, because you literally won't notice it. I enjoyed reading the entire length of this.

If I had to make a comparison, Minecraft is a good one here. You can sink a lot of time into it, without ever noticing a story. You see anyone complaining about it not having a story?

Characters, you know. The protagonist is capable of carrying the whole section here on their own. It's a lovable character. Cute, somewhat silly. And it doesn't feel forced. Put simply, this is one of the few cases that I actually found the protagonist to be likable. Not very much identifiable with, but likable.

For one, the sense of humour. I found it rather enjoyable. The monologues are quite fun to read too.

Next up, I'd say +1 for a gamer ability. I like those genres a lot.

Right up next, the protagonist isn't a case of sudden genocidal maniac. They feel like a person, and I don't mean brain damaged CN protagonists or beta JP ones. So, yeah. +1 on that.

Now, I ended up capping this review at four stars. It's spoilerish.

Firstly, we got a serious case of levels being completely and utterly bullshit. I am talking fighting someone close to ten times your level and winning. With what is effectively a head-on collision driven by a dodge based fight.

Secondly, honestly the gamer aspect of this story is extremely thin. As in, sure. You see stats pop up. You grind skills. You got consumables. But overall, to me, it feels just very thinly laced. A bit more of a background, rather then one of the real aspects of it.

Thirdly, a real case of paper villains. As in, I know I said something else above. Friends, family, rivals (?) actually have depth and feel like someone. But the hostile parties are just ... paper. It's at a point where you may aswell call them "Enemy #136"

Fourth, this is an extension to #1 but the power dynamic of this story is just a disappointment. Jumping from, well, beating up junkies and drug dealers to hunting down a syndicate/terrorist mix that was effectively untouchable by the definition of the story ... Yeah. It's very irritating.

More entertaining then the original

Reviewed at: Cutscene: I Need A Hero

I'm normally one to avoid fanfictions, but the premise interested me so I decided to give it a shot.

I'e only read the beginning chapters of The Worm, but I'm quite femiliar with The Gamer.

My first impression of The Worm is that it's a grimdark superhero famtisy, that takes itself very seriously.

In this series, the world is the same.  But because the new MC's perspective is very different from the orig, it gives it a completely different tone without actually changing much of the base.  The world is still serious, real knives, guns, and death.  It's adressed that people with powers (or "capes") tend to be personally affected by the powers they own.

Our MC in this series, has the power of The Gamer, where he becomes a game character.  With a body that can't be permenitly damaged, and a mind immune to trauma, he treats every situation like it's a game.  He's light-hearted, easily excitable, quite adorible and is dangerously niave to a fault.  The author discribes him to be like a puppy, and I definitely agree.

Other characters are worried for his mental state, which keeps the series grounded in reality and the MC from being stupidly OP.

For example, normal people would be freaked out if your power required you to bash yourself over the head with a wrench to get stronger.  But not only is Greg fine with it, he's quite happy about it.  Since it's only the results that matter to him.  No matter what it prompts him to do. Strong emphesis on that.

Alarming niavity aside, his personality is refereshing from the MC from The Gamer. Who considered his new power and surviving with it a chore.  Greg's happiness with his new situation is contagious, with how many of us picture ourselves being in his place.

A slice-of-life/comedy character stuck in a grimdark world, it's no surprise his personality is concerning to friends and loved ones, and heavily disturbing to rivals and enemies.  It's extremely entertaining.

Props to the author, you're writing the first fanfiction I greatly prefer over both original source materials.  Keep up the good work.

I love it so far. I know that this is a fan-fiction base on the Worm series, but it is written well enough to stand on its own.

This shit is fire. Emotionally compelling, not too deep into menus and numbers, and the story is constantly moving. The characters are unique, side characters don't feel too much like caricatures. Great work overall.

This story brings a smile to my face.

I must say, this is one of the only stories on Royal Royal where I can say I like it without faults rushing into my mind. This story doesn't seem to have any faults that are large, I mean, the grammar is great, no spelling mistakes that i've seen, and the characters are all individual.

I must say, Greg is quite a great Gamer, and I can't wait to see what other adventures he has.

Well-written but the main character unlikeable

This story is well-written technically and has mostly good characterisation but the main character is a total sociopath due to his powers. Unfortunately, this makes him thoroughly unlikeable and limits his character development.

He is also not very smart, emotionally or technically. He has no idea how to minmax his absurdly broken abilities, picks fights for poor reasons, is a dickhead to his family and friends and his fighting style consists largely of: ' run at it and hit it until it stops moving' even when he has limitless potential.

He doesn't really have any goals, plans or strong limiting beliefs other than 'getting stronger' or punishing those who are 'bad.'

Despite all these glaringly obvious faults, he hasn't really been punished for them in a way that matters. Traumatic events are shrugged off, level of brutality is dismissed, lying to his mother is brushed over. Nothing severely affects him because his powers don't LET it effect him. Sure, it's all mentioned that he is guilty/angry or whatever but his behaviour and interactions with others are largely unaffected. I hope there is a significant reckoning for his behaviour and sociopathy that actually impacts him and what he does in the story.

The way he treats his mother also INFURITATES me. He is truly a horrible son - a lying, gaslighting, hypocritical, arrogant, ignorant ass.

Don't need to know the orginal to enjoy this

I don't know the original story was about but despite that I very much enjoyed this story. I guess thats what seperate a good fanfic to a midiocre one and I applaud the author for such a accomplishment.

hearty read! recommendation is in order!

thx for all the hard work until now!

review as of chapter 4.2

loved it. Had some laughs. Read it with a smile.

no real suggestions from me, havent found any problems at all.

it was just a nice hearty read, which necessitates my scoring.

A great read, I thoroughly enjoyed the entire story! Classic power set but used very well, main charecter you can get behind for sure!

Havnt actually read Worm but you don't really need to to enjoy this story!

I was a bit wobbly about his mental condition but I think author handled it okay.