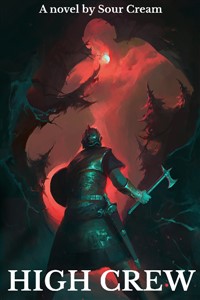 Sea Betwixt is a world full of gruesome battles, plundering raids, political intrigue, struggle for success and recognition. Only blade and wit will allow one man to rise above others here.

But make few steps away from civilization and you will face evil spirits, eldritch beings, enchanted places, monsters from beneath the sea and giants from the uncharted East.

A young warrior named Ymdaton will cross this boundary between gritty warfare and mystical encounters many times, as he follows his lord on a quest for dominance. Follow him on a journey to the land of Drevlyani, a small stubborn nation struggling for survival in the unforgiving primeval forest. Will our hero claim his place in legends despite the terrible price it could cost him? Read High Crew and find out!

It starts off really slow and confusing - as you are thrown with a grown protagonist, in an unknown world, with people speaking about things you have no idea about - but If you like Berserk, The Witcher, Vinland Saga or any works of dark fantasy in general, you will probably also love this, if you can push through the first few chapters.

We have a battle-hungry protagonist, who is short-tempered, bloodthirsty, and eager to claim glory for his name. For that, he chooses to leave his wife on his home island to seek riches and land on a faraway forest, as the lord of his House receives a proposal to rule it. It happens that on this journey he and his crewmen will encounter challenges never faced before by his seafaring people: wood imps, vengeful spirits, fabled curses and man-eating giant creatures with the power to rival gods. And all the while surviving those things, they will also have to deal with the natives of those strange lands. So yeah, there will be battles, lots of it.

The protagonist and his folk all have a very viking-like feeling to them. They felt to me like a mix of spartans greek warriors and nordic vikings. As for the forest dwellers, they felt like celtics with more advanced blacksmithing knowledge, as they employ those to make heavy armor and weapons. The creatures felt like something out of The Witcher or Berserk. Nasty, cruel and smelly.

As you may have realized, that is where the novel shines: worldbuilding. There are many different countries, ethnicities, past rivalries, legends, and traditions that are slowly introduced to us, the readers. In a way, it feels like reading a real, printed, fantasy novel. If you like this kind of thing, you should also give it a try.

The grammar is good. It is not perfect, as there are a few errors (like switching 'were' for 'was' in some places). Nothing a future re-read from the author can't easily solve, I believe.

As for the main problems with the novel, I would say they lie on some strange narrative choices. First of all, as much as the author describes the world around the characters and the creatures they encounter, there is a lot of obvious things he seems to miss. Like, the main character, for example, we are almost never given an accurate description of him (his age? his hair color? His build? His voice? The feel his presence gives to the others around him?). As another example, the passage of time as well is not depicted clearly. Just saying how long someone takes to do something feels lacking. It is not enough to say that 'the warriors took 10 days to travel from here to there' when they are traveling through an extremely dangerous place, from which it was said that no one ever returned. A deeper description of those things is required. What did they see there? Was that part of the forest any different from the rest? How did they light fires? Did they set guards during the night? Could they sleep, knowing the danger they were facing? Those things give flesh to the story and make us value more the courage of the protagonist in going through with it. When things go wrong as well, it will impact us more. As it is, I have even completely lost track of the time passed in the story (for how long has Crewslayer and company left Isary? Months? Years? The chapters sometimes jump from one place and time to another, and frequently you can see that at least months have passed, although it is not depicted how long).

There is also a few odd turns of phrases. Something like 'Slashed, turned and said to them Crewslayer'. It is not wrong, and we get that it was Crewslayer who did those things, but it feels a little strange sometimes. Feels like a problem with translation, idk.

And lastly, the characters. The only character that is really defined is the main protagonist, Crewslayer (and maybe his father, by the interludes?). The rest of them have some defined traits but don't really give the feeling of depth. It could be good to spend some chapters exploring them a little.

Last, but not least, I would like to compliment the author on his frequency with updates and concern with his releases. You seem to take things seriously and I congratulate you. I think if you keep improving this novel can become really, really great.

An adventure through a dark harsh world.

This is more close to normal fantasy than most stories you can find on this site, also a kind of different start.

A normal fantasy adventure, it follows our protagnist, a warrior seeking glory, fame in a world with many dangers, beasts in the sea, great monsters in the forest, other humans. This is a story of many battles.

Noticed that there are some weird sentences where some words are missing from, aside from that, this book is well written.

I hope not otherwise It's gonna be boring.

Seamen go fighting inland for glory and gold, slaying all manner of men and abominations all together. plot is solid with good amount of forshadowing and intrigue, though the end goal isn't known yet It's progressing nicely. NO Inconsistencies so far (All praise Mahandahy), also Author is exceptionally great at describing and strategizing battle scenes, these I look forward to every chapter (you hear that author). If I have any gripe It would be that chapters became shorter, It started out of adequate length then became really short.

Seamen have much in common with the Vikings (only watched the series) raiding each other, seeking glory and spoils, ever loyal to their masters, fighting maniacs. mc is well done and explored for now, got his good and bad points , but side characters are a bit lacking either Abhyndar (or whatever his name, you can't expect me to remember these names) his first friend in the crew nor their lord only siatmon is a bit read on, We're still early in the story though.

I got nothing on grammar not native but there wasn't a moment where I confused something or stoped reading to understand something so that's all I care about.

you should try reading.

Author please do a poll of wether you should do longer or short chapters, personally I prefer longer.

Thanks for writing and keep'em comin'