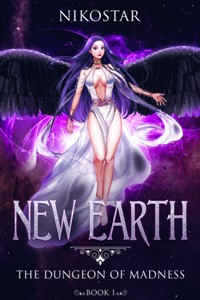 New Earth- The Dungeon of Madness

After being betrayed, framed and kicked down to the ground, our protagonist was sentenced to life imprisonment. But a few days later, a global disaster occurred, people from all nations migrated to underground refuges.

As a prisoner, he thought his life was over, abandoned by everyone. However, he wakes up, greeted by Gaia, the person responsible for New Earth.

New Earth was a second chance for him, watch as he builds up his own dungeon and become known by all as the Emperor of Madness.

The title is currently a Lie

The story has a severe lack of madness, and dungeon building by the MC. The first 34 chapters were spent in the training dungeon, with nothing much taking place til the last 5 chapters.

Also the MC's actions don't match his backstory. Betrayed by his former friends which he loves to complain about, but trust the first monster he comes across. Where are the trust issues?

I started this story not expecting a dark story based on the tags, but I did expect a mad dungeon master out for revenge. Instead we get an unhappy MC who refuses to be a dungeon master.

At this point in the story you won't get what you expect based in the title and synopsis.

okay read with some issues

'The Dungeon of Madness' tells the story of a convict that gets a new chance by, as a dungeon, being an antagonist in a VR-MMORPG. After a training period he is sent out and establishes his dungeon in a lucrative location. He does not have much time before the first true challenge arrives.

Style: Told in third-person internal style mostly by the protagonist 'Five' but there have been a small number of other people introduced that way. In many parts the writing style feels a bit ungraceful.

Story: The story is both about the dungeon core's human form and his dungeon. Because of the training period the dungeon is established quite late in the story (chapter 44). The pacing is fine.

Grammar: Often there are run-on sentences that are unwieldy and sometimes even plain wrong. The rest is medium.

Character: Some contradictions in how the protagonist is presented versus how he acts. The characters' motives are often one-dimensional and some behave quite stupid (another reviewer used the term "wuxia nonsense" and I concur).

All in all a nice read but not great literature.

Not good. Lots of verbal diarrhea

Written by someone who loves wuxia and xianxia characters. From the characters act and speak, its very similar to bad wuxias.

"Our baron is coming here shortly, you'd best step aside!"

"This man is clearly stronger than me, but i cant lose face!"

"If you wont join my faction, then ill just have to deal with you!"

And so much more generic wuxia nonsense.

Reviewed at: Chapter 82: A new companion

Longer version (as of chapter 82):

The story has two major weaknesses: characterization and plot. The characters are all described as being one thing, while being shown to be multiple other, incapatible things. This is not intentional. The author simply can't see the conflict because they have no understanding of what the words they have written about the characters' personalities and motivations actually mean.

The main driver of these numerous discrepencies is the so called "plot", which is just a series of poorly tied together cliches that the author doesn't really understand either. They're playing connect the dots and not caring if the dots should even be connected, or if they miss vital dots along the way. The whole thing is a trainwreck, and I'm tired of wasting my time on it.

O, and the MC also really, really sucks at being a dungeon core, or using his brain in general. For those of you that would be willing to look passed the other things if that part was well done, know that it definitely isn't.

This story was really good until the end of the first arc. And then it rapidly took a nosedive due to a completely out of character decision by the main character.

The mc had just come out of a high risk situation with massive profits, but then what does he do? Abandons the people that came with him in good faith for supposed "freedom" and goes along on his way.

Will follow along for a few chapters more and see whether the story improves or stays the same.

Keep going, never stop writing :) there is too few dungeon story writers who finsh what they are working on.. also the lack off long dungeon storys.

I really love this! The only problem is the grammar. Though you improved a lot compared to the first chapters. Your writing is amazing, really. Maybe you should pace the events and everything would be better.

Best of the wishes and hope you keep on writing!

So Far so Good

I am enjoying the story.

Your grammer and spelling are on point and your characters feel alive.

my only gripe is that you used the Sci-Fi Tag. Unless you are planning on having a lot more outside interaction it really doesn't fit.

I read the first 10 chapters today and I enjoyed it very much. The existing characters seem realistic enough to have real thoughts and aspirations. The world in general appears rather intriguing as well. I am looking forward to what's to come.

Happy to have you here Nikostar ^^