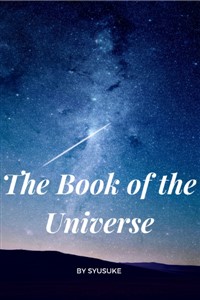 The Book of the Universe

Before existence itself, there was a single entity, with its powers it split into two as one exploded to become the universe and the other at its center in the form of a book. Known as The Book of the Universe which records and contains all the knowledge and secrets that ever existed.

Follow Long Yu, a intelligent modern youth as he explores this foreign world, as he uses The Book of Universe to hilariously tramples geniuses, obtain the greatest treasures and captures the hearts of countless heavenly beauties.

Plot hole madness with a slice of bad grammar.

by NightHeretic Tuesday, November 20, 2018 11:06:01 PM
To begin with this story was very hard for me to read. I felt like the premises was bound to not work out. A book of the universe? Come on, you couldn't have expected anyone to pull that off. And I went into the story, knowing it wouldn't be amazing. Even with that, its hard to read.
Plot holes everywhere. The main character's book is able to tell him anything in the universe, but wait, no it can't actually. That's basically what is told in the beginning of the story. Along with how somebody split themselves to create an entire universe, and the book of the universe. But nooo this information is too much for the main character to comprehend. Even with him supposedly being a 'genius'. Problem with this? A toddler could understand this information. But no, not our main character, wouldn't want to overload our super genius with a Divine soul. Apparently our main character is also naive enough to believe anything and everything that is told to him, without the slightest bit of skepticism. Mhm, not shitting you. Mr.book here says he is the greatest treasure in the universe. And our main character? Oh, you guessed it. He believed him without the slightest hesitation. Anything he told him after, without the book showing him ANY of his powers, was believed without any question. Altogether the main character appears extremely immature and childish.

Our story trys a hand in comedy. Thing is though, I didn't laugh at any of the 'funny scenes'. They just always came out as retarded and childish. The main character is naked so he goes and finds a bush to cover himself up. The narrator then proceeds to talk about the main characters ass. Mhm, that's nice to know. After this we have the main character running through the forest, continuously hitting trees and falling on his ass. Yes the 'narrator' talks about his ass in this instance as well. I don't know what the deal is with him and asses, nor do I really want to know.

Character interaction isn't terrible, but isn't really good either. I've seen worse. Wasn't bad enough that I got confused during it. But it wasn't good enough to redeem the story.

Finally grammar. There are so many incosistences in this story with its grammar, that you can tell it's never been proofread. The story has probably no single paragraph that has no grammatical error. Some sentences are impossible to understand due to the wording in them. Many spelling errors occur, he doesn't seem to like the word your, or the letter s. Because he seems to leave them out quite often. Your becomes you, and s? Well he just seemed to forget that letter needs to go at the end of plural words most of the time. There also doesn't seem to be the knowledge of how to differ between commas and periods. It's one of the main problems in this story. Sometimes there will be commas where periods should be, or perhaps the existence of commas is forgotten altogether.

The story honestly isn't worth reading during this stage (chapter 31). If the author goes through proofreads, and then covers the plot holes, I may give it another try.

Also I don't know why those show things are there. They seemed to just pop into existence, can't remove them.

I just every once in a while want to read a story about an extremely OP main character and this story is like that. This story has good grammar and everything and the book thingy he has is a very interesting and enjoyable concept. I recommend this book but if you want a story with a struggle this story so far does not have that so don't go in with expectations that will leave you disappointed.

To the author I just want to say good job so far and I hope you enjoy writing the rest of this story.

It's Just fun to read this story, i like it for this continue writing it's a good pass-timer <3

It’s really enjoyable and is one of the best I’ve seen in a while.

It’s like N1UH but he just started his cultivation journey instead of him already being the strongest.

Keep it up and update chapters faster please