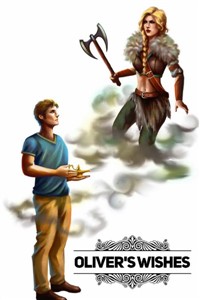 My name is Oliver Pettini, and I am the owner of the most dangerous technological artifact in existence, or maybe it's magical, I haven't figured that part out yet.

Last week I had an IQ so low that I sometimes forgot how to get home, and could barely stumble through sentences. This week I am the owner of the most advanced space station in the known universe and I wield powers that can alter reality itself. If I have the energy that my power is dependent upon... You see I get more energy every day, it's a set amount. I can stockpile it or burn it all up on one giant "upgrade" as I like to call it. This power comes from one of the wishes I made, yes, on a magical genie's lamp. I know that sounds crazy.

So what do a Viking woman from 800AD, a U.S. Army combat veteran, and a fat gaming nerd have in common? Well, they're my team, and if I can save up enough energy I can use my new power to give them superpowers of their own. That's the plan at least. The problem with my plan is that I have some shadow organization looking for me. They'll kill me, my family, my friends, and everyone I have ever loved to get the lamp. What do they want? As far as I can tell they want to rewrite our universe into some kind of communist paradise where freewill comes second to safety and the government.

I have to find some way to keep the lamp from the organization going after it that involves more than just hiding up in my space station. I refuse to be a hermit coward. I also have an ingrained need to help people, and now I have the power to do that. I have more resources at my disposal than any law enforcement agency on earth, and a team of people willing to help me.

I want to be a hero, but I have no idea what I'm doing. Did I mention I was a barely functioning idiot last week?

P.S. I'll be posting new content every other day.

I've taken "The Pledge" which I'm sure will make a lot of you happy. It basically means I promise to finish any story I start within a timely manner. You can learn more about it here.

I loved this book and its adventure. It was so good. I can not wait for another one.

Always raising up the bar! Keep it going you'll be a great writter.

Just What ive been looking for

this book is very interesting and i cannot put it down. It seems as if alot of hard work was put into it.

Really good. It's hard not to binge read it. Sadly Oliver is not using his stuff for it's full potential. (doesn't even try) Some decisions and interaction feel forced and utterly stupid. But hey it's a really good story and you wont stop reading once you started.

RR wont let me leave the title I want to leave....

Needs more character interaction so I have to give you a 4.5 out of 5, but other than that it is perfect!

Very original idea, the grammar is a 4.9/5 right now, but you could easily fix that so I wont hold it against you.

Overall found this piece of work thrilling and engagin from start to finish. really out done themselves with this one and i am looking forward to the next.

this book is amazing!

Should I keep reading in installments or just wait to buy the book? It is a great premise, I look forward to finishing it.

Too rushed at the end

Review after Epilogue of Book 1

So the idea of this book is great and the first 10ish chapters really made me look forward to the rest of the story and right then i would've given the story a solid 4.

But now i've read the rest of Book 1 and i have to say that somewhere along the line the story lost me.

To get this out of the way the grammar is excellent for RRL and the style is about average for an experienced author.

The characters in this book aren't that generic in general terms when it comes to "superhero" stories, atleast the MC is a refreshing new template that the author builds upon. The rest of the main cast isn't really new ( with the exception of Astrid in the beginning ) but the author manages to give them a little twist to make the characters interesting enough. Although i have to point out that by the end of book 1 the characters lost a lot of their appeal to me.

Sadly the character development is quite flat in most cases if existent at all and that becomes apparent in the later half of the book, where the only character that actually develops is our MC and even his development isn't done well in my opinion.

My main gripe with the character development is the lack of depth to their development, the characters do get over their issues and develop socially and emotionally but all those developments feel shallow and barely scratch the surface of what i would think of as the complexity of a humans mentality.

Another point that irks me is that somehow the characters throw common sense out of the windows halfway into the story like inviting people onto their spacestation and stuff, that is just not what you do as a thinking person.

Now the story is what i really don't like for a couple of reasons.

And while i can live with shallow character development and stupid character decisions, i just can't live with them when they feel like a plot device.

And here is where the book / story gets bad really fast, if you look at the decisions that led to the events that happen in the second half of the book, almost every single decision that had a negative impact on the group of the MC feels forced to me.

Just to give a feeling for what i'm talking about i will use the decision of inviting research companies to the space station.

That idea in itself is not bad, but if you consider the situation the MC and his group are in it just becomes incomprehensible how anybody would agree to that plan. To list out why i think that was just utterly stupid and a plain plot device here's a list:

- They went onto that space station to HIDE from said organization

Just to name the main points that make this decision really really stupid.

Another example would be the "final" showdown between the organization and our ragtag MC group.

The MC has spent WEEKS reading up on his space station and the space station repositioned itself earlier in the story along the geosynchronous orbit.

Now rocketdrills are approaching the space station and NO ONE even thinks about just firing the thrusters and altering their orbit.

Manouvering in space is a very hard thing to do and the smallest manouvers have a large impact on the orbit of an object. If the approaching vessels don't have extremely powerful thrusters the space station could evade those vessels by simply slowing down or increasing their speed.

There are a few more instances where the decisions that are made by the MC and his group are stupid to borderline suicidal and it's those moments that ruin the story for me.

All said and done this could have been a real gem if the author had taken more time for the letter half of the book and atleast tried to construct a logical plot. It still is a decent read as it is right now, but there is a lot of lost potential on this one.