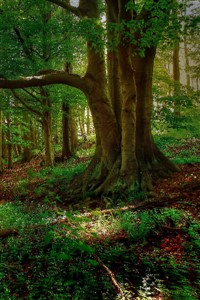 After a couple of mysterious happenings on earth, Peter suddenly gets teleported into a weird forest filled with danger. Meanwhile Timothy, the creator of a new world, slowly grows mad.

Writer here:
I wrote a couple of chapters for a project of mine, just posting here for critique. Hate it, love it? Please leave a comment or review.
The first few chapters can be pretty peculiar, however please bear with it.

It's a nice idea

Reviewed at: Chapter 5: Peter and the Wolf

The ability to have creation but to never have the ability to destroy ever again. It's a fabulous idea that I can only be saddend by. A shame it never got to reach its potential. I feel as if it would have ranked high if it had. The ideas for this one were great.

Style might be on the eh side of things, but it's better than most fictions on this site. Nothing to complain about in that regard. Grammar might need some touch-ups though, if the author was still working on this one.

The style is good and easy to read. I take a star out because of  the following :

•Some of the chapters have different pov but there is no indication to differentiate, which makes it a bit confused. For example when you changed from Timothy's to the old man's in the first chapter.

•Also there is no indication to show a break in the time flow which is really confusing, at least to me. For instance when he lost consciousness and was captured by the goblins. You just started a conversation between him and Raul in the next paragraph. At least a header or a simple dash in between would have been helpful.

The story is a good start but it lacks enough plot twist to hook the readers and at least differentiate itself. Though a part of the system is a bit common, it's still an enjoyable read.

No problem here. Some few errors here and there but nothing to disrupt the reader.

The characters are still developing and it's very early to say how far they would go. But though they feel real they lack some qualities. For example their reactions to the world transportation thing, they should be affected much more than that. I mean it isn't as if they don't like their previous lives on earth.

NB: Anyways, I think it's a good story and you should continue and make it great. Even if it's just one short chapter a week. Thanks for the chapters

This review is written as of completing chapter 10.

The story has an interesting and original start, but quickly devolves into your typical litrpg, aka more system interraction than story line. Despite the quests being created from the MC’s needs, it feels as if the system is driving the plot.

The style is on point. Not much else to say.

No grammatical errors as far as I can see, but sentence structure is a bit repetitive, making reading it a bit annoying.

Characters are unappealing. That may just be me, however (there is quite a bit of development).

Overall, a decent read. Much better than most because the author clearly has talent for writing.