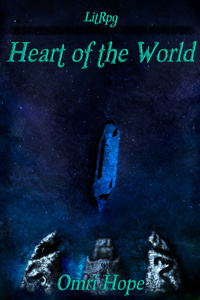 Heart of the World (LitRPG)

This is the story of how I stabbed a bear.

Well... technically speaking, that became the moment my life went into a vastly different direction, all on my way to 'The Mission'. The one I had been given alongside two other seasoned players. To help people in a world with a world.

Don't get me started on that. So, apart from that, here is the gist of the other part. I'm a year long employee. Though, several years before I became an employee of theirs, this crazy ensuing madness of a Full Dive battle royale between even more companies started to boil over to a breaking point. Mine thought to search for something that would truly blow the competition out of the water. Well, they found it. Deep under the sea actually. They called it a game changer. Rumors abounded of course. But the most common knowledge became that it was a power source unlike the world had ever seen. However, I can tell you now, the unknown sometimes bump back. Especially when experimenting on highly unknown elements. Still, years safely went by and thus I became a developer there.

Now, what does any of this got to do with stabbing a bear? Well, ask them that! They started it all. I'm new remember! Though, chaos ensued, and well, I was there. It probably helped that I had proven myself a good fighter in game and that I had some knowledge that could help with the triplets. Oh, but my sister would box my ears if she ever realized how little time I spent learning what the other developers created in the game before I had to go in there on, 'The Mission.'

So, this is a story of a mission to save the people in Realm of Ancients. Not those rookies! Oh no, that was just a precurser.

AND THERE WAS THE BEAR!

Sorry, I had trouble getting over it. But that specific moment changed things.

Hi! This is a project I have started for the fun.

This is not your typical comedy. Yes, I added quite a bit humour to the story, BUT as things go into the eye of the storm the character will face challenges that hits him down. So it is not comedy in every chapter. But what do they say, when you've hit bottom, only way to go is up! :D

I am always open to suggestions that might take the story to new heights, so you all are welcome to discuss the story in the comments. Just remember the all important SPOILER tags. ;)

I'd truly appreciate if you rate the story and leave reviews as we go. ;)