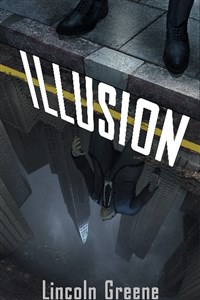 Hello everyone, I have taken down Illusion, as I have now published the book and cannot keep more than 10% of it posted anywhere else.  Thank you everyone for all the reads and comments.  I hope you all enjoy the finished product!

Amongst the best stories on this site.

I don't often leave these kinds of advanced reviews, but I like to think that when I do, it is well deserved.

This story is a great LitRPG, especially when you look at what is often the norm for LitRPG stories here on RoyalRoad and on other sites. This story in my opinions soars way over 95% of the LitRPG stories on this site and those on the internet as a whole.

Style: Nothing particularly interesting to say I think. It's good, nothing that irked me personally. It reads very pleasantly and the author does not like using cliffhangers, which is a big plus in my opinion. You can read this story and feel content with how it ended.

Grammar: English is not my native language, but I like to think myself as being fairly well versed in it. I can say with certainty that the grammar is definitely good enough that you will need to put a lot of effort in finding vocabulary mistakes and major grammar mistakes. I am not a master in the English language, but I can say with certainty the grammar is more than good enough.

Story: Very, very good. The MC and his companions all have their own worries that drive them forth. Whilst the real world isn't really explored a lot, I personally find it to be explored just enough to make the reader care about it. I very much understood Kurt's real life problems with his parents and I think readers who have been in a similar situation know exactly how heavy of a weight those problems can throw upon a person. Though Kurt's real life problems aren't often referred to, I never forgot they existed and neither did Kurt.

This is a normal LitRPG, meaning that the characters don't have to worry about dying, they don't even stand to lose a lot in terms of equipment and/or experience in most cases. At first the game is nothing more than a way for Kurt, our main character (MC) to reconnect with his friend Jimmy whom he had to leave behind for college and to get his mind off of the fact he dropped out of college.

Jimmy is stuck in a wheelchair for life, because he can't pay for his surgery and likely never will, so for him the virtual reality is a place where he can walk around without a wheelchair. Jimmy never once thoughout the story really laments the fact he's in a wheelchair and is merely glad to have his best friend back.

The first part of the story is just them having some fun with the game and befriending a rather famous player inside the game called Gadot. She is the best racer in the game and the leader of the secretive in-game organization calld the Lace who have made it their mission to take down Goonstorm. A faction that has grown excessively powerful inside the game to the point that they threaten to gain a monopoly over the game.

For the most part this story is just some people having a good time and trying to weaken Goonstorm to keep the game fun. By no means is this boring, I guarantee that there is plenty of mayhem and awesome moments to be had in this part of the story. However near the end of the story, the game does offer them opportunities to improve their lives in the real world for which they have to fight tooth and nail.

There's a bit for everyone here; action, planning, faction mechanics, alliances and a lot of awesomness in general.

Characters: I am not going to go too deep into this as it can quickly lead to spoilers, but these characters are all in all well written. You can't say people are overpowered (OP) and that they simply luck victories into existence. Gadot is an absolute nightmare if you're a pursuer, but then again she is the best racer in the game. She maxed out driving related skills and has plenty of in-game money to buy the best cars with the best upgrades, so her being a good driver is not really a surprise.

She can handle herself in a fight, but you can definitely see she has a lot more trouble in a fight than say Jimmy, who is the combat specialist of their little group. Kurt is a bit unqiue; on one hand you can say well this guy is a relative newbie and he's keeping up with the best, on the other hand though it is important to look at his combat style. Kurt is not somebody who plays 'fair', he uses stealth and gadgets to even the score with his more experienced opponents and better equipped opponents. Is that OP? I personally think not, he's just using his smarts and his teammates also support him quite a bit.

It's also important to note that in this game even top rank players can be taken out relatively easy due to the nature of the game. A single well-placed shot could do the trick. The game is very much equipment based, rather than based on the level of your character.

The only thing I am sort of sad about is that most of the special abilities in the game were used by the protagonists. Jimbo is the only antagonist I can think of that has shown a unique ability, though to be fair this in turn is also realistic. Our protagonists really aren't that big of a threat throughout this whole story to Goonstorm or the Ursa (the other major faction), so it also makes sense that these guys didn't send mini-boss level players after our protagonists.

Also the Pirates...those guys are just awesome. I would tell more about the Pirates as a faction, but that would go into spoiler territory. The stuff these guys do throughout the story is just nothing short than bringing pure epic mayhem.

I would definitely recommend that you read this story.

Really like this story. It's an unique story here on RoyalRoadl and well writen. Can't wait for the next chapters.

So much to like about this. Great story especially if you're like me, and burnt yourself out on fantasy litrpg. Does a really good job weaving just enough game elements to keep it interesting. All without bogging it down with half page stat sheets and nonsensical percentages.  The action scenes are vivid and exciting, and somehow not game breaking. The characters could use some fleshing out, but are still fun and engaging. All things considered one of the best I've read on RR.

I like it please keep writing this amazing story!

It is truly an enticing story, one of the best I have read in this site. The grammar is not perfet, but really close to it.