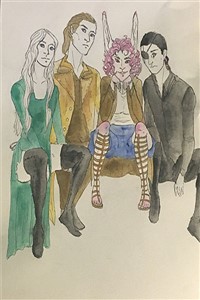 The Demon Lord is Bored

What happens when the Demon Lord Erebus gets bored of being a Demon Lord? Well... he decides to become a Quester. Along with his sadistic demon friend Vyne and masochistic 'love-interest' Tear, Erebus explores the world he hasn't experienced for five hundred years. Because why not? DROPPED.

I read up to chapter 23 before making this review.

The chapters were very short which normally takes away from the story. But this story does it quite well and doesn’t use any painful cliffhangers. Most of the chapters are dialogue and descriptions which makes it feel like a play. It contains some comedic scenes but maintains more of a laidback feeling with some serious moments so it’s not a comedy. My only complaint is that there isn’t enough descriptions. Descriptions are kept very basic which makes it hard to visualize things.

A few inconsistencies here and there like Erebus  being the fourth seat of the council then he’s suddenly the sixth later on. The storyline itself isn’t very original as many other stories have explored the concept of the demon lord becoming an adventurer or teaming up with the hero. But it’s unique in how Erebus isn’t actually a demon lord and demon lords are common with even stronger versions in existence. Plus the fact that Erebus and his minions don’t care about others and barely hesitate to kill humans. Even if those humans traveled with them and were semi-friends with them. It’s also unique how Erebus takes more of an interest in the quests and dungeons than the actual “Questers”. Overall a fresh take on a well-explored storyline.

I recommend creating some notes somewhere about basic things so you can avoid plotholes without reading through your entire fiction several times. Just basic stuff like names, positions, basic descriptions, basic personality, etc.

Throughout the story I found only minor spelling, grammar, and conjugation errors. The spelling errors are mainly just words that are missing a letter, like “ace” instead of “mace” or “ake” instead of “make”. The grammar errors are predominantly semantic errors like “…Tear stayed in her bed. Even though, they both very much wanted to.” which should be “…Tear didn’t sneak into Erebus’ bed…”. In regards to the conjugation errors, the story is in past tense and that’s fine but there’s some parts where it would make more sense to be in present tense. Conjugation is much harder than other things so I won’t take off any points for it.

I recommend getting a proofreader to just read through the chapters quickly to find small mistakes. The grammar is high without doing so but most of the mistakes could be easily prevented by someone else reading through.

The main characters all have set personalities and act upon them. They don’t usually stray too far from their personality which is a good thing. For example: Erebus is a selfish, laidback, and arrogant dragon so he doesn’t care about his friendship with Heather and kills her without remorse. My only complaint about the characterization is that it focuses on their personalities and barely mentions their looks. We get like one adjective to describe clothes and nothing else but a side note about how it’s different from their usual clothes or how revealing it is. Describing their actual looks isn’t that much better, we know that Erebus looks like he’s 20 and is wimpy-looking but not much else. Also I hope to see their personalities start to change in reaction to events later on(aka dynamic characterization).

Character descriptions seem to get better in chapter 23, still should go back and make more in previous chapters.

A decent fiction with plenty of potential to grow into a great story. It only has a few minor drawbacks to it but the fiction is still in its beginning stages. The chapters are short but enjoyable to read and all the chapters can be read in less than 2 hours. So far there only seems to be one minor plothole and the grammar is extremely good for an amateur fiction.

P.S. there happens to be a manhua called “The Devil King Is Bored”. The name is quite similar to this fiction’s name. Did this manhua perhaps inspire this fiction or is that just a coincidence?

I'm revising my review but this damn site won't let me remove the old one! Anyway, it's as I said in my other post:

It reads a bit like an anime, but in this case that’s not a bad thing. I thoroughly enjoyed it and will be reading more. The grammar isn’t always perfect and for that it lost half a star, but the story and characters are so interesting and strong that it doesn’t matter. And if I’m saying that then you KNOW this must be good.

I'll add that I went ahead and gave it a full four stars because I realized I could express the so-so grammar in the advanced part. I feel much better about this version.

I definitely recommend this FF for everyone to read. It has good grammar and the story is pretty original. I'be really enjoyed reading. Keep up the good work.   t (^-^)

A fun read to lazily pass the day

This novel is more for those who like the after ever after of the hero and the demon lord, and this is regardless of whoever won.

Personally I love it, I’ve seen A few like this, but honestly speaking its fun to read.  I love these types of novels, you don’t need some complicated goal, nor do you need reasoning; after all your bored, and he’s just winging it.

Though this really isn’t something I recommend for those who do not like OP MC.  Especially since their “ratings” as to what’s op is quite sensitive to most palate of what people’s standards are able to withstand.

I will say though that I do look forward to what you come up with next.

Also, I almost forgot don’t forget to add spacing in your paragraphs, people tend to jump off the cliff cause of that.

I\'m f--king mad this series ended, we never got to see where that dungeon took us, or who \"the guardian\" that made Erebus fell sorrow.

Definitely recommend reading- the story is simple, yet entertaining and holds promise. The characters are quirky and are being fleshed out nicely. Erebus is the best.

Why doesn't this have more views?!

I really enjoy this fic, read 47 chapter in one go and since then have read it weekly or whenever a new chapter is released. Characters are entertaining and their antics can be pretty funny. Flaws are minimal and I just don't understand why it isn't as popular :/ I would go as far as say it is one of the best story's I have read on RRL. Keep up the good work!

This story is pretty good if one is looking to kill time. No great evil to destroy the world, no hero rival trying to stop you, just the demon lord doing stuff to pass time.

better than i expected

great story. although the character is op it isnt to over the top. the setup of the story so far makes it seem like the op dosnt even matter at all. i was thrown off at first because it had the same name as that webtoon so i thought it was gona be a ripoff of it. however i was glady wrong.  orignal spin on a the demon lord archetype story. best part is the fast chapter releases. due to the fact chapters come out like every day i would say this should be around the number 3 spot. very few grammer mistakes and story flows very nice. although first chapter wasnt supper catchy after the third chapter you will be hooked.