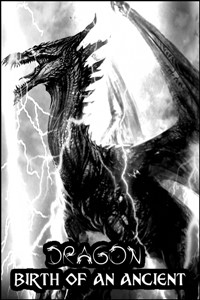 Dragon: Birth of an Ancient

Deep in a secluded forest, within the depths of a long forgotten cave, an unnatural silence that has reigned for little over a million years is shattered as a hatchling takes its first breath. To the various species that called this world, one of seven, home, the matter seemed beyond insignificant.

The hatchling, like all monsters, had no divine backing and with its age, could only be considered a lesser existence. A being to be used by the Chosen and noble monster bloodlines in their never-ending pursuit of power, fame and immortality.

However, how could any of the short-lived races, Chosen and Monster alike, know that the tiny, weak, lizard-like creature was much more than it seemed. That it was an entity only spoken of in myth and legend. From a species that their ancestors, with the backing of the Gods, paid a huge price to remove. A heretical existence that threatened the fragile peace that had descended upon their world.

I am writing this story for a friend who is currently in hospital and in a very precarious situation. He gave me the plot/ concept and, after my own health issues, I wanted to try and brighten his day and provide a distraction from the monotony of their hospital stay.

I am posting it on RRL mainly in case anyone else can find enjoyment from the story and to show the readers of my other stories that I am not permanently MIA (and will 100% return to those stories in the future).

Well I just read through this entire thing. I have to say I'm somewhat disappointed.

While it's too early to judge a lot of elements of the story I can say one definite thing. It's not written well. Not as in, the story or grammar is bad. As in the way it's written is just... not good.

The reason for this is simple. There's too much beating around the bush where it isn't needed. Too much goes into setting things up to the point where it just gets tedious or repetetive to read. I noticed at one point the same thing repeated three times in different wording with almost nothing new being implied through it. It just was hard to get through.

The first three chapters (The Storm, The Cave, The Dragoness) could have been a single prologue. In fact I feel like they should have been. There was too much back and forth between the mother of our eventual main character and her enemies. Yes we get it. Dragons are enticing. These guys are evil. They have a hard-on for enslaving her and her egg. I feel like I read that at least five times over the course of the should-have-been prologue. The way the story is written, I wouldn't be surprised if I did.

The rest of the whole thing is interesting. Not very original, but that never really gets to me honestly. Something can be unoriginal and do whatever it's doing well and I wouldn't give a damn how many times I've read similar stuff before because if it's executed well it'll still be entertaining. As it is, this is brought down way too much by its poor pacing. I couldn't honestly be interested in anything that was going on because of it and everything else is just too difficult to judge by itself wih it.

Here's the thing. I can see the competence here. I can see how this could be good if scenes that should last a paragraph didn't last ten. I can imagine it, somehow rewritten in my head, more compact and more meaningful for it, being really enjoyable to read.

As for advice on how to get there. When writing something, think of what you want your readers to take from it. And don't repeat it much if at all. Be subtle sometimes. Think where you should give more details and where you should give less. For example. The first three chapters didn't need to be as detailed as you made them. It could have been just as effective, if not more, if you had described the whole thing in less detailed events shrouded in the mist of time. The main character is, after all, the dragones' child, not her and when I read the synopsys I was not expecting to be in for like nine parts of her adventure first.

Just as some examples of how you could have done the whole thing. You could have mentioned in passing or in the monologue of the villain why they didn't just collapse the mountain on her, if using the monologue that would have also served to describe their goals in chasing her. If you didn't want to make him cliche like that you could have had the dragoness just scoff at his "reasonability" that he didn't collapse the mountain on her in her mind, since she knows they would only want to take her alive for their benefits and because they're greedy. There's no need to repeat any of that more than once. The average reader would be able to take the suggestion without bashing him over the head with it. But I hope this helps. And I hope you don't take this too harshly.

Probably written by a dragon.

The intro sucks ya in.

The rightfully proud young dragon pulls ya in deeper.

Barring the occasional error and utter sadness of haitus status I cannot complain.

Would ya accept firstborn as payment to poke this beauty again?

Just read all available chapters in one go and I am loving it! (41 as of now)

(Reviewed as of the end of the book so far) while unfortunately on hiatus this book was very unique and exciting, I particularly liked how what a dragon utilized during childhood was emphasized during adulthood, we didn’t see much of this in action as the MC doesn’t change much because of it but it was still interesting

Exactly like the title it is a good book so far (at the end of Woad's Folly) but the beginning chapters feel rather bad for some reason even though it improves massively later on, plus MC is not super OP which is always a positive.

This story is very well written, and the story is very interesting and engaging. The characters are well made, and you can understand what their goals are, and how they view what is happening. But the author hasn't touched it in 2 years. He left it at a random point. I will give 4 stars, and politely ask that the author return to this story. Thank you.

I have enjoyed the sotry so far, the concept is original (for me I dont know if there are others) and quite interesting. There are a few grammatical mistakes but it doesnt detract from the story. Characters are for the most part pretty good.

Again it has a nice read though it hasnt been updated for 12 months, I hope the writer (Skada88) would get over it sooner.

Grammar is dope, I do occasionally see double sentences worded differently, but it doesn't distract from the story.

World is still being built as we read.

I can't wait for the next chapters! I'm pretty excited! Keep up the good work Skada!

First of all, the plot is intriguing though a little overloaded on seemingly unnecessary details. I'd recommend cutting most of the early chapters which have no real relevance to the story. A person who started reading with chapter 5 will probably have the same understanding of the plot as someone who started with chapter 1. That being said, a bumpy start isn’t everything and the plot gets better quite quickly after that.

The grammar is amazing when compared to this site's average, with errors rarely impacting the flow of the story.

The characters still seem to be in development. The main character's personality seems to change way too fast because of him receiving memories, and none of the other characters are much more than cardboard cut-outs yet. Not to say that they are badly done characters, but I'd prefer to see more developed, recurring characters compared to a constantly changing cast that only gets a chapter or two of screen time.

All things considered, I think that this story is worth the read, and I'll definitely be watching its progress.

Also there are dragons and I like dragons 5 stars.