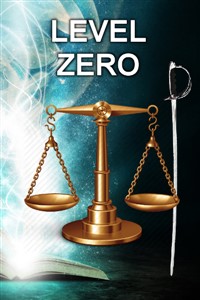 Walter Alvis, all around video game addict, finds himself magically summoned into a fantasy world. To his dismay he discovers that, unlike in his run-away imagination, he is completely helpless as a, "Level: Zero." Now he has to find a way to get along with the knight and Paladin-select, Elin Folcey, while at the same time desperately surviving by his wits.

The Concept is interesting but it's also Jarring

I'm going to be brief here and say that I like just about everything in this story except for the scale gimmick. Every time the story feels like it's about to kick off this gimmick is used and it throws off the pacing and tone. It feels like you're watching an anime that has a really good plot, but every few chapters someone decides to change it into an ecchi anime.

It may be a plot point, but it's annoying as hell and detracts from the story every time it comes up. I feel like it could be used to comedic effect, but it's too mind-altering and too much of a major plot point to do so. Once the gimmick was explained I felt like one of them was going to kill the other to get out of the spell. Honestly, I would have preferred it.

Edit: Having reading farther in it's much more of the same, unfortunately. It feels like it's devolving from its interesting opening into a slice of life like Death March. The plots still there but it's slow-moving and with the chapter size I don't feel like it will go anywhere for a while.

If it keeps up like this I'll probably stop reading and adjust my review accordingly.

Edit #2: I gave this about gave more chapters and it was more of the same. The world and overall story were interesting but the forced romance just ruined it for me. It was like the main characters were actual people until any type of romance came along whatsoever. No one would act like Walter in this situation let alone a computer programmer like him. It's like when this was written the original idea was to have a powertrip but it ended up as half a good story mixed with forced romance.

All of the roots of that type of story are there but every time one is revealed it's ignored for something else. Overall I feel like a certain audience can find enjoyment in this, but it requires a suspension of belief on a few major plot points and characters to do so.

I feel like the story would have benefitted if the romance wasn't there or bettered developed beyond "Magic Muggfin and plot! Boom make babies!" The stuff to do it is there, but in the end, it feels really forced and almost disgusting when looked upon in the context of what is actually happening.

I'll still give it three stars because it's enjoyable to an extent, and it's up to snuff in the English department.

The first 5 chapters are great, and if the book continued in that direction it would be an amazing gripping experience.

Alas, after a thrilling opening, the tone of the story shifts, first subtly, then not so subtly, towards a drama about feels, frustrations and psychological issues of the characters.

The author has a great affection towards the characters of the story, to the detriment of the story itself.

From excellent to mediocre

Reviewed at: Filler: A Winking Witch and a Grinning Rogue (Part IV)

The story went off the rails in latter chapters. It started strong, but slowly faded.

a decent way to pass the time

It's definitely wish fulfillment but not the worst example of it. I enjoyed reading it through to the end. The start is probably the worst bit and the story focuses altogether too much on how the women look, though if you can look past those flaws there's a sweet core story only mildly bogged down by it's detractors.

good start then it becomes chaotic

this story feels like the autor just forced himself to finish it. The first half is sctructured coherent and interesting. From there it just goes downhill, messy changes of POV incoherent characters and a rushed pace i can't recommend unless the middle to ending is rewriten.

Its really a good story here on RRl from a new writer.

A weak MC and his heroine with lots of tencion and typical mistakes of a new writer of a to fast paced story at the end.

Still it got good till the end and iam happy about it that he at least finished his first book and will be happy to read his secound.

Happy I decided to check it out

Reviewed at: Chapter 17: Level Up

This isn't your traditional isekai story. The MC gets one skill that has yet to be useful, and a curse that is most definitely a detriment. The characters are great, worldbuilding is on point, and there are no grammar issues. There are enough teases as hidden mysteries that you won't be disappointed that the plot is taking its time to get things right from page one. This is after reading through chapter 17.

So much going for it at such an early stage.

This review is up to chapter 6

Overall it's off to an amazing start, the writing is engaging, the characters are already well developed and it manages to use the tropes it's built off in interesting ways. It does not have a grimdark tag and it may never be gimdark but the descriptions are visceral and intense. What truly surprises me is that each of the chapters so far has been entertaining in a different way, a trend I know can't continue forever but it shows the skill of the author.

Edit: the story took a hiatus so I felt a need to update the review post-return but honestly while there's a clear change in story direction and a slight change in style that starts a few chapters into the new ones my review remains unchanged.  Every chapter is a delight and often is in a different way than the one before it was a delight.

Read in one day

So all i can really say is i love it. I started reading this around 7 am this morning when i found it and finished at 9:53 PM

Give it a read or regret it for the rest of your life. Your choice

If you press on rather then getting stomped on a story detail, you will miss out on the whole picture.

Heh..yeah, i read 35 chapters because the slow burn turned out to be delicious. Classic stuff yet Origial in its own way. And all characters reveal more about themselves rather then grow out of actions taken. True storytelling in my book.