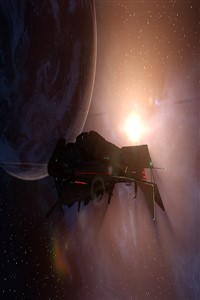 Chet is your average college student. He works at a part time job to help pay for his education and clips coupons on the weekends to help save a few dollars when he goes shopping. However, dreams of a simple life and working at a decent job are quickly tossed aside as he finds himself transported into what he assumes to be a fantasy world! Everything was going exactly as he expected it to go, as he had read a few novels describing situations exactly like the one he found himself in. But those expectations are quickly thrown out the window when the Demon Lord herself shows up for a surprise visit!

Perhaps this land of fantasy isn't so fantastical after all.

(Updates whenever this funky cat completes a chapter.)

I'm surprised this story is not on the trending chart. maybe you just need some more chapters. I love the flip on the classic reincarnation trope but your title and description lean into a sweet surprise twist. it may be working against you in attracting readers. hopefully this this review will help. great story work so far. way beyond what I was expecting

A very suprising take on the genere. What may come across to some at the begining as overly snarky as a rebellion to comon tropes in this genre delves into something a bit more serious. All without going too far in the other direction- leaving a very enjoyable adventure full of suprise, great companions, and interesting concepts. It doesn't hurt that the update pace is currently breakneck- so one is not left waiting long for more. Overall great stuff!

Crude and rude in a good way with a shotgun ending that leaves a lot open ended but still ends at a good spot.

This is the kind of work that will one day inspire Chip to write his own isekai.

This felt a lot like reading about a more blunt Han Solo style protagonist in a nice twist on the isekai genre, especially as it shows up on RR.

Very interesting and upbeat. Breaks the monotony of other "summoned hero" stories. Funny as hell

Short and sweet. Every character unique and interesting.

A wonderful light, but short story about pure love

The best part of this story is the main character.

The hero may seem like a complete jerk at the beginning, but then you will realize that it is. However, he is a wonderful jerk with strong moral attitudes and principles, and despite his outward childishness, he is able to see the consequences of his own and others' actions.

He somewhat resembles Helltacker with his dream of a demon girl, but without a harem (no harem at all, my dudes, I'm pleasantly shocked).

The novel itself in places ridicules hackneyed cliched situations, but nevertheless does not dwell on it and provides readers with a decent dose of humor (and indecent humor, too). The book has some logical inconsistencies, but they didn't seem too critical to me, something at the level of how old Ben Kenobi relaxed on Tatooine, the birthplace of Lord Vader, who, well, is not at all connected with the legendary wanted Jedi master General Obi-Wan Kenobi

the chief of police simply releases the captain of a transport ship that was about to deliver a full hold of warheads to a shipyard in a star system engulfed by a rebellion. Even though the captain belongs to the same race as the main rebels (she already has a constant problem with hiring a team, so it's doubly surprising).

This work has an "open" ending, which may cause some indignation among readers due to the lack of the next dose, nevertheless, it can boast that it ended on a good logical note, and did not slide into a "dull crap" while the authors are driving themselves into a corner trying to plot tie all the ends together, which it happens too often with TV series and many books on RR.

I can't say anything about spelling, since I am not a native English speaker, however, I did not have any problems with determining who is talking to whom, or separating the main character's internal dialogue from chatter with others, the narrative from a different point of view is separated so that there is no confusion.