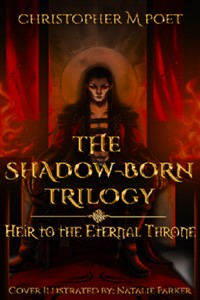 Heir to the Eternal Throne

Aldrin is the oldest and firstborn of the Shadow-born Vampires, the heir to the Eternal Throne. He has lived a life of luxury and privilege, with servants to care for his every whim. He is the Elder of his own coven and devoted to the teachings of the Dark God, his father, mentor, and master.

Aldrin's life of comfort and security becomes threatened with the emergence of a mysterious woman he chose to save, and a desire to walk a different path than that of what the Dark God has chosen for him. Yet, unknown to him, there is another danger, as yet another is watching his every move. In order to survive, Aldrin must fight not only his destiny but his god.

Spoiler Free Review of Heir to the Eternal Throne

The author has a great style of writing. He is descriptive, yet not overly so. The combat is clean, concise and well written; it is easy to imagine the fight when you are reading and as someone who tends to use the words to imagine whats happening in the book, this is a great thing to have.

This is probably the most standout feature of the story so far. In these 5 chapters, the plot has progressed a fair bit but at the same time, it feels like it hasn't actually progressed that much and I find myself wishing there were more chapters. There are a few unrelated plotlines which I get the feeling they will all tie into each other later on in the story. The distinction between Mortals, Immortals, and Celestials is clearly defined, each with their own main race as of the moment.

The grammar so far has been good. There are no errors punctually or even errors in tenses like using two different tenses when one would suffice. The way the sentences and paragraphs flow is nice and well-suited to the third person perspective this story takes. The only complaint really is the fact that the author has written the wrong word (only once or twice as far as I know). The only mistake of this type is the fact that in Chapter 5, the author used "fitting" instead of fighting but there was most likely a mistype then autocorrect fucked it up kinda situation (I totally feel you, author, haha).

The main character is a very clearly defined character with his own moral compass despite being cruel when he needs to be. All the characters are competent and much more real than any overpowered mc from an average RRL fantasy story. The main character is not overpowered, the only indication of potentially OP main character is at the end of chapter 5, but to be honest, that was the only time I have seen something distinguish him or his sibling (Shadow-Born Vampires) from any average vampire in this world. I mean sure his siblings and he are stronger than the average vampire, but they are all competent combatants with their weapons, especially the Main Character. Gave it a 4/5 due to the lack of detail in regards to the main characters 2 siblings. However, that sort of thing comes with the time given that they are side-characters of fair importance (as far as I am aware).

Although it is not in my habit to give scores higher than 4, I am giving this a half a star higher than I normally would due to the potential this story has and the fact that the author is using his idea and world to the fullest. He isn't ruining it with a shallow plot and overpowered MC. If he was, his opponent in chapter 5 woulda been bitched slapped within the first 10 seconds of the fight.

Edit: reduced the 5/5 scores to 4.5/5 since I forgot I never rate stuff 5 unless they are on the level of Tolkien (LOTR author) and Raymond E. Feist (International Bestselling Author)