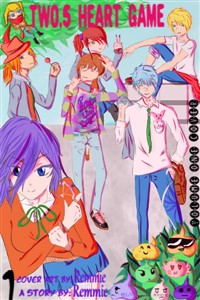 (UPDATE) THIS IS A SERIES REBOOT.

(After some thinking, I decided that I don't want to give up on this project. The story is already completed in my mind, but I still need to share it with everyone. Thus, I will reboot the series when I have smoothed out the details instead of writing and posting drafts that aren't thoroughly planned with care. Until then, all chapters will be deleted.)

Ok, do not panic, calm down and assess the [email protected]# THAT. This would be a perfectly normal situation where I should panic...even though if I don't know if this qualifies as a NORMAL situation.

Before I died the manga I was reading called Cupid Lover: First Shot Ai or just First Shot Ai, finally updated its last few chapters. The story circles around the cute, cupid angel in training Usagi Hana-chan being assigned to pair cool;rebellious Kitsune Daiki. Eventually they fall in love after many obstacles and finally defeat me, the final boss, the anti-cupid who's sole goal is to ruin all relationships for god knows what reason, Amaya Raz(aline)-chan. (Name literally means mysterious night rain).

But Amaya just got booted from both the heavens and the human world and sent into exile in the Split between worlds...but...wait...a character died there..

NO.NO.NO. I don't wanna be exiled and die!!! I mean, uh..redemption right? The other characters got it!! I STILL HAVE TWO MORE CHAPTERS, C'MON GOODIE TWO SHOES USAGI OPEN YOUR DAMN HEART!!!! Two chapters...I still have hope....

No, I gotta take this into my own hands, like hell I'm going to get exiled and die. Go ahead and be lovey dovey on your own I'm going to go and travel the world or something!

There will be some anime references and other references. I’ll try to add the meanings in at the end of each chapter.

I plan to make th story a slow progression type of story with a lot of details and a ratio of 3/5 inner dialogue 2/5 talking. I don’t plan on doing fillers and want to het straight to the point.

A good example of these types of story styles is the one with Koushoin Reika. A lot a chapters, fun and interesting.

Each character, moment, and thing is important and put in their for a reason.

MOST IMPORTANTLY. I like to draw (and fix my mistakes if they are pointed out to me.) so I will be going back and adding things on old chapters sometimes. If you want to see the drawing to help with visuals, go ahead and look.

I cannot promise that they are good and may ruin what you think the characters should look like.

Improvement and Progress Since Last Read

I came by to look at the story again after leaving it for a bit, and it did improve a bit on grammar and plot.

Its slow, and I get that, but you should try to remember that readers only can wait so long for things to happen before they loose interest.

Overall, has a lot of potential and I’m glad I came back to it. I’m interested to see what you have for the future.