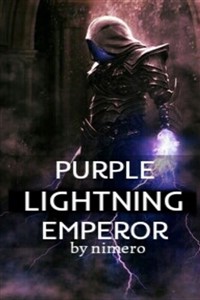 This is a story about Shad, a young orphan who was struck by lightning. Instead of dying, he was reborn into another world known as Eidrin. The ambient mana on Eidrin is extremely dense and abundant, allowing mages to reign supreme over the rest of the populace. Follow Shad as he develops the strength to survive in this new world and reaches heights thought to be unattainable for mortals, all in a quest to learn the truth behind his reincarnation and the purple lightning that resides in his soul.

The cover isn’t mine , just found it on google . All the credit goes to the artist that designed it. If the owner of this pic wish for it to be taking off , just let me know.

A better version of the standard cliché Xianxia stories that litter this site. The unfortunate issue with these types of stories is they lack an actual story.

Overall spelling, grammar and sentence structure isn’t bad with only a few minor mistakes of any real note.

The plot or lack there off is the standard you’d expect to see in every Xiansia story ever. Overpowered character smashes world with a sneeze while everyone is constantly shocked and in awe of the non-obstacles the protagonist “overcomes” yet still underestimate the protagonist for the very next challenge only to have the cycle repeat. Normally this is done to some sort of harem/love interest, however the protagonist hasn’t built one as of yet.

To the author, this review may seem a little harsh but it really shouldn’t be taken that way. Please use it instead to help improve and move forward.

One of the most common mistakes most new authors make is excess exposition. I.e. I don’t need to know the details of ranks, how your gold is broken down into the various bits of change, how big or small the different countries are and so on. The only time exposition should be included is when it is relevant to the actual story/plot.

Plot, I urge you to research the hero’s journey. This will help you with your story/future stories overall. Right now your character sort of already exists in the world and is doing things just because. He realistically has no real goal or driving reason to move forward. “Protecting your family”, the way you have established it is to weak of a motivation. I.e. you’re a prince of one of the most powerful nations with experts coming out of every nook and cranny possible, not to mention how individually powerful most members of said family are. This basically means your protagonist has no real reason do anything other than lounge around and under normal circumstances wouldn’t even assume something terrible would happen.

Character, again the protagonist feels like a walking cliché. His backs story is about being an orphan with everything bad that could happen to him happen. Then he suddenly finds himself in a new world reincarnated as a prince with a loving family that he suddenly wants to protect. Assuming the main character is from modern day earth originally, his actions make little sense. Missing that loving bond and being attached to it are one thing, deciding to isolate oneself to a mountain for two years to undergo intense training from the ages of 13 – 15 with no real reason is another. Additionally, what irresponsible parent would even agree to let their child go through this kind of training at that early of an age? This is even more so considering his background of being a prince. Royalty typically have much less freedom than a regular citizen or even a noble. His youth would be spent under strict supervision being monitored by multiple different teachers and protectors while studying the finer points of etiquette, politics and other required knowledge.

The Queen is another major issue within the story. Even if he was a favored and spoilt son, the personality you have set up for the Queen seems at odds with someone that would agree to just let her son go off to train. Furthermore no matter how bad her relationship with her husband was, no Queen with/or without a proper royal upbringing would be foolish enough to insult her husband the way she does in front of not only her kids but her servants. Any intelligent and especially controlling figure would know the importance and value of keeping up appearances. She would be aware of the gossip this would cause among the people, how that gossip would get back to the nobility and eventually undermine their rule. A king taking such abuse would appear week and no noble would ever respect or in extreme cases want to serve under him. It would be one of the fastest ways to ensure you are overthrown.

There are a few other issues such as making sure your protagonist has real obstacles and challenges to overcome. He should grow as a character from those challenges and move forward as an individual (good or bad).

I also recommend you read, “The Iron Teeth: A Goblin's Tale”. The author has a talent for establishing well flushed out characters and setting. If you haven’t I really recommend you also read, “Harry Potter”, the author is probably one of the best examples of how to set up a truly engaging plot.

Overall, I hope this doesn’t dissuade you from writing but instead pushes you forward to improve. I took the time to read your work and write this feedback so I am interested in seeing you succeed. All the best!

I like the premise of the story, and I tried to read it all but, I just couldn't continue after chapter 50. The grammar mistakes are just part of it, the writing is wooden and fails to engage the reader. 50 chapters in and all the characters are shallow and have no real depth. And finally half there are moments when it feels like the story is being written by a 10 year old. This story has potential, and that's why it even got 2 stars, but it needs a serious rewrite, and a editor that can help correct at least the super obvious and easy to spot mistakes that are throughout the chapters.

The story is a standard Transmigration story in a Cultivation World with all of the usual background elements. The MC is the 4th Prince, has a loving family, a rare OP talent for lightning elemental cultivation and *Yawn* has some enemies....

The writing is rough but readable, the main problem is that the Story really does not seem to know where it is supposed to be going. Is it a Heroic Story? A Funny Story? A Revenge Story? If the Author could just find a Theme to follow-- and Write it(!) this would be a better work.

Nonsensical world building, repetitive word padding, and an overreliance on power rankings mark this otherwise cliche xianxia story.  The protagonist floats effortlessly from one scene to the next collecting accolades for knocking over straw men masquerading as obstacles.  Women swoon at his manly figure, his peers whisper in awe, and the impossibly numerous nobility impotently rage and scheme.

I got through seventeen chapters before it looked like it wasn't going to change. Too many stories create a character that is either too perfect for his own good or grossly overpowered from others. Some of those stories I really enjoy and do really well, but they do it by showing how that person obtained that strength. Making a character grow from a seed to a sapling to a tree is important for people to identify with the character.

This is not one of those stories.

It's good that teens try themselves at writing, but they lack the experience. You can't write a dialogue with old wise wizards if you're like 14 yourself. It's a decent try, but ultimately it's ruined by the shallow story, nonsensical dialogues and 0-dimensional characters. Like looking at a picture drawn by a child. It's cute, but you won't put it into a frame and hang it in your apartment.

The only reason I gave this a low score is because it was poorly written with absolutely no grammar. I assume the authors primary language is not English. With that being said I think the story has great potential if he could find a true English translator.

Decent story kicked in the balls by bad editing

This is a pretty good off the path cultivation novel but the problem lies in the fact that the editing and review of it sucks. It sincerly needs to be proofread a bit more before releasing. I stopped about 20 chapters in because it just got to the point it was not worth it .

this new one is most definitely better, i personally found the purple little girl strange, and the story has improved slightly.

Needs a bit of work

The overall story and characters are pretty good, with a fairly interesting combat and magic setup. My main issue with the story is that the grammar seams to be getting worse not better as the storyline moves on. I've currently stopped reading at chapter 50 in the hopes the story will be tidied up. I fully intend to check back in a few months as the story itself is pretty decent.