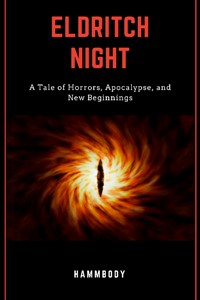 Eldritch horrors descend from the sky to consume the world. Only a last-minute intervention by a mysterious Hegemony of Worlds saves Earth, albeit temporarily. Skills, levels, and battles with twisted monsters are part of the new reality the survivors will have to face.

Augustus Finn is a young man driving home when the new system is imposed. He is thrown directly into danger as a twist of fate places him in an area designated, by the automated systems of the Hegemony, for the containment and disposal of eldritch energy - areas also known as dungeons. Without the aid of tutorials, or the orientation areas commonly known as "newbie zones," Augustus will have to make his own way to survive in unforgiven circumstances.

He will face monsters, aliens, other humans, and his own darkness as he struggles to grow strong enough to face the countdown to the apocalypse.

Author's Note: The rewritten version of Book 1 is here: https://www.royalroadl.com/my/fiction/19458

Now that enough chapters are out

but now we start to see the slump after the initial burst of creativity, the power scales are all messed up, the MC is just stupid and not in a realistic way, plot armor and god powers abound making this your avarege Overpowered main character with no personality and suffering from everything most bad webnovels/lightnovels suffer from

befitting of the eldritch.

The story is nice, it took the randidly ghosthound approach mixed with a bit of cthulu to mach and created an interesting mix.

Mhe’s:
Fishing riddles and eldritch riddles: it’s a con if they end up nowhere, is a pro if well used.
Fast paced action: it’s good when is explained, not so much when is not

Lack of detail and excess of detail: sometimes the story jumps and you end up bot lost (when climbing he eats on a cave that he never found, the battle with the octopus) other times there is just too much (the bridge battle has too much and too little for my taste).

No throttle: so from trapped in a dungeon, to climbing in somewhere, to again spider food but not, then the protectors, travelling, the town, etc. Even when the MC is safe and the pace could slow down it doesn't to keep you on your toes. IRC he stayed about 10 days (4 unconscious and 6 conscious with the protectors) however that was resumed to 2 conversations, 1 training session and the tallying scene in his spartan bedroom (about 2 chapters).

So basically, a nice novel trying to improve, it shows promise and the author is changing, adapting and improving. My main issues arewith the first few chapters and a few scenes or choices from the mc that are questionable, some things that aren’t explained but all in all it’s a good novel and it gets better.

the choice of 1st person and the vivid description really give me a feel of what the MC is experiencing coupled that with the "Analyze skill" give me a sense of what the main character is up against overall im really interested in what comin up ;D

Read up to chapter 56

This is actually one of the best litrpg books on this website. I did expect a bit more horror but overall it isn't bad.

Plot: the author pulls out the apocalypse dice and rolls up lovecraft. The main character, Gus gets caught in a dungeon and then ends up fighting in the same dungeon. Add in another apocalypse on top of the first one.

Yeah, the world is ruin but it can always get worse.

The game system reminds me of a lot of So I'm a Spider, so what? Skills evolve from other skills and you can easily become god king. This is by design the monsters get weird and strong pretty early. But it doesn't feel that the characters are too strong.

I am picky about what books I read. Too many grammar errors, too much unrealistic story telling and I have to put it down. As I have read this a few chapters shy from the ends I can tell you it is worth a look at.

My main problems is that I think the author jammed a big twist and he didn't make me care or know enough about that character. Also the book is in first person perspective.

I don't get the appeal, the MC isn't very interesting, neither are the characters around him, the only interesting part of the story is the eldritch part

This is written at the time of chapter 28 and there'll be spoilers in here up until then.

If this wasn't a different account to the guy who wrote Randidly Ghosthound (RG for short), I'd be thinking that the author was exactly the same.

Let's start off with the MC. The similarities between the two are staggering.
Both started off in a dungeon (which should be impossible in both cases). Both needed someone else to save them from it. Both then had that someone else train them, the only difference being that these guys are a faction whereas the one in RG was a single person. Both have an external force helping them out and giving them an edge over everyone else. Both also have something trying to control them (that same something probably being the reason they started out in a dungeon in the first place).

The 'system' is pretty much a carbon copy. You gain skills in exactly the same way (not that that really means anything since most litRPG fics on here are the same in that aspect). Feats here are Paths in RG. The descriptions of them are written in exactly the same style. The way to progress in Feats are exactly the same as how RG does it with Paths (when you level a skill, you get a point that you can use to put into whichever Feat you want). Even the way the MC looks and analyses Feats and chooses which ones to pick next is exactly the same as how RG's MC does it. The way the 'system' let's the MC know that something is wrong (talking about that corruption Feat) is the same as RG's method (that heretic Path). I wouldn't be surprised if the 'system' sent stuff to take out the MC because of that corruption the same way RG's 'system' did because of heretic.

The 'bad guy' plot is different though. The 'bad guy' wants to destroy the world and the 'system' is there so you can level up and take it out and... oh no, wait, that sounds familiar too...

Even the writing style is almost identical to RG's author's writing style, that being the reason why I'd think the author is exactly the same if this wasn't a different account. This is why the style and grammar score are so high because they're both well done. The characters around the MC are all authentic and don't revolve around him, there's a nice mix between humor and seriousness and not much, if any, spelling or grammar errors.

The story and character score are so low because they're basically a copy-paste of Randidly Ghosthound, just with a bunch of renaiming.

In summary: if you want a few extra Randidly Ghosthound chapters every week, then this is for you.

The system reminds me of the system in legend of randidly ghosthound. The opening is fairly similar. Sadly i lost interest in the book.

Made me write a review, so ehh

This fic reeks of impatience and wanting to get to the good bits story-wise as quick as as possible. It could use an additional 5 chapters of length just focussing on characters and their thoughts to properly make them characters rather than what they are now. It feels like you want the story to be similar to a puddles' storyline, but chomping at theb it left you making jumps progression-wise that I consider to be unwise.

This is a story with mention of themes some might find a bit disturbing. Which is fair, seeing as not everything made sense. Parts are closer to rants for me, and the names did make my brain hurt. Not because they had any kind of energy or anything. I just had a hard time figuring how to pronounce them.  +1 for that though.

Story is good yet I feel no need to say that. Most should have known that already. 5/5

My only critique , I want to read book 2 , and I have been waiting over a year :P
Hopefully the author will start writing book 2 of the series again soon .
But I am no longer hopeful :P
But you never know. With COVID keeping everyone indoors, it may be the perfect time to write again.