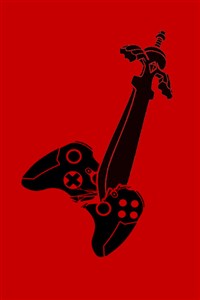 Everybody knows that talking about IRL is taboo

We confirmed each other's identity with some sharing of private information, that know one else could know. We both looked completely different from our normal selves. The only reason Jessica lowered her guard earlier is because she had also seen herself in a mirror and at some point realised that I could actually possibly be her boyfriend.

“How? Why do we look so different? Where are we?”

“Actually, Jess, take another look at your face in the mirror, do you recognise it from somewhere?”

Jessica looks into the mirror intently. “It does look familiar.”

“So… this is gonna sound a little crazy but I totally recognise my face.”

Jessica stared at me expectantly.

“It’s the face of my character creation profile for ‘It’s not a game’.”

A wave of realisation seemed to wash over Jessica’s face and she sharply turned to the mirror again, this time scrutinising her own face. “Huh?!”

It seems this was also true for her.

“Wait, how? Huh?” Jessica was at a loss for words.

It’s not a game. Despite the name, it actually is a game. An MMORPG. What sets it apart from others though, was that it was what was called a true ‘permadeath’ game. Basically, you installed it via ‘steam’ (a game sales and download service). Once installed you create a character profile and play with that character. As is the case for a permadeath game, if that character dies, there is no do-over. You lose the character and all his progress permanently.

What makes it a ‘true permadeath’ game is something that has only shown up in a handful of daring games recently. Not only do you permanently lose your character on death, but the game also uninstalls itself. You literally only get one life, one shot at the game, well per steam account anyway. You could always create another steam account, but you would have to purchase the game all over again in order to create a new character, not only this but only a level four or higher steam account is permitted to purchase the game, this means that you would have to create a new account, purchase a bunch of games on it and play these games for many, many hours before you would be able to even purchase another copy. All in all this obviously not a very practical thing to do, nor would anyone be willing to go through all that effort and expense to do so, hence the ‘true permadeath’.

This is ‘true permadeath’, the most hardcore kind of gaming experience. So few game publishing companies are daring enough to create games in this manner, that I can count the number of true permadeath games on one hand.

‘It’s not a game’, was the most recent of this genre, whatsmore being an MMORPG with PVP elements, it was definitely going to be a hair raising experience.

Why would anyone pay money to play a game that you could easily sink hundreds of hours into leveling your character, only to lose it all in a moment, you ask?

Simple, the thrill. A game like that, where so much more is at stake, is truly thrilling and way more immersive.

Of course, I haven't actually played the game yet. My girlfriend Jessica and myself purchased and downloaded the game yesterday. We often play games together. Although Jessica normally likes FPS games more, she was willing to try this one due to its extreme nature.

We both created our character profiles after downloading the game. However the official servers for the game only went online the next morning. I think the game company wanted to give everyone a chance to set up their characters in as much detail as they wanted, before all starting the game together, hence the delay before the download release date and the start of the servers.

Since it was the weekend and we had both had nothing to do until the servers were turned on, we went clubbing with some friends that night. And fast forward to waking up in a strange place this morning.

“I woke up in a room a few doors down from here. At first I thought this was a dream, but now I can’t be so sure. I mean, you’re here as well.”

“I don’t really understand what’s going on, myself.”

“Look regardless of whether this is a dream or not, I don’t think we should stay here. I mean the doors were not even locked, it doesn’t look like we are being held captive or anything.”

“Let's get out of here and see what's going on. That knife of yours, I think we should take that along just in case.”

She was strangely knowledgeable about such things.

“I found it in this room, along with the clothes I’m wearing.” Jessica looked a bit troubled by that last statement. She must have also woken up naked.

“The dagger was in the corner of the room there, by the bow.”

Bow? I turned around and in the corner of the room was a small bow and a quiver with several arrows in it.

“It's strange, I just remembered when I was creating my character profile yesterday, I chose to be an elven thief. The dagger and bow were shown to be my starting equipment.” That said I only just realised that Jessica, or should I say Misty was an elf, with dainty little pointed ears.

Pondering this for a moment, I reached into my pocket and pulled out the ‘card’. Surely enough just below the name Aluarc was listed ‘Class: Paladin’ and ‘Species: Human’. Aluarc was the name I had chosen for my character and Paladin was the character class I had chosen.

I did not know Jessica had chosen a Thief as her class, but she had informed me of the name for her character at the party last night, so that we could meet up in game the following day. The character's name was ‘Misty’. That's why when I saw Aluarc on my room door and Misty on this room's door I was so compelled to enter.

Looking up at Jessica, “Do you also have a card like this, listing all your characters details?”

Jessica nodded, “And a pouch with 10 copper coins in it.”

“I see, same here. If the stuff in this room matches your ‘starter equipment’, then I wonder…”

“Okay, put your gear on quickly.”

I led Jessica out of the room and back down the hallway to my room.

Surely enough there in the corner of the room, was a longsword and a small shield. My Paladin’s starter equipment. I was in such a daze earlier I didn’t even notice it there.

My cheek hurts. I instinctively raised my hand to my cheek and grimaced.

“Sorry. I was really scared back there.”

Jessica apologised. Oh right. She had cut me with the dagger there when I first entered her room.

One of the Paladin’s starting skills should be ‘heal’. Staring at myself in the mirror, I slowly raised my hand to my cheek. No, I must be crazy for thinking this, but then again this whole situation is completely crazy. Regardless I tried it.

A faint yellow glow came from the palm of my hand.

I had stopped immediately. But the cheek felt all tingly. Jessica’s mouth was hanging open. I turned back to the mirror. Sure enough, the wound was gone.

“One of my Paladin’s starting skills was heal. I’m still not sure if this is a dream or what, but apparently we really have taken on the rolls of our characters.”

Jessica’s mouth was still hanging open. She seemed to finally realise this and shut it quickly.

“I don’t know whether to be scared or impressed.”

I shrugged. And with a smile on my face “But it sure is cool.”

I attached the shield to my back and the sword to my side, using the provided harness.

“Let's get out of here, and see if we can figure out what's going on.”

We left the room and headed down the stairs.The bottom floor wasn’t very spacious. There was a fire place with some chairs in front of it and on the other side of the room a counter with a burly woman behind it.

“Gud mornin,” she bellowed in a rough voice, a little too loudly.

Jessica’s hand was gripping the back of my shirt nervously.

This place seems like the typical ‘Inn’ that you would find in an RPG or medieval, type of setting.

The woman gave a sigh of exasperation and continued, “You’re in Heimos. I’m the owner of this ‘ere inn: ‘The burly lady’.”

I had to restrain myself from laughing at that, it could not possibly have been named more aptly.

“Another strange question, I don’t suppose you’ve ever heard of a place called London… AHHHH,” pain immediately wracked my brain. Too much pain, I could barely stay standing.

“Mr Aluarc you okay?" the old lady quickly called out in concern.

“Michael…” Jessica was also calling out to me, as my senses were busy rebooting.

“Arrgh!” Jessica sundely keeled over in pain. She was on her knees clutching her head.

My own pain had already subsided. “Jess… Arghh,” shit not again.

“Oih, just wait ‘ere u lot, I’ll go get the doc,” The woman left the counter and hurried off outside somewhere.

“Whats going on,” Jessica asked in a weak voice.

I helped Jessica up. What was that? The pain is completely gone now.

“It happened when you mentioned London and when I mentioned your name. Also, when you called out to me again.”

I couldn’t but help think to myself that it was impressive she was able to notice things in such detail, despite being racked with pain.

“Do you think we are not allowed to talk about anything IRL?”

Jessica made a good point, but, “But we’ve been talking about stuff like that and calling each other by name the whole morning?”

“But not in front of anyone else, perhaps?”

She was making a lot of sense. “I think you’re right. I still don’t quite know what's going on here, but I think it would be good to not talk about anything like that in front of anyone else. Also it seems that woman has us checked in here by our profile names, she called me Aluarc. Let's call each other by our profile names for now, just to be safe.”

“Anyway I don’t think it will be good to answer any of the coming questions when that doctor gets here. Let's get out of here.”

I will see if I can commit to a weekly release schedule, no promises.  Also the first few chapters might be a bit up and down with that.

Also, there are many things I am uncertain of as I have never written anything before.  So things like what is the right chapter length and correct grammar (I failed english in school and it's my first language lol).  So do bear with me, but that aside all forms of critique are welcomed.