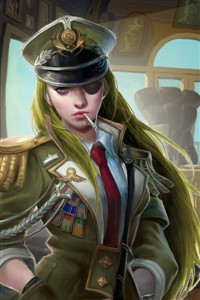 I have added a map, its a rough map to give you a general idea!
Hope you like it!! 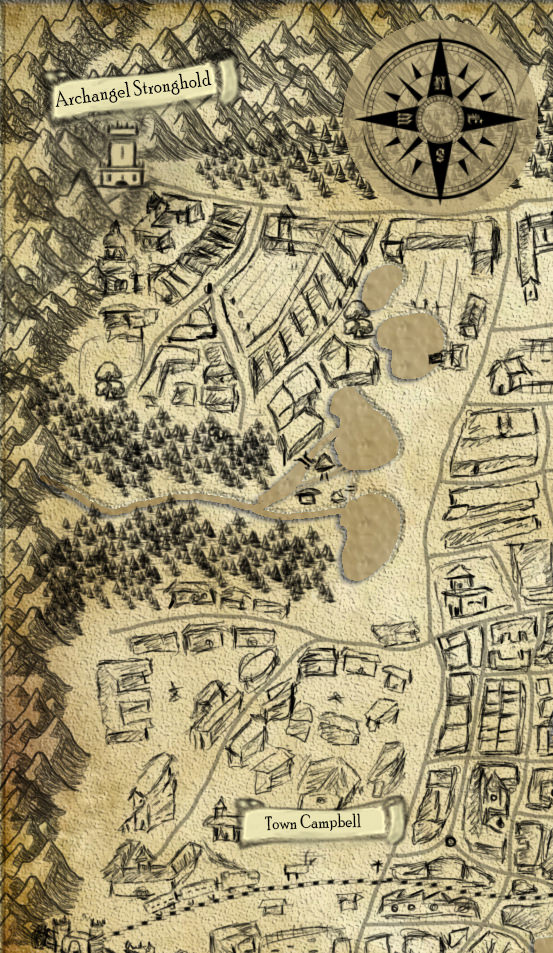 In the town of Campbell, it’s the regular beautiful morning as always.

The tavern maid unlocked the chicken coop hatch and let the hens out, so she could collect the fresh eggs. The farmer's eye was swollen but he still milked the cows early. Many other people also have just woken up and are pretty laid back as they stretched their arms and yawn while basked under the sunrise. A boy in a bicycle roamed around the town as he hurled newspaper at doorsteps. Newspapers kept the townsfolk touch with the outside world.

Campbell is a military town whose main function was to provide hospitality to the soldiers and the students of Archangel Academy. Some people that lived there were personal servants of wealthy noble students who serve their respective master when they could. The town runs pretty late until night. During the morning the soldiers need to report back to their respective stations and the students have their lectures to attend to. That's the reason the people were very relaxed and sluggish, every morning.

The academy’s bell clearly reverberated throughout the town which implied the first day of the academy has begun.

The town was peaceful until a young boy sprung out of nowhere came dashing at a speed like an athlete. His face looked pale and terrified as if his life was at stake. It was none other than Samael.

“Out of the way!”, he screamed and bumped and knocked down the newspaper delivery boy who fell off his bicycle. His newspapers scattered across the ground which was kept in his basket and behind the backseat.

“WHAT’s YOUR DEAL!”, frowned the newspaper boy as he rested on the ground.

“I am very, very sorry!”, replied Samael continued to run without even turning his head. He reached his dormitory and raced on the stairs until he went back to his room.

He searched throughout the littered room with unwashed clothes, everywhere.

“AH, there you are!”, exclaimed Samael as he picked up his badge and pinned on his uniform jacket sleeve. He wore a new pair of trousers and shirt that he bought from the savings after he worked his ass out in the part-time jobs.

Sadly it was all dusty and drenched with sweat.

He dashed without even a realizing about his outfit that was all messed up.

“I am so dead! Aunt Cecelia would chew me alive! Gotta take the shortcut!”, he mumbled to himself as he dashed down the stairs and proceed to the partial-forest region which separated the campus and the town. It also had a stream that flowed down the Osp ponds.

He entered the woods and then crossed the stream over an old log that was used as a bridge. After few minutes of trail through the thicket, he finally managed to reach the other end.

He reached to the open compound area which was the part of a campus.

‘Thank god! If I had gone through the main gate, they probably have would never let me in!’, thought Samael as he let a sigh of relief.

But before Samael could take a breath of relief, someone called him
“Samael boy?!”

Samael startled as he would be severely punished for trespassing through the backwoods was prohibited.

‘I am so dead!’, thought Samael as he gulped down his own spit down the throat, anxiously

“You is Late! All students, inside hall. Madame Cecelia already shouting. Hurry boy! Hurry!“, exclaimed a lady, who held a broom and dustpan on her hands.

“OH! It’s just you Aunt Savonije! Thank god!”, exclaimed Samael as he bends over and his hand on knees as he tried to catch some breath.

She dropped her broom and dustpan and came rushing to his aid.

She walked like a penguin as she was not accustomed to the dress. Her English was also miserable as she was the last survivor of a nomad tribe that got killed during a war between Abros and Stezar. She learned a little bit to speak English from her deceased husband who rescued her and bought to town Campbell during the war. She still hasn't mastered the language and Samael helped her out occasionally in his free time.

“So Aunt Cecelia has already started shouting, that means the speech has begun! ..... BYE Aunt Savonije! And thanks for the bread! Cya later”, said Samael as he starts to run, once again.

Samael stopped right in his tracks and checked if anyone else heard that. He goes back to her.

“Mrs. Savonije, I think you meant Good Luck! And please I had told you before, don’t listen to those mischievous students who’ll just provide you wrong information about words. Just remember my teaching about language and you shall be fine! Don’t let other students teach you such words! Alright??”, told Samael.

She started laughing as soon as she heard Samael and patted his head.
“You are funny! Is you jealous? Haha. You are so coot person.”, replied Mrs. Savonije smilingly.

“Eh? Why would I be jealous? Nevermind! I think you mean cute. Anyway bye!”
Samael resumed his pace and raced to the assembly hall. Thankfully, no one saw Samael entering through the woods. But the main problem was yet to be solved.

“So now where the heck is the assembly hall? ”, exclaimed Samael to himself as he lurked around the enormous campus of Archangel Academy.

A note from Homeless Dancer

Well I am working on the map! My drawing is not that good but it would be lot easier to understand than just with words.

The map ate most of my time, so the actual context of story is short!

If have any doubts about map or anything else, I would be glad to help out!

Bio: I've been accused of vulgarity. I say that's bullshit.