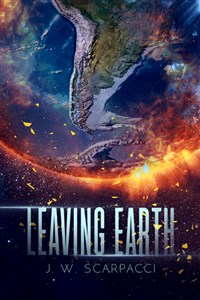 After Dr. Hawthorne Crenshaw's university experiences a terrorist attack, he undertakes a titanic effort to colonize a new planet in an effort to rescue some small part of humanity from what he suspects is an unstoppable spiral into a Dark Age on Earth. Subjecting himself to tens of thousands of years of repeated cycles of cryogenic freezing and unfreezing to monitor his passengers, he and his AI T.I.A. shepherd Earth's first, and perhaps only effort into colonizing a new planet.

As the title says, this is pretty much The Fountainhead in space. I’m a sucker for hard sci-fi, so I forged through quite a few chapters, hoping to get past the politics and on with the story, but it never happened.

Basically, if you like Ayn Rand, you’ll probably like this. It’s well written, and hews closely to her formulas. If you prefer Alistair Reynolds, you may want to give this one a pass.

A story about a not so unlikely future.

Leaving Earth is the original story of a man who, after surviving a terrorist attack, begins to see that humanity is on course to be the cause of its own destruction. With this knowledge in hand, the only course of action action is to leave Earth. Leaving Earth is told through the perspective of an emotionally broken man who, despite his disillusion with humanity, realizes that the success of his mission may be the last chance for the survival of the human race. Maybe life itself.

Leaving Earth is not a generic science fiction story, and it is not fantasy disguised as science fiction. It is less Star Wars, or even Star Trek, and more 2001 or the Martian. I would place it in the genera of hard science fiction. But, unlike some works in that genera, the author doesn’t attempt to impress the reader with his knowledge of esoteric mathematical equations or concepts unfamiliar to the layman. The story takes current and plausible near future technologies and uses them in a realistic way. Furthermore, the author leverages the use of these technologies to smoothly introduce a very possible and grim future that the reader may live to witness. The authors reflection on this possible future, the future that spawned the terrorist attack that sent the protagonist on his voyage, are a commentary on many of the social, political, and economic issues of today, and are a sharp warning of the extreme results those problems may produce if left unchecked.

The Style was very sci-fi

The story was good not too fast not too slow

And the character is developing thought slowly

Politics, politics, and a dash of manipulation

Read only if you like to hear the thoughts of the main character who rambles on and on about what he believes as failiures of the modern world. He leaves the earth doing the bare minimum to save it, yet he continues to expouse his politics beliefs about it. He comes off as very preachy and due to this I struggled to empathize with the character, and in the end started to be annoyed by every sentence he spoke.

I feel bad for his AI assistant and daughter T.I.A., who later becomes his romantic partner. I feel almost dirty myself by reading it, as they mutually manipulate eachother to get to this point.

If you value your sanity, question reading this.

I thought this was a space opera, but still good

Starts of negativistic and a bit ridiculous but then switches to idealism, kinda weird but acceptable. I gotta say I was disappointed when the focus really came to romance and psychology(I only now see the tags) as I was expecting a space opera. There are still elements of it that were quite interesting and you can always skip the romance, which I did, most of it anyway. As for psychology, not that it's badly done but I've seen enough it in Star Trek and the rest that I'm not longer interested in the rights or emotions of AI.

The quality is well above royalroad standard, so if you're a picky web novel reader like me, as ironic as that is, you shouldn't have complaints unless you're not interested in sci-fi.

It wasn't too exciting all over, but a nice read. The first developments on earth were kinda rushed but kinda long for just a setup, it wasn't brilliant but not bad. The rest hower was interesting, development of the AI felt partly really good partly so so ~too quick. The group they had contact to on earth was well done. Very well done. The last stretch was building up more anticipation for what comes after which is the sequel...

For me it is not 5 stars, but it was worth the binge read :-)
Maybe the sequel gets 5 stars.

Somone related t his to Ayn Rand. As i am interested in that kind of "system philosophy" it sparked my interest since i usually dont read sci fi. especially on royal road. I have some of her in my bookshelf but havn't brought myself to read it yet. Maybe it is time to do so :)

I just finished your book and I have to say I have not experienced happy tears like that in a long time. Thank you for filling me with a new dream. I will aspire to become the Doctor Hawthorne Crenshaw of this world. I Rate Leaving Earth: 6/5

I would recommend it

Tbh I don't normally read this type of fiction or leave reviews so bare with me. The story is about a paranoid scientist who convince other scientist that they need to leave the planet it's doomed...turns out he wasn't paranoid and they leave successfully.with some of mankind's brightest and smartest they leave on and adventure in cryo sleep. Idk what else to say without spoilers. I'll just say it's kinda slow if you're into action but it's a very good read... The only complaint I have is about reactions to some things that happened but I mean I have 4stars...(I rarely like reactions in most novels. Other then that character building was great and the few charctcharin the etoryhave a fleshed out character which is nice)

World on the verge of chaos- Check

Can't really say much more without giving this beauty away, just read it! Its amazing!!!!

Saddened by it ending

A beautiful read of a bleak but likely future.
nearly every chapter is a time-skip, but when working with (mainly) only 2 characters spanning thousands of years it is kind of necessary.
Character growth is therefore very pronounced, but still feels fluid without distracting from the story.