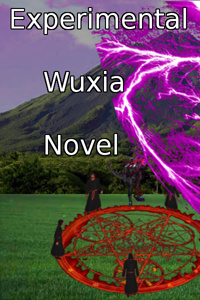 Deep at night, high above the commoners, below a rift in space and time, a group of five work a summoning.

Here’s a story where poking the author actually gets you a response!

An interesting story about an alien and a girl with a pokey stick. Quality is good, word flow is nice, the occasional typo every chapter or two. Just poke the author in the comments to get them to fix it. Poking the author for replies and more chapters also works. Tested and proven by me! So come join me in poking the author!

A very unique mix of Wuxia, Sci-Fi, and LitRPG

The story follows several different characters, but broadly speaking, it is about a small alien creature from a very advanced scifi culture that accidently gets sucked into a wuxia cultivation world. As he's pulled into that world, his high tech power armor is stripped off and scattered into various pieces.

That happens in the intro, so it's not much of a spoiler. I wont go into much detail as to what happens next, but the rest of the story is about the various people the alien meets, some of whom want to help him, others think he's some sort of demon. The alien isn't really the main character so much as he is the unifying thread that holds the story together.

Altogether, I would say the quality of the writing is good. the descriptions of the various scenes are detailed, the dialog is engaging. There is a lot of dry humor in how the absurdity of the whole situation is described, with all the characters having a limited understanding of what they are dealing with that almost brings to mind "The Hitchhiker's Guide to the Galaxy".

If you are willing to just sort of accept the strangeness and multiple POV's, the story is very enjoyable in a bizzare sort of way.

A very interesting read, highly original, like nothing I've ever read before. It could definately use some polish, and you need to go in to it with an open mind about what counts as a narrative structure, but overall, I liked it.

Would recommend you check it out just to see the weirdness on display. The quality is good, and I thought the small alien was a really likable character, who does come across as an alien who has been stranded on a place he doesn't quite understand.