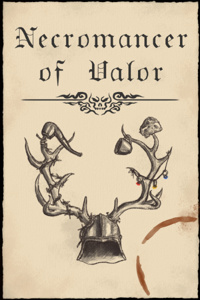 Anastacia Mournvalley is a born and raised necromancer, and a powerful one at that. She had never liked the way necromancers lived and so escaped her home country with the aid of an adventurer called Gilbert, She had hoped to start a fresh life as an adventurer in the city of Valor. With her upbringing still haunting her it turns out to be a lot harder than she thought. Luckily she has a few new friends by her side.

Go check out the rest of her art from the link!

Simple with minimal thought or detail

It is mildly entertaining, but the writting style is far too simplistic and is seriously lacking in detail. They see an ogre instead of the deer they were looking for she asks to run and he agrees then we go into a 2 paragraph fight afterwards the quest giver mentions that it's not a deer and the chapter ends. No anger over nearly getting killed on a simple quest, no detail in the fights or in the surprise of the MC, just "this thing happened" then "now this thing happened".

Also for some reason the deer quest yeilded 1500 gold, the food bought at the tavern was paid for in silver, the MC was propositioned with 3 gold, and a few peices of clothing cost 1200 gold. The economy makes zero sense.

Most enjoyable characters I've ever encountered.

A story where you never know where the next laugh will come from. The story and the writing style does it many aspects prevent it from becoming a true masterpiece, but the characters are some of the most enjoyable characters I've ever encountered. All the characters feel alive and serve a purpose, and will make the somewhat lacking story shine nontheless.

If I could I'd give the character score a 7 out of 5, but it still makes the whole read a solid 5/5 even when other aspects arent quite 5/5. It's not just the main characters that are amazing either, side character and the like feel alive, fresh and funny. Improve the other aspects and you will truly write masterpieces that excell in every area.

One of those undiscovered beauties

One of those rare books on Royal Road that is really good but for whatever reason has not been picked up by the majority of people. I assume its because this work went through a rewrite. I would take the older reviews with a grain of salt as a result.

2. Unique approach to monsters with Goblins having more in common with Clash of Clan goblins then more traditional evil Goblisn.

1. The setting, its odd, in the sense that its definately there but it feels like the author has only put enough in it to cover imediate questions and the plot but not much beyond that. I would say its the difference between building a world and building a stage. I dont personally mind too much as it means the story is not weighed down by world builder but for others I imagine it would be dissapointing.

2. The pace, its really quick atleast by Royal Road standards.. as a result a lot happens in the first 137 or arc 1. Enough that most would consider its a full series of events.

All in all, definately give it a read.

Reviewed at: Chapter 142 - The dangers of gambling

Hillarious. For all the writers worry about about their writing style you can see the continued improvements. Also the story is quite funny and interesting. Give it a go it's worth it.

Some minor grammar mistake, nothing much. The character description needs some work too, I dont have any idea how Gilber or Anna looks like.

But I like the idea, keep up teh great work.

Read this book, for the goblins.

This book is pretty decent.

It has some funny moments that focus can be somewhat imperfect.

However the worldbuilding and exceptional humour here are superb.

It does have some faults and is far from perfect , spoiler alert certain chapters contain the worst spoilers and hopefully one day that god of unwanted stuff will stop spoilering the story should the author deem it (happens about chp100) ..

The names of chapters though are on point and this book had several funny moments so read it .. do it for the goblins.