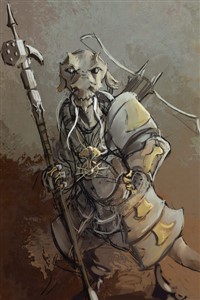 Tried rearranging the epilogue a bit and added a few new things.  I still think it needs a bit of work somehow, but hopefully it is a bit better than the last one.

Two months. A lot can happen in two months. The new expansion was a huge hit, the draw of tripling the game world too much for most to resist. New subscriptions had increased by 20%, while inactive game memberships had been reduced by nearly 75%. The original dungeon was scrapped, but the outcry from people who had watched the show and wanted to test their skills was so high that the developers brought it back. The bosses aren’t quite as hard, and the divine boosts are not there anymore, but people still love challenging the Shadow of the Progenitor. The Needler’s guild, led by Mr. Whiskers, was unsurprisingly the first to finish the raid. They received a special statue for their guildhall of my character. It is the first thing to greet people when they enter, and has a plaque challenging their members to always strive to improve.

The drow loved the attention they got for their help in the raid, especially the challenges from Lolth. Of all the monster races to choose from, nearly one in three start out as drow despite the difficulties. Cinder still hasn’t ascended to the title of archmage, but he hasn’t given up. He is taking the slow route, working hard to be one of the few who has managed to obtain all boosted elements before challenging the current archmage. Lady Fisticuffs became the first traveler to become a drow General, and has been gleefully leading raids through portals to the Light Phase. Blackthumb has accepted his quest for evolution, though he hasn’t managed to finish it yet. He is the Master of Poisons in the Dark Alchemist’s Guild. There is some trade of knowledge between phases, but for the most part the Dark and Light Guild counterparts keep each other at arms distance. Vicda was just barely starting to show her pregnancy, though you had to look pretty hard to see the bump.

Derrick is having a blast with his Roving Raid boss status. His favorite picture is an oil painting of multiple raids running away in terror the first time he pulled out his equipment. So far he is undefeated, but the light siders are getting stronger and will eventually overcome him. He has a running bet with Frank that he won’t lose unless they bring multiple raids at the same time, one I am confident he will win.

Jon entered a special program with permission from both Arctic Storm and the medical agency that was overseeing the children’s growth. The confidence boost the children got just from their brief stint in the dungeon is something the doctors are wanting to explore, and Jon is at the heart of it. They have a sandbox server to play around in, and Jon is one of the caretakers in their game. His and Phoebe’s Christmas card this year was them in their characters. Jon’s character was doing curls, only instead of weights he had six goblin children on each side of his staff, giggling uncontrollably. Inkler was in the background, eyeing Jon’s tail while several other children were trying their best to tackle Phoebe.

Phoebe still played her character as normal, and was trying to become the second Roving Raid boss. I didn’t know it, but the seal on the god Sin who gave her power had greatly weakened, and she was trying to free him. The quest the devs thought up was incredible, and part of it included her sneaking deep within the Gray Phase to find some hidden ruins. If she can manage it, Inkler will become a companion animal for Sin. The divine realms have no idea what’s in store for them if they finish the quests. Especially if there is a version of catnip in the game. Hmmm, that could be something to work in somehow now that I think of it.

After losing my character in spectacular fashion, my time as a beta tester came to an end. Frank and several higher ups were impressed with the idea for the Sundered Worlds, and opted to transfer me over to the development department. As soon as I was out of her department, Emily and I tried out dating for a while. Though it didn’t really work out, we still remain friends. She even convinced someone to make me a paperweight of Angus for my desk, the scythe doubling as a letter opener.

Life as a developer is interesting, especially with Frank at the helm. He still loves to have his Friday afternoon parties, but the department is great about not pushing me. I’m working through my troubles from the alcohol incident, but it’s slow going. Instead of tracking down epic plot lines in game, I now get to set up the quests and figure out what enemies will be found along the way.

“Done daydreaming?” My partner Tom asked as he plopped down in his own chair nearby.

“Yeah, sorry.” I replied, moving back to the computer. “Any luck with your idea?”

“Not particularly. Most of the really fun Native American myths revolve around Coyote and the other tricksters. How about you?”

“Almost the opposite. Too much to go through, though there is sure to be something in there somewhere.”

“Oh, woe is me!” He mocked, placing a hand to his forehead. “I’ve got too many sea myths from the Pacific Island mythologies! Whatever shall I do?”

“I hear ya, there’s no such thing as too much source materials.” I chuckled. “Maybe we should nix the American mythos for the sea creatures update, and go someplace else.”

“That’s the look of a newbie with an idea. Whatcha got?”

“Prehistoric.” I said smugly. “Before the drow enchantment, people couldn’t explore the seas. Who says there can’t be some massive prehistoric beasts lurking in the deep, dark places?”

“I like it.” He nodded. “Now, we’re a pretty tight knit bunch but this is something you always need to be doing. New idea gets sent via email to your own folder, your partner, and up the chain so that you get credit for it. You remember the three best letters in the alphabet?”

“C.Y.A.” I answered with a groan, tabbing over to my email. Time to get back to work.

Bio: I'm a chemist that gave writing a try, and loved the results. Everything is mostly for fun right now, though I might try and get some things published eventually. Certain traits of my daughter have made it into bits of my stories, and she sometimes keeps me company when we both have trouble sleeping.